Here’s Why They’re Coming After Your Ministry, Church or Synagogue

Two law professors spill the beans on an intolerant agenda. 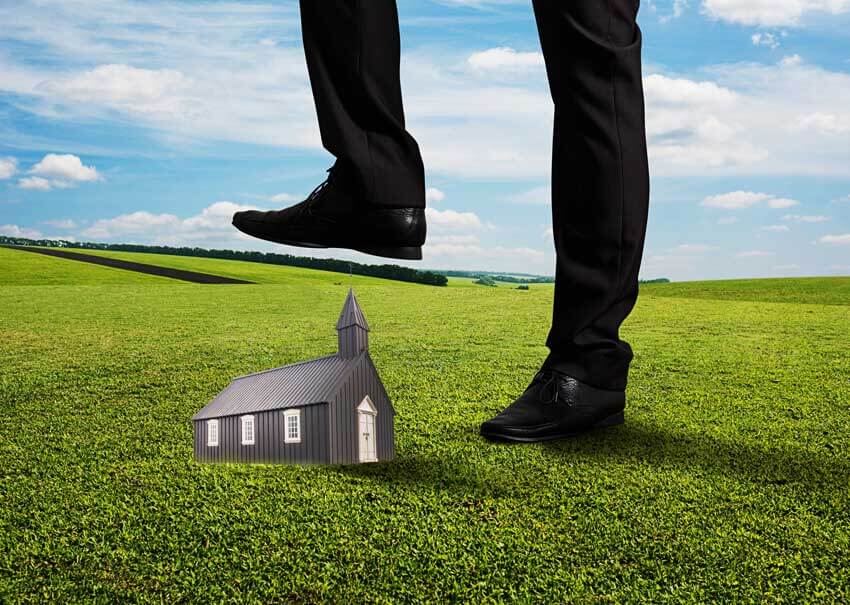 Are they coming after your house of worship or ministry? And who are “they?’

If you live in Iowa, up until two weeks ago “they” would have been your own state government, in the form of the Iowa Civil Rights Commission, a body empowered to interpret, apply, and enforce state civil rights laws and assess penalties for offenders.

Alarmingly, the Commission originally indicated that the state had a right to dictate how churches teach, preach, and operate regarding important doctrines such as gender and sexuality. First Liberty attorneys stepped in. For now, the Commission has admirably revised its application of the law and the Iowa problem seems to be corrected.

The aggressors are a small but powerful elite of legal activists, radical lawyers, government officials, and influential law professors. They question whether your First Amendment right to “free exercise” is even protected within the four walls of your house of worship.

Mark Tushnet is one of them. A leading scholar of constitutional law at Harvard Law School, former Supreme Court clerk, and coauthor of a highly regarded book called Comparative Constitutional Law, he recently advocated a take-no-prisoners approach to non-compliant traditionalists and other social conservatives.

“The culture wars are over;” he writes, “they lost, we won.” By “they” he includes you and, perhaps, your congregation. He went on, “For liberals, the question now is how to deal with the losers in the culture wars.” His answer is to take “a hard line.” He says:

He advocates a “scorched earth” campaign of bringing cases before the federal courts to destroy large sections of the legal protections claimed by traditionalists in the culture wars, including claims of religious liberty. Christians and others who want free exercise of religion to shield them from participating in abortions, same-sex marriages, and other violations of conscience would likely get no mercy. And that could include your church or synagogue, or a favorite ministry.

In fact, some legal experts are floating the idea that church sermons must be policed. One such influential law professor emerged during the Iowa Civil Rights Commission controversy.

Yes, sermons. She stated that “situations could arise” where pastors’ sermons would constitute legally sanctionable speech and thus not “constitutionally protected” as other sermons would be.

Would this mean government monitoring and censorship of churches? Would it mean government action in response to complaints filed against churches by offended parties sitting in pews or listening over the internet? The article didn’t indicate Professor Strassberg’s opinion on the method of enforcement, but such crackdowns on church sermons seem to be a logical direction of her comments.

Further, Prof. Strassberg was even more ardent about forcing churches to allow men identifying as transgender to enter church bathrooms and other facilities, even if this violated church doctrine, saying churches “would not be protected by the First Amendment.”

CHANGE RELIGIOUS VIEWS, OR ELSE

“But these are just law professors,” you might say. “What weight do they carry in the real world?”

The answer is: a lot. Prof. Tushnet clerked for Supreme Court Justice Thurgood Marshall and helped shape the Roe v. Wade decision. Prof. Strassberg specializes in a field of law that is at the center of mounting litigation. But more to the point, their arguments are echoed by powerful litigators such as Donald Verrilli.

Verrilli is currently the Solicitor General of the United States, the top litigator for the federal government. In arguments before the U.S. Supreme Court, he has argued that:

The message of such men and women is clear: you and I either change our religious ways, or give up our freedom.

LIBERALS DANCING ON A NON-EXISTENT GRAVE

“The good news,” says First Liberty Institute President & CEO Kelly Shackelford, “is that Professor Tushnet’s analysis and his prediction are wrong. In fact, we’re proving his prediction wrong. First Liberty continues to win over 90 percent of our cases. If we’ve lost the so-called culture war, these victories shouldn’t be happening. The law and America’s heritage and history are on our side. Our unique legal model harnesses the best attorneys to keep winning because the laws are still on our side. It’s not easy, but it’s far from lost.”

The bold statements by Tushnet and others point to the high stakes of the conflict, and all-out commitment they have to impose their worldview. An equally dedicated response is the only thing that will meet this challenge, and First Liberty exists to provide that response in courts across this nation as the battle rages.

Christopher Corbett is VP for Strategic Communications at First Liberty.