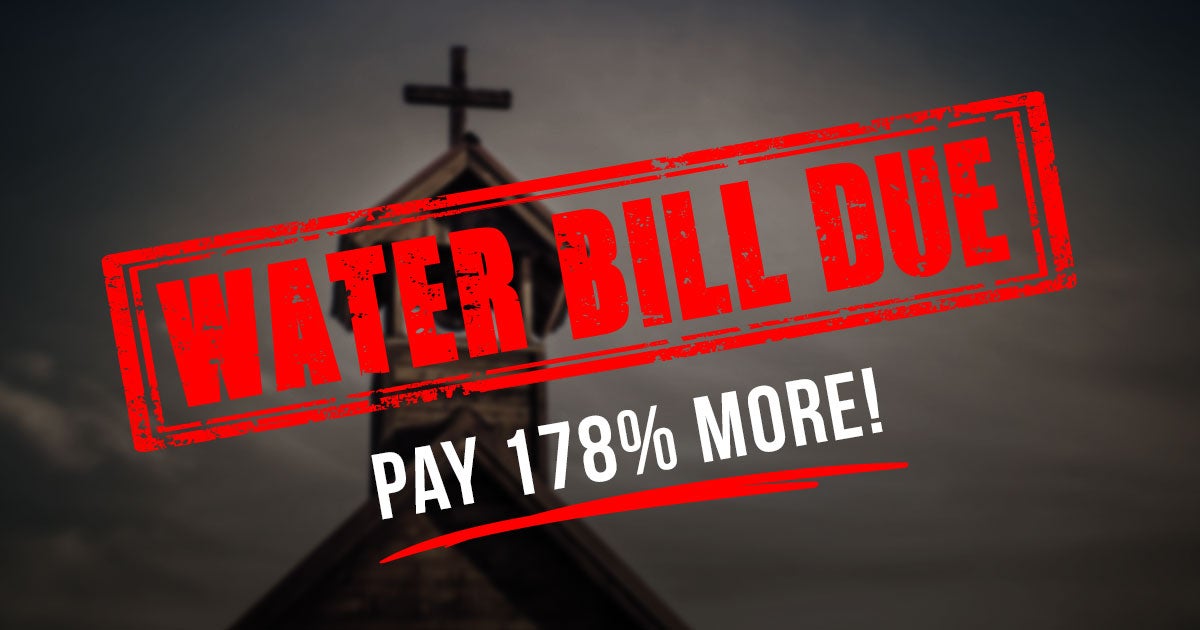 In Texas, it’s illegal for local governments to tax churches and nonprofits. Shockingly, the City of Magnolia, Texas seems to have forgotten that.

Last year, Mayor Todd Kana and the Magnolia City Council voted to revise the city’s fee schedule for water services, creating an expensive “institutional” fee that only applies to churches, faith-based schools and other nonprofit organizations.

The city essentially created a tax and called it something different, knowing fully well that they couldn’t impose a sales tax, property tax, or other taxes from which churches and non-profits are typically exempt.

That led First Liberty’s legal team to file a lawsuit against the city on behalf of three churches that have been victimized by these excessive fees.

And just last week, First Liberty and our volunteer network attorneys from the law firm Baker Botts went to court to remind city authorities of the law, and to defend the constitutional rights of churches.

In search of more revenue, the City of Magnolia, Texas developed an underhanded scheme to wring more money out of tax-exempt organizations. Their plot came to fruition as they increased the water and wastewater fees of local churches and nonprofits to significantly higher rates than that of commercial businesses. In one case, a church’s water bill increased 178%.

Even more appalling is the fact that city officials openly acknowledged their discriminatory intent. Magnolia’s city administrator Paul Mendes publicly stated the water fee scheme “would allow the city to collect funds from these entities in place of taxes or other fees.”

Though local churches objected to this unconstitutional financial burden, city officials persisted in their unlawful acts. They went as far as to travel several hours away to Austin, the state’s capital, without the churches knowing, where they sought approval for their water fee scheme and to block out any possibility of a legal remedy. Only when the local congregations sued Magnolia several months later did they learn of the city’s subterfuge.

That’s why last week, First Liberty’s’ legal team argued at the Texas Third Court of Appeals that cities must, at the very least, give due process to churches before raising their water fees.

Not only are these charges unconstitutional, they’re simply bad policy and starkly unfair. In local communities across America, churches, faith-based schools and other similar nonprofits provide critical assistance, benefits and resources for people in need. Essential services often provided include financial aid, housing, childcare, educational and professional training, and a host of other critical community aid.

In short, churches and nonprofits already do so much to help the community—that’s why they’re tax-exempt in the first place.

Reputable studies have documented how much faith-based groups contribute to the economy in the United States. According to this research, faith-based groups contribute more to the U.S. economy than the top ten technology companies—including Google, Apple, and Amazon combined—producing a total revenue of $1.2 trillion each year. If we were to look at this figure in terms of gross domestic product (GDP), U.S. religion, as defined by researchers, would be the 15th largest national economy in the world.

Burdening churches and faith-based nonprofits with extra fees keeps them from carrying out their essential work. In the end, everyone—including the state—suffers the consequences.

While this may seem an isolated and small incident, the truth is that there’s an All Out assault on religious freedom across the country. State, county and municipal governments continually place extra burdens on religious ministries, houses of worship and faith-based schools—at times in the most blatant and discriminatory ways possible:

First Liberty Institute is fighting to reclaim religious freedom for houses of worship and faith-based organizations that help make our communities better—like the churches in Magnolia, Light of the World and the Jewish community in Airmont. Your gift today will help ensure we can provide the best legal representation at no charge. Please go All In for churches and houses of worship by making a critical donation now.

First Liberty is the first line of defense for churches and faith-based nonprofits.

Will you go All In to help us reclaim religious freedom for religious institutions?