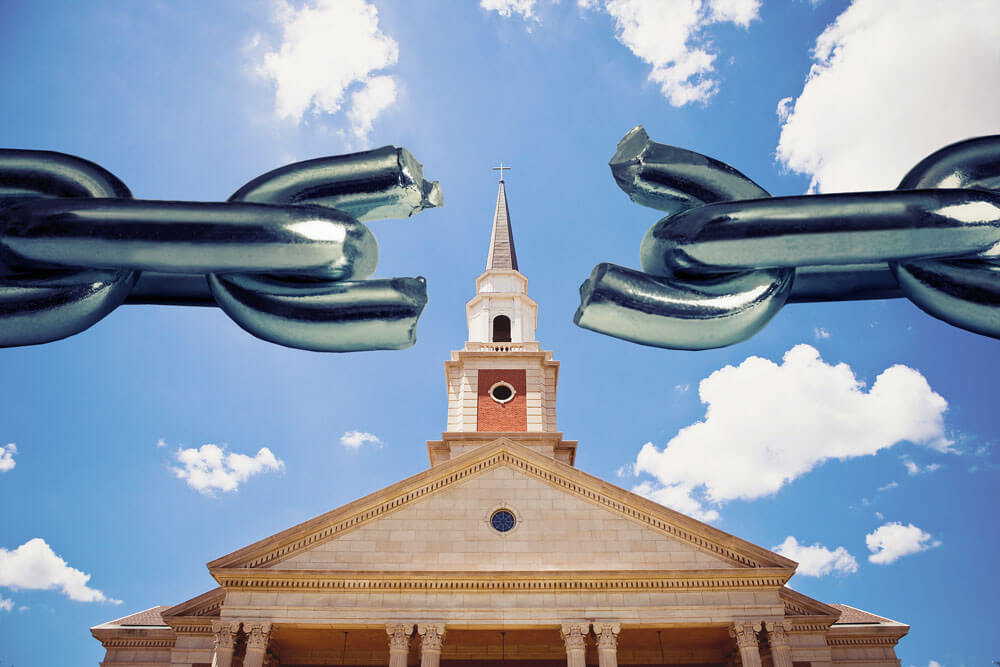 Before Monday, June 5, ministries and church-affiliated organizations feared that the federal government might severely restrict or even end their work due to suddenly subjecting them to suffocating regulations and red tape.

For years, these ministries and church-affiliated organizations were exempt from certain regulations under the Employment Retirement Income Security Act (ERISA) which was enacted by Congress in 1974. This became known as the “church plan exemption.” But an onslaught of federal lawsuits against several such ministries and church-affiliated organizations threatened to take away the church plan exemption. These lawsuits questioned whether some ministries were religious enough to qualify for the exemption.

But after June 5, the collective sigh of relief was almost audible. On that day, the U.S. Supreme Court ruled 8-0 in Advocate Health Care Network et. al. v. Stapleton et al. that the church plan exemption applies to ministries and church-affiliated organizations.

What does this mean? At a practical level, the Supreme Court’s ruling ensures that government agencies will not be able to burden ministries and church-affiliated organizations with ERISA regulations simply because they are not an actual church, even if they are closely affiliated with a church.

First Liberty, as a recognized expert law firm in religious liberty, participated in an important amicus brief in the case, representing a vast array of religious organizations. First Liberty’s press release in response to the Supreme Court’s opinion included the following statement from Justin Butterfield, Senior Counsel and Director of Research and Education for First Liberty Institute:

The History of the United States of America is one requiring the government to respect the religious freedom and autonomy of its houses of worship and religious organizations. The Supreme Court’s decision today respects that great history and tradition, allowing churches, synagogues, mosques, and religious ministries to pursue their religious mission without the weight of government bureaucracy and regulation hindering their efforts and intruding upon their mission.

The ruling is good news for the over 200 ministries that are First Liberty clients, as the decision is consistent with the principle that the government cannot dictate whether a religious institution is religious enough to qualify as a church. It also means that church-affiliated ministries qualify to be exempt from the burdensome ERISA regulations and therefore avoid ERISA’s government entanglement and intrusion.

First Liberty participated in an amicus (friend-of-the-court) brief that represented several religious colleges and organizations, including the Council for Christian Colleges & Universities (an international association with over 140 member institutions), the Cardinal Newman Society, Belmont Abbey College, Colorado Christian University, John Paul the Great Catholic University, Liberty University, and several others. The brief was the only amicus brief to represent religious educational institutions.

The brief stated that church pension plans have a long tradition of being free from government regulation, with roots dating to the American colonial period. The first non-religious employer retirement plan, however, came much later in 1875.

The brief stated that the ERISA law was originally enacted in 1974 as a reaction to the failure of several private pension plans. Some plans—including church plans—were exempted from ERISA regulations. However, the original “church plan” exemption was narrow and did not apply to organizations that were not identified as churches. ERISA was amended by Congress in 1980 to ensure that these church-affiliated organizations could qualify for the church plan exemption.

In the Supreme Court’s opinion, Justice Kagan upheld the meaning of the text of the amended law. She also noted a requirement that exempt plans be established only by churches would cause the IRS to have to determine whether an organization is or is not a church. She stated:

A church-establishment requirement necessarily puts the IRS in the business of deciding just what a church is and is not…. And that requirement, by definition, disfavors plans created by church affiliates, as compared to those established by (whatever the IRS has decided are) churches. It thus makes key to the “church plan” exemption the very line that, on the hospitals’ account, Congress intended to erase.

CHURCH AND CHURCH-AFFILIATE EXEMPTIONS ARE CONSTITUTIONAL

The brief in which First Liberty participated also responded to the claim that church plan exemptions to ERISA violate the Constitution by favoring religion over nonreligion. If adopted, this claim would have severe repercussions for tens of thousands of religious ministries. But claims that religious accommodations violate the Establishment Clause are simply not true, the brief noted, as the Supreme Court “has repeatedly held that the government may accommodate religion without running afoul of the Establishment Clause.”

In addition, returning to the narrow church-only exemption as desired by the plaintiffs would actually conflict with the guarantees of the First Amendment. The brief pointed out that it would “privilege religious organizations that unify their financial, ecclesiastical, and other operations in a single ‘church’ organization over those” that do not. It would also require organizations to restructure themselves in order to be exempt from ERISA, constituting “a serious intrusion into religious organizations’ internal affairs—a result the Religion Clauses do not permit.”