The Most Impactful Legal Victories of 2022 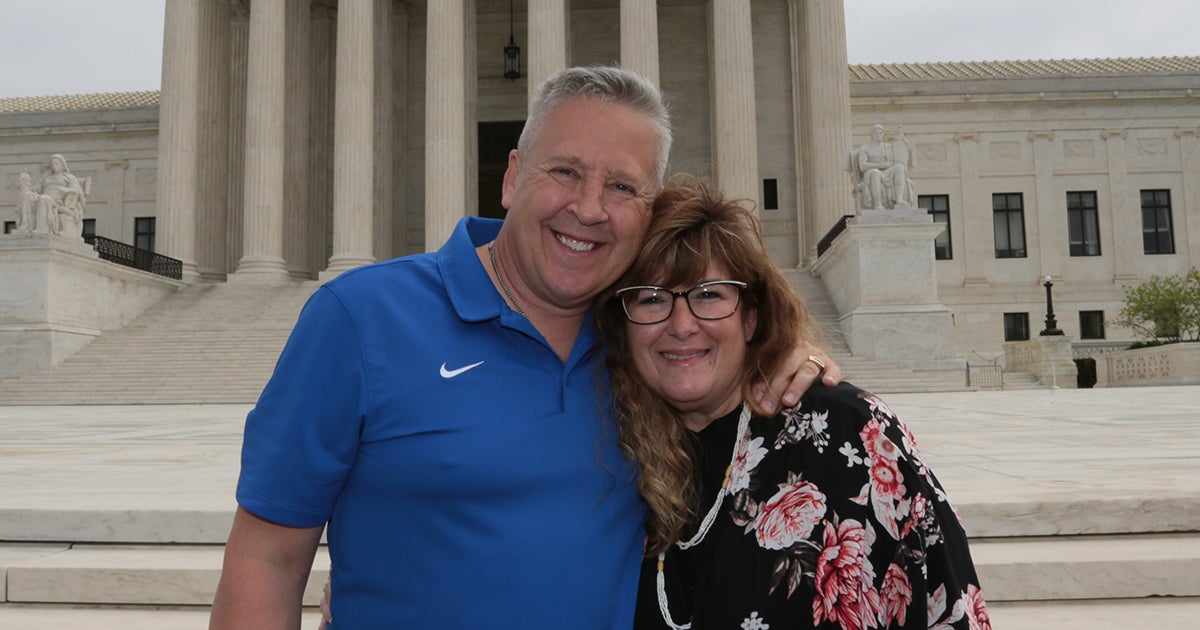 2022 has been a remarkable year in the fight for our constitutional freedoms. Every American is experiencing more religious freedom today than we’ve had in decades. Religious expression is thriving across the country. This is the greatest resurgence of religious liberty in the last 50 years.

This isn’t just the product of our two major Supreme Court victories that we won earlier this summer. It’s also the combined result of all the wins we achieved in this incredible year.

Thank you for continuing to invest in and support First Liberty. We are grateful to you and everyone who’s faithfully been by our side in this historic year. All our success reveals something special: When we work as one team, in one fight, with one purpose, through God’s grace, we can accomplish great things.

Here are over a dozen impactful legal achievements you played a part in this year:

Coach Joe Kennedy’s case (Kennedy v. Bremerton School District) is a landmark Supreme Court win that upheld Coach Kennedy’s right to take a knee in quiet, solitary prayer. With this win, he can finally return to the place he belongs, coaching on the field and quietly praying by himself after the game. This ruling changed the future of religious freedom, setting a major precedent affirming that the government cannot censor private religious expression and overturning an almost 50-year-old bad Establishment Clause precedent.

Our Supreme Court victory in Carson v. Makin—our Treat Children Fairly case—is a win that opens the door wide for school vouchers and other government assistance for all private schools, including those that are religious. This was a huge victory not just for religious education, but also to ensure that government assistance programs treat religious organizations and businesses the same as everyone else.

We secured two important victories in federal court for our Navy SEAL clients. First, a district court judge ordered that the DoD cannot punish our clients under the DoD’s vaccine mandate while the case progresses. Second, the court expanded the lawsuit to a class action, protecting thousands of Navy personnel with religious objections. Following these wins, other federal district courts soon extended protection to thousands more service members from the unlawful mandate. Our wins helped set in motion a streak of victories to protect service members across three branches of the military—Air Force, Navy and Marine Corps—as these cases move forward.

4. Supreme Court Takes a Jab at the Biden Administration’s Attack on Freedom

The U.S. Supreme Court blocked the Biden administration’s vaccine mandate on companies with more than 100 employees, including religious ministries. This illegal expansion of government power threatened the freedoms of religious organizations and people of faith in the workplace. The ruling brought huge relief to First Liberty’s clients—Daystar Television Network, Answers in Genesis and American Family Association—three religious employers that challenged the mandate in consolidated cases.

The U.S. Court of Appeals for the 5th Circuit upheld Judge Wayne Mack’s practice of recognizing volunteer chaplains who open court sessions with a brief invocation. This is a tremendous victory building upon our Supreme Court victories for Coach Kennedy and the Bladensburg Peace Cross that brings an end to years of harassment against Judge Mack.

6. The Bible Stays and Our Veterans Win

In our POW/MIA Remembrance Bible Display case, a federal court dismissed a lawsuit filed by the deceptively named Military Religious Freedom Foundation. That group sued to remove a donated Bible displayed on a POW/MIA Remembrance Table at the VA Medical Center in Manchester, New Hampshire. The victory means the Bible stays. This is a win for our clients, the Northeast POW/MIA Network, a private organization of veterans that owns and maintains the display.

Pastor Paul Malcomson shepherds Light of the World Gospel Ministries in the Village of Walthill, Nebraska. Our attorneys reached a favorable settlement that will allow the church to build a multi-use facility on Main Street for worship, ministry and commercial businesses.

8. San Diego Symphony Agrees to Stop Discrimination Against a Church

First Liberty secured a victory for Awaken Church in San Diego. For a Christmas program, the church requested to rent the Rady Shell, a concert venue owned by the San Diego Symphony Orchestra Association. The association refused, saying it would not rent to religious organizations. We sent a demand letter, explaining that these actions were illegal. Within days, venue officials changed their decision and Awaken Church held their Christmas program before over 15,000 attendees, with many coming to faith.

A federal district judge blocked the Village of Atlantic Beach, New York from seizing property owned by our clients, Chabad of the Beaches, through eminent domain. This is a preliminary victory for this Jewish congregation and an important step forward to help restore freedom so the congregation can worship, serve and be a light in their community.

First Liberty secured a victory for Inara Ramazanova, our client who was wrongfully evicted from campus housing simply because she shared information on social media about religious accommodations for COVID-19 vaccinations. We reached an agreement with Oakland University in Michigan that brought the case to a positive and amicable conclusion. This win clears Inara’s record and her name, ensuring a bright future for her after graduation.

A Florida circuit court issued a ruling in favor of our client, City Walk Urban Mission. The judge tossed out a prior decision that denied City Walk’s application to operate a homeless shelter in Tallahassee. The ruling said the local planning commission failed to follow the law and sent the case back to the commission for reconsideration.

Vida Real Church in Somerville, Massachusetts applied to open a private, religious school. Members of the Somerville Public School Committee voiced opposition to the church’s religious beliefs. After we intervened, the committee approved the application—which means the church will be able to open the school.

A California judge granted a legal victory for our clients, the Hebrew Discovery Center, a small Orthodox Jewish synagogue in Woodland Hills, just outside Los Angeles. The judge dismissed a lawsuit brought against the synagogue by activists. The activists sought to end a centuries-old atonement ceremony practiced by the synagogue.

As we head into 2023, there are many important legal battles on the horizon. We have two Supreme Court cases pending—Sweet Cakes by Melissa and our defense of postal worker Gerald Groff. It’s possible a response could come as early as the first week of January. This means the Court could announce if it will hear oral argument or potentially issue a written decision in these vital cases.

We pray and ask that you would give generously to First Liberty. Your gift this month—whether it’s $5, $50, $500 or more—is going to make all the difference. The multiplied impact of your donation is evident. With your support, and God’s favor, we won two cases at the Supreme Court…and together, we can win two more in the New Year. 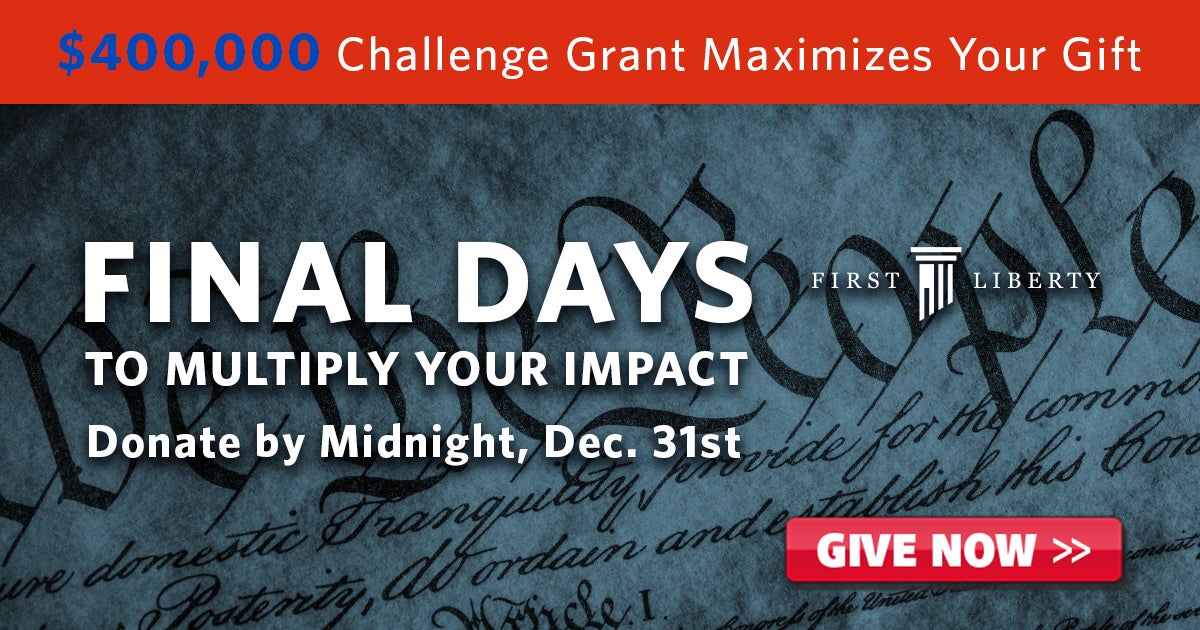