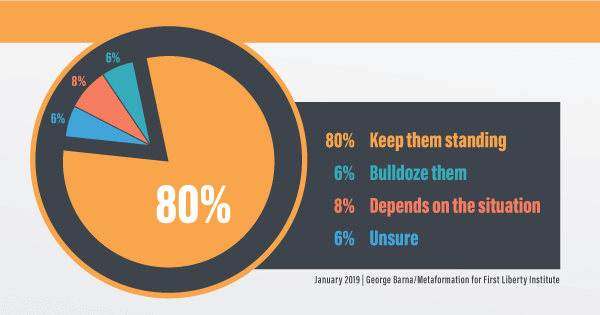 Have you ever visited a veterans memorial?

For those of us who’ve had the privilege of seeing one up close, we can share with you that it is without a doubt an awe-inspiring and humbling experience.

Whether you’ve visited Arlington National Cemetery or have stopped at one of the thousands of memorials scattered throughout our great nation, visiting a veterans memorial really does evoke a sense of respect for our men and women in uniform.

After all, it is their service and sacrifice that secures our freedoms – including the freedom to live out our faith.

But this isn’t just an anecdote or a story you’ll hear from us.

There’s evidence showing that this is a widespread sentiment in our country.

In fact, a recent study conducted by pollster George Barna and Metaformation, Inc. found that an overwhelming majority of Americans regard memorials as part of our history and consider them important so that we do not forget the price of the freedoms we enjoy.

In this special edition, we’re giving you insider access to the various findings of that study – and we’ll give you an exclusive break down of what the data reveals about Americans like you, your understanding of religious liberty, and why millions of people want veterans memorials to remain standing.

In the end, what does all of the data above mean? And why does it matter?

For one, it clearly shows us that Americans do not see veterans memorials with religious imagery as the government trying to coerce or impose a religion on people.

On the contrary, the numbers from this recent poll reveal that Americans have a profound respect for military memorials like the Bladensburg WWI Veterans Memorial, and that they want these structures to remain standing because they represent a part of our history and honor the sacrifice of America’s service members.

And of course, the results also show that Americans know what the Constitution says – and that it indeed allows veterans memorials with religious imagery to be built and displayed in public.

Share this article with your friends and family on social media today!