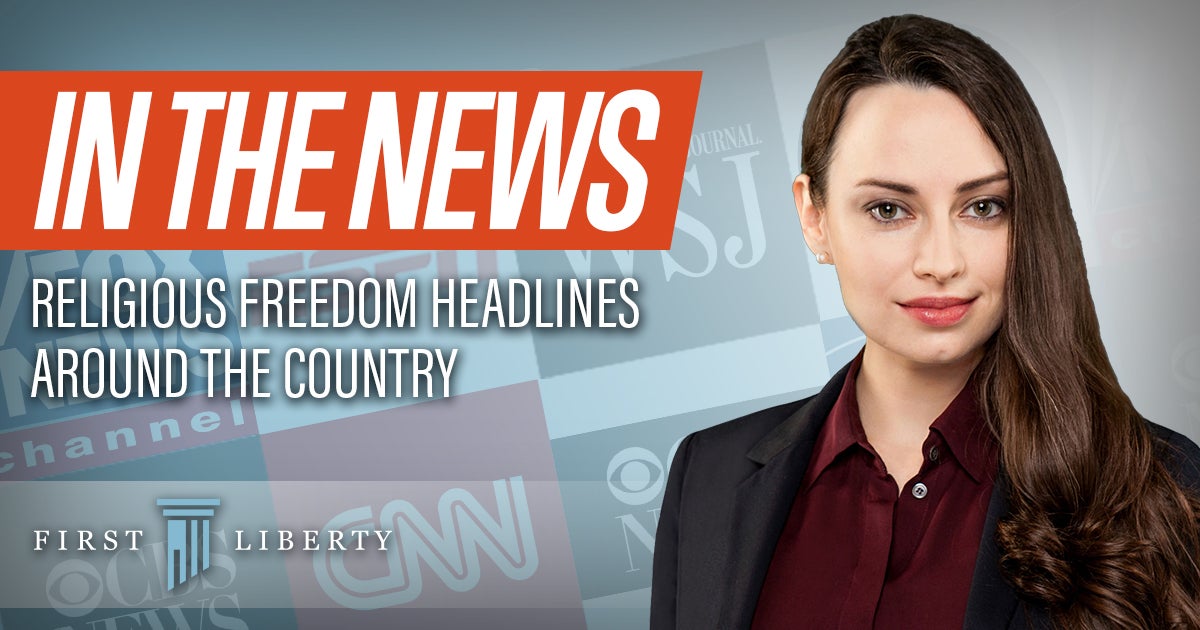 Fox News reports on First Liberty’s recent lawsuit seeking to block the government’s new rule allowing elective abortions at VA medical clinics. A VA nurse practitioner, Army veteran Stephanie Carter, is the plaintiff in the case. Under the new rule, Carter could be asked to provide abortion counseling to pregnant veterans or to prescribe the abortion pill. The VA’s  rule violates the First Amendment’s religious freedom protections for providers seeking a religious exemption to the rule.

First Liberty attorney Ryan Gardner wrote an op-ed for CNS News discussing our recent defense of a Nativity scene in Eureka Eureka Springs, Arkansas. A resident complained about the display because it was in a public park. First Liberty represented the organization that set up the display. With the exception of one or two years since 1950, a nativity scene has been on display in Basin Park. It was originally sponsored by the Eureka Springs chapter of the Beta Sigma Phi sorority, but last year, the sorority donated the nativity scene to the Great Passion Play, a Christian non-profit organization, to continue this longstanding Christmas tradition. Our attorneys met with the city and secured a permit for the nativity scene to stay up.

The Daily Wire reports: Christian actor Kirk Cameron celebrated after libraries that had refused to host him over his new faith-based children’s book reversed course. His publicist told Fox News that two libraries “caved,” confirming Cameron would be reading his book “As You Grow” at a library in Indiana and another near New York City. After they initially refused to host Cameron, he threatened legal action.

School Forces Christian Teacher to Participate in Students’ ‘Social Transition’ to Different Gender, Ejects Her from Building When She Objects

The Daily Citizen reports: English teacher Vivian Geraghty was forced to resign from her position at Jackson Memorial Middle School in Massillon, Ohio. She’s now suing her school district for violating her constitutional rights. Geraghty, a Christian, objects to calling a student by anything other than their legal name and pronouns that correlate with their birth sex. School officials, however, following a policy the local school board had adopted, ordered her to call two of her students by different names and pronouns to signify that they had “transitioned” to a gender that was inconsistent with their sex.

Texas Attorney General Paxton filed a lawsuit defending faith-based groups and the State of Texas from being forced to adopt political views that violate the religious liberty and moral conscience of faith-based organizations and limit Texas’s ability to help at-risk children.

Do Gen Z’s Views on Religion Put the Future Of Religious Freedom At Risk?

Deseret News reports: New research on American support for religious freedom protections holds good news and bad news for those concerned about the plight of people of faith. The good news is that most of the country is generally supportive of religious rights—especially when those rights ensure that members of minority groups feel safe living out their faith. The new research showed that members of Gen Z were less likely than members of other generations—often by a wide margin — to “accept and support” policies that protect the rights of people of faith, including religious business owners, to hold unpopular or controversial beliefs.

Healthcare Finance reports: A federal appeals court has rolled back a Biden administration proposed rule on sex discrimination in a ruling blocking a transgender care mandate.

The United States Court of Appeals for the Eighth Circuit upheld a North Dakota district court opinion in ruling in favor of Catholic health systems and associations, and the Religious Sisters of Mercy. The appeals court said implementation of Section 1557 of the Affordable Care Act prohibiting certain forms of discrimination in healthcare compels providers to perform and provide insurance coverage for gender transition, which infringes upon religious freedom.