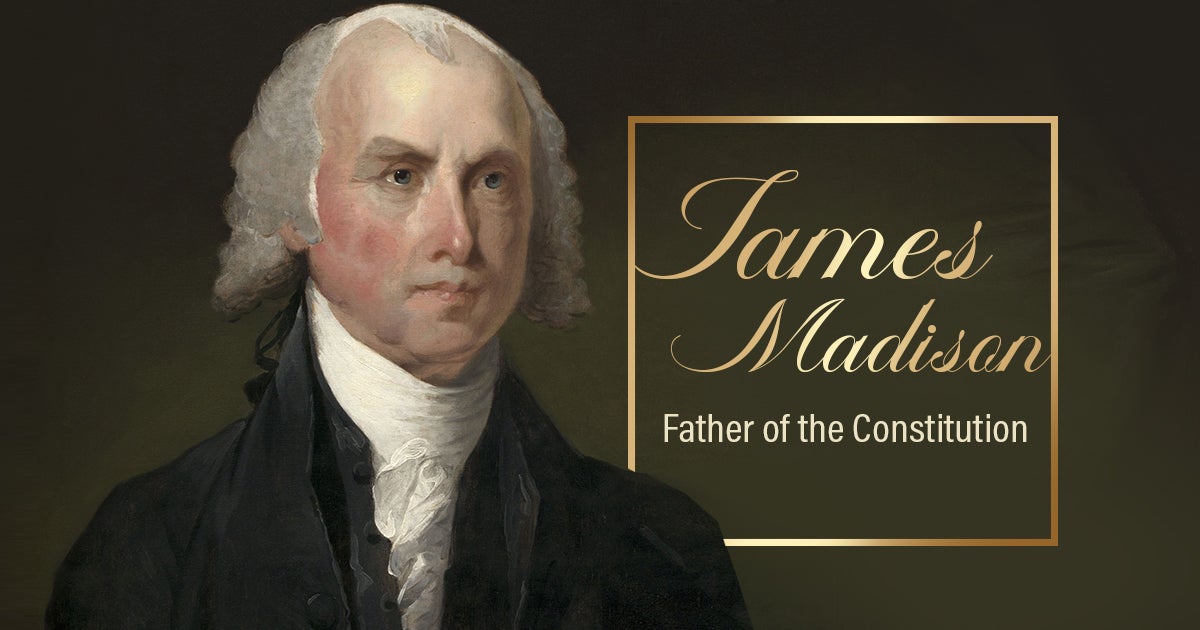 James Madison’s role as the major architect of the U.S. Constitution cannot be overstated.

Throughout our history, many scholars have called him the “Father of the Constitution,” and with good reason. When the Constitutional Convention began in Philadelphia in 1787, no other delegate was better prepared than Madison. He’d already spent years researching and refining the concept of a government that separated the executive, legislative and judicial powers. His proposals were the working model used by the Convention delegates, and his writings (namely those in the Federalist Papers) were central in the ratification of our country’s founding document.

Today, we can thank Madison for being the Founding Father who laid the foundation for religious freedom in our country. Because of him, the notion of free exercise became our national standard. His lifelong efforts ensured that citizens had the right to live according to their deepest convictions without government interference, and paved the way for Americans to freely and openly live out our faith.

So what were James Madison’s incredible contributions to our nation’s first freedom?

A Passionate Advocate from His Youth

James Madison was born March 16, 1751 in Virginia to a wealthy family of plantation owners. Like many Virginia families at the time, they attended the Anglican Church. Growing up, he witnessed the arrest and persecution of Baptist preachers and followers in his hometown. And at the young age of 23, Madison wrote a letter to his friend William Bradford, expressing his distress about the persecution of “these well-meaning men [who] were in jail for publishing their religious sentiments.”

These incidents fueled much of Madison’s passion to fight for religious freedom, and his formal education complemented his fervor.

Madison attended the College of New Jersey (later Princeton), breaking the Virginia family social norm in his time. Young, wealthy Virginians like him were expected to attend the College of William and Mary at Williamsburg. But if Madison had done this, he never would have studied under Reverend John Witherspoon, who shaped Madison’s view on the rights and freedoms of individuals as coming from God, not from man.

After completing his college education, Madison returned home to Montpelier, VA. At age 25, he became a delegate to the Virginia Convention and vowed to advocate for legislation that would protect religious freedom for all.

In 1776, Madison worked on an important foundational document known as the Virginia Declaration of Rights, a precursor and model for the U.S. Bill of Rights that would come years later. Madison proposed a small but profound change in the wording, which originally called for the “toleration” of religion. That seemingly harmless phrase essentially implied that there was one state-approved religion, and government would merely put up with others.

Madison wanted the toleration phrasing taken out, arguing that “all men are equally entitled to enjoy the freedom of exercise of religion, according to the dictates of conscience.” In the end, Madison succeeded and inserted the phrase “free exercise of religion,” which truly protected the right of an individual to follow his conscience.

His efforts didn’t stop there, however. In 1786, Madison’s political savvy and effective negotiation helped him succeed at ratifying the Virginia Statute of Religious Freedom, an important document Jefferson had written years earlier designed to protect religious liberty.

Father of the Bill of Rights

Three years later, as part of the battle to get the Constitution ratified by the 13 colonies, Madison drafted the Bill of Rights, including what was to become the First Amendment. In fact, Madison’s original draft included an ambitious protection of religious liberty, which stated, “The civil rights of none shall be abridged on account of religious belief or worship…nor shall the full and equal rights of conscience be in any manner, or on any pretext, infringed.”

Congress largely relied on Madison’s original draft, and the states subsequently ratified two principles — “no establishment” and “free exercise” — that protect one freedom: religious freedom as a fundamental, inalienable right for every person.

The final version that we know today—”Congress shall make no law respecting an establishment of religion, or prohibiting the free exercise thereof”—is less explicit in its protections than Madison’s original proposal, but it still clearly bears his stamp.

In addition to his passion for religious liberty, Madison underscored that “conscience is the most sacred of all property.” Because religious rights were central to Madison’s worldview, he saw the inherent link between freedom of conscience and freedom of religion.

In particular, Madison was convinced that keeping government out of the affairs of the church (or religion) was the only way that people could follow the dictates of their conscience. He viewed established state religion as a denial of the fundamental, God-given right of conscience. Due to this, he concluded that the institution of the church should be separate from the state and not directed by the government in any way, a principle that was enshrined in his original draft of the First Amendment.

What did America’s Founding Fathers really think about religious liberty? Learn the truth by downloading our free e-book: Closing Argument: What Jefferson Really Meant by Separation of Church and State.