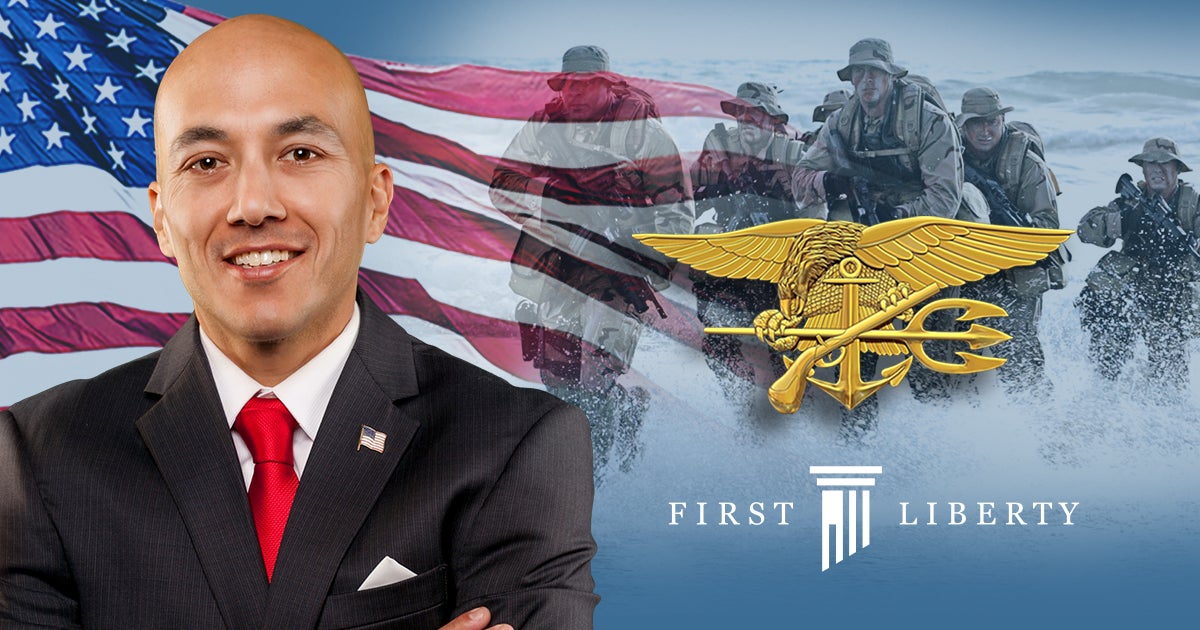 This week, we received positive news in our US Navy SEALs case.

The U.S. District Court for the Northern District of Texas expanded our Navy SEALs lawsuit, and preliminary injunction issued in January, to include every U.S. Navy service member who requested a religious accommodation from the vaccine mandate.

This decision stops the Department of Defense from punishing any Navy personnel who have religious objections to the mandate. It expands the lawsuit that initially protected dozens of Navy SEALs to now include protection for thousands of Navy personnel.

In his decision, U.S. District Court Judge Reed O’Connor criticized the unconstitutional actions of the Biden Administration, noting that, “[I]t is hard to imagine a more consistent display of discrimination.”

While we are thankful for this victory, the fight for the Navy SEALs is far from over. We still are in an intense battle for these SEALs and, indirectly, all who serve in our Navy.

Recall that last week the U.S. Supreme Court partially and temporarily granted the Biden administration’s request to consider vaccination status when planning deployments or assignments. This was a setback, but it wasn’t the end of the road for our clients.

It’s important to note the Supreme Court did not rule on the merits of the case itself or the most important aspect of the injunction. The injunction protecting our Navy SEALs remains in place, which means the Department of Defense still cannot punish or discharge them because of their religious beliefs as the case moves forward. And now, with the expansion of our class action lawsuit, that protection extends to other members of the Navy as well.

Additionally, not every justice on the Supreme Court agreed with the decision. Justices Clarence Thomas stated he would not have granted the government’s request. Justice Samuel Alito, joined by Justice Neil Gorsuch, wrote a dissent, stating:

“By rubberstamping the Government’s request for what it calls a ‘partial stay,’ the Court does a great injustice to the 35 respondents—Navy SEALs and others in the Naval Special Warfare community…These individuals appear to have been treated shabbily by the Navy, and the Court brushes all that aside.”

They also pointed out that the Navy did not give our clients the proper consideration required by law. The dissent echoed district court Judge Reed O’Connor’s order, which called the Navy’s review process “pure theatre” and pointed out the double standard against service members with religious objections:

“All the evidence available at this stage suggests that the Navy gave no real consideration to respondents’ requests…Here, the Navy treated service members who applied for medical exemptions more favorably than those who sought religious exemptions.”

Justice Alito and Gorsuch’s statement is significant because it clearly lays out the facts of the case and explains why the law is on the side of the SEALs. As the case moves forward, this dissent will be very favorable to have as part of our defense. 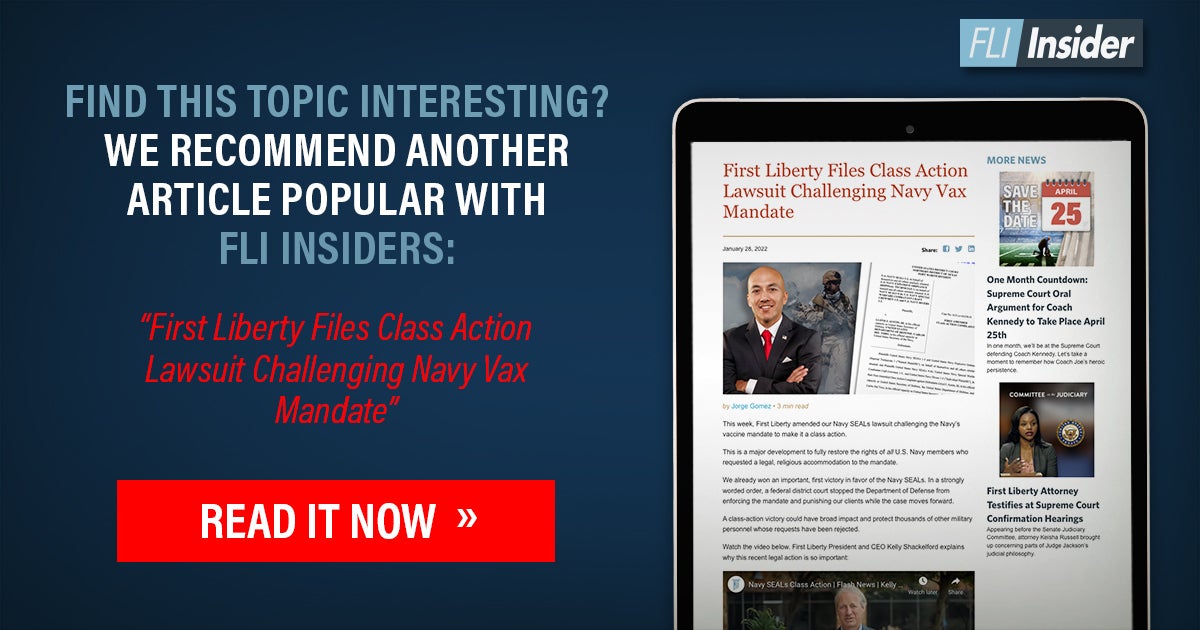 What happens next? The case will move forward in the federal courts to be considered on the merits.

There are many reasons to be hopeful for a victory that will fully restore the rights of our service members. Recall, we’ve already won on several, key aspects of this case. Both the district court and appeals court previously acted in our favor, affirming there is no military or pandemic exception to the Constitution and ordering government officials to stop their attacks against the Navy SEALs while their case is being considered.

Over the coming weeks First Liberty will be heading into major hearings and proceedings. These will be critical opportunities to argue that government officials must follow the law and not discriminate against service members due to their religious beliefs.

We have tough legal battles ahead, but we’re optimistic that, together, we can win them.

To help us secure a victory in the Navy SEALs case, a generous group of our supporters have come forward with a $500,000 CHALLENGE GRANT—the largest in First Liberty’s history.

I’m urging you to take advantage of this unique Challenge Grant—which MULITPLIES YOUR IMPACT in this critical fight.

Our brave heroes and their families are counting on our support. Please donate today and help us deliver a final victory for our Navy SEALs and thousands of service members. 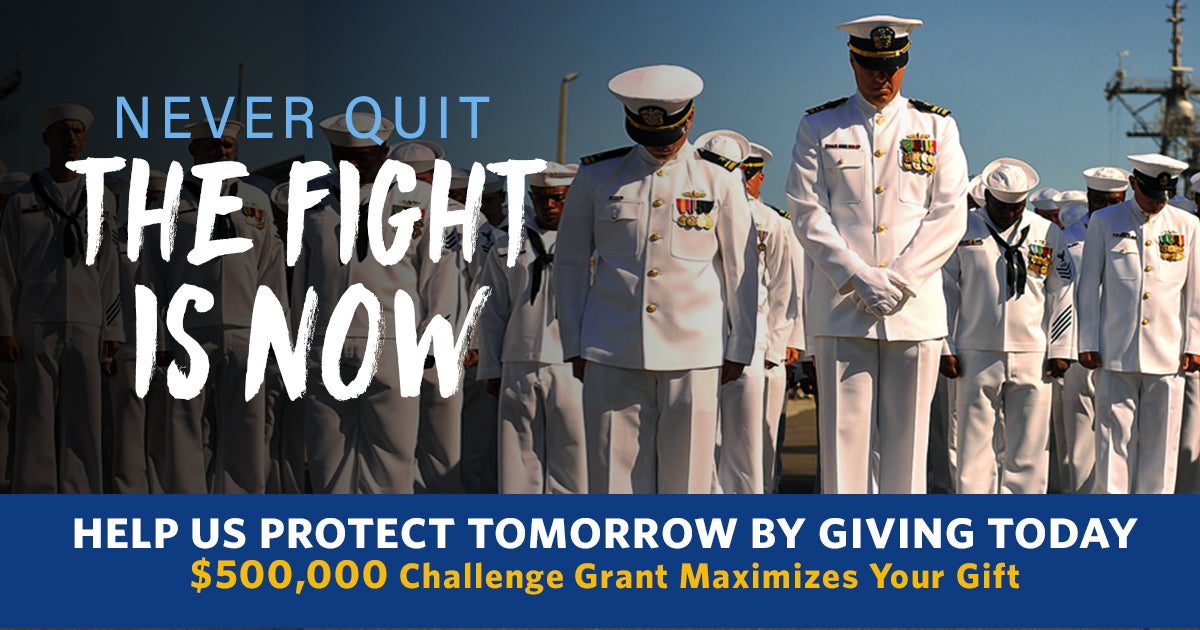