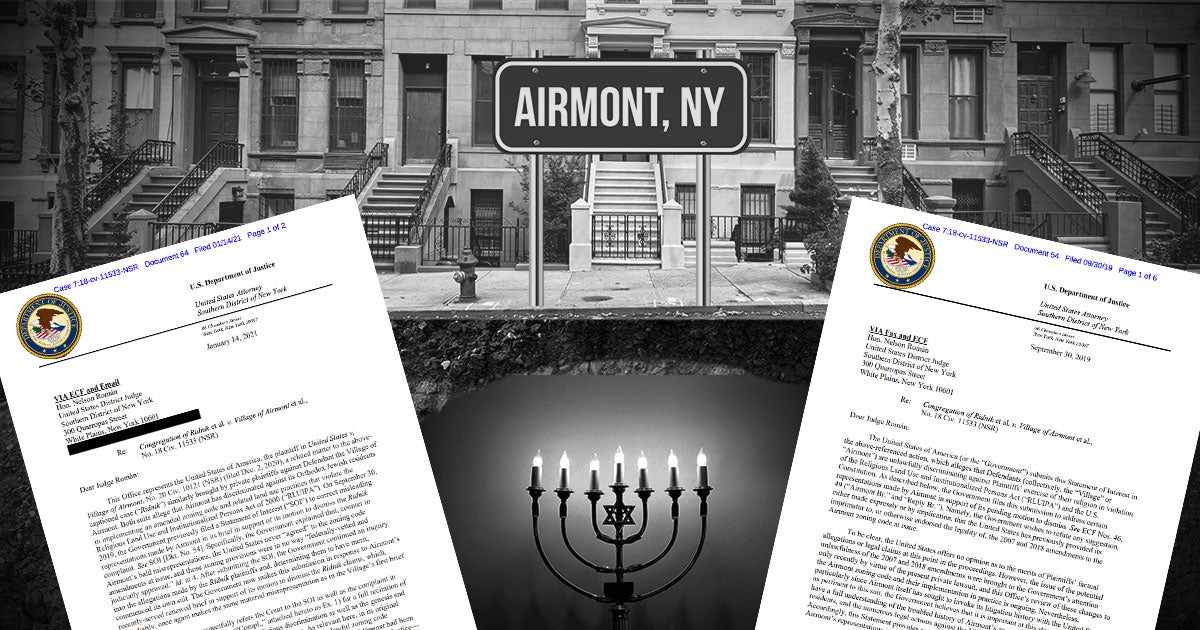 Recently, the U.S. Department of Justice (DOJ) filed a second statement of interest calling out religious discrimination against an Orthodox Jewish community in the Village of Airmont, NY.

Following a three-decades-long discriminatory pattern, the Village of Airmont continues to try and justify its hostility toward the Orthodox Jewish community—but in its latest statement, the DOJ made it clear that the village’s legal claims are “inaccurate and misleading.”

For over 30 years, the Orthodox Jewish community in the Village of Airmont has endured unconscionable discrimination from local officials, who have essentially forced its members underground.

Members of the community have to comply with outrageous demands requiring them to apply for government approval to worship in their own homes. Members are often subject to extended bureaucratic run-arounds, red tape to obtain permits and approvals, and even threats. One rabbi has paid over $40,000 in fees just trying to meet village demands. Another rabbi was threatened with jail. Why? Because he hosted a religious service in his home!

This longstanding pattern of bigotry has been under investigation for decades, and the DOJ actually began taking action in 1992, when then-U.S. Attorney William Barr filed a lawsuit against the Village of Airmont stating:

“[In] the Airmont case…The manipulation of zoning laws to keep Orthodox Jews out of a community strikes at the very heart of what this country stands for.”

More recently, in 2018, First Liberty, along with volunteer network attorneys at Norton Rose Fulbright, joined the legal effort to stop religious discrimination by filing a lawsuit against the Village of Airmont on behalf of the local Orthodox Jewish community. In addition to its latest Statement of Interest, the DOJ filed its first statement of interest in the case in 2019, and in December of 2020, DOJ filed its own lawsuit against the village.

All of the above actions and the DOJ’s latest statement in the Village of Airmont case filed in January 2021 show a federal commitment to stop religious freedom violations.

Consider the examples below, a small sample of many initiatives and actions by the DOJ in support for religious freedom in recent years:

Protecting the “Least of These”

The Constitution and America’s federal laws protecting religious liberty are meant to safeguard all Americans, regardless of their beliefs. But these laws are especially crucial for religious minorities—those we might consider the “least of these.” Sadly, religious minorities like the Orthodox Jewish community in Airmont often suffer the worst discrimination at the hands of abusive government officials.

So, why is it so important to defend minority faith communities?

Think about this. If government officials can target Orthodox Jewish residents in New York for a religious meeting in their home, can’t they come after you for a Bible study in your home or a friend’s home?

Discrimination against any religious group has absolutely no place in the United States. And regardless of who heads the DOJ in the coming years, First Liberty will remain steadfast in our commitment to defend the Orthodox Jewish community in the Village of Airmont—because no American and no religious minority should be forced to live out their faith in hiding.