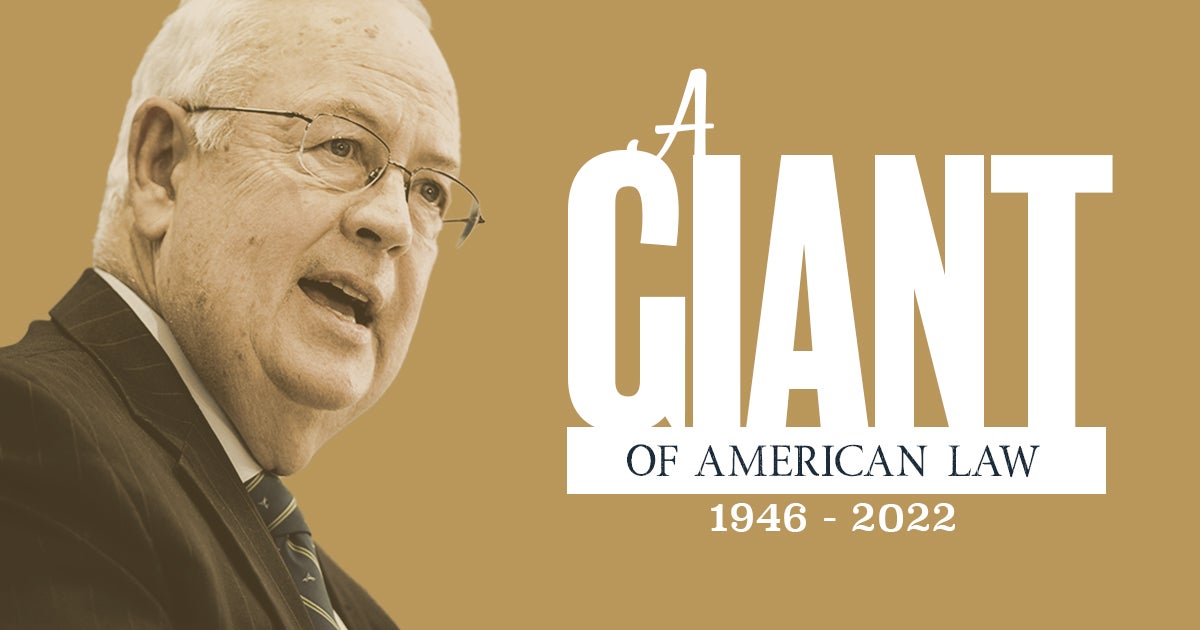 This week, America lost a patriot and First Liberty lost a dear friend. We remember and honor Kenneth W. Starr, who passed away on September 13 at Baylor St. Luke’s Medical Center in Houston. Ken was a powerful voice for faith and freedom. We commemorate him for a distinguished career in academia, the law and public service.

“Ken Starr was one of a kind: a prosecutor, federal appeals judge, the Solicitor General of the United States, the President of Baylor and a great friend to First Liberty. He was brilliant, kind, wise, of the upmost integrity, a strong Christian man, and my friend. I will miss him much, although I have no doubt where he is and that I will see him again.”

Ken was an avid defender of religious liberty. He participated in oral argument for First Liberty in Morgan v. Swanson, more commonly known as the “candy cane” case. It involved three elementary school students who were prohibited from handing out Christmas gifts with religious messages at school. School officials, shockingly, argued that the students did not have any constitutional rights to free speech or religion. In a landmark decision, the Fifth Circuit Court of Appeals found that elementary students do have First Amendment rights (contrary to the school officials’ arguments), and therefore, cannot be subjected to religious discrimination.

The following statement* was issued by Ken’s family. It recounts his incredible and extensive life’s work and the far-reaching impact he made in the lives of the people around him.

A Reagan judicial appointee and Solicitor General under George H.W. Bush, Ken Starr also served as Independent Counsel, President and Chancellor of Baylor University and Dean of the Pepperdine School of Law. Starr had a distinguished career in academia, the law and public service. After leaving Baylor, Starr was Of Counsel to The Lanier Law Firm, where he continued to practice appellate law. He also taught courses in constitutional law, negotiation and religious liberty plus authored several books and served as a commentator for Fox News.

Starr argued 36 cases before the U.S. Supreme Court, including 25 during his service as U.S. Solicitor General from 1989 to 1993. He served as United States Circuit Judge for the District of Columbia Circuit from 1983 to 1989, as Counselor and Chief of Staff to U.S. Attorney General William French Smith from 1981 to 1983, and as a law clerk to both Chief Justice Warren E. Burger (1975-1977) and to Fifth Circuit Judge David W. Dyer (1973-1974). He was appointed by a three-judge panel to serve as Independent Counsel for five investigations, including Whitewater, from 1994 to 1999.

For 25 years, Starr taught constitutional law as an adjunct or visiting professor at New York University, George Mason School of Law, Pepperdine School of Law, Chapman Law School and as the Louise L. Morrison Professor at The Baylor Law School. More recently, Starr taught courses at Regent Law School and Hillsdale College. Starr was a partner at two national law firms: Kirkland & Ellis and Gibson, Dunn & Crutcher, specializing in appellate law. He joined The Lanier Law Firm in 2017 as Of Counsel. Mark Lanier said of Ken, “Over four decades I have known Ken as “Judge Starr,” “Dean Starr,” “President Starr,” “Uncle Ken,” but most importantly “dear friend,” to me, my family, our firm, our clients, American justice, and world justice. The world has lost a super Starr, and the world is rightly in mourning.”

He served as the Duane and Kelly Roberts Dean of the Pepperdine School of Law from 2004 to 2010 and as President and Chancellor of Baylor University from 2010 to 1016. According to the current president of Pepperdine, Jim Gash, “Starr’s vision for Pepperdine was global…I am profoundly grateful for Ken’s friendship, mentorship, counseling, guidance and encouragement.” Starr also held leadership roles on many non-profit boards, including Advocates International, Christian Legal Society and the Alliance Defending Freedom Advisory Board. Throughout his professional career, he championed the cause of religious liberty and freedom of conscience for all persons.

Kenneth Winston Starr was born July 21, 1946, to William D. Starr and Vannie Trimble Starr. He grew up in San Antonio where his father was a barber and minister. After graduating from San Antonio’s Sam Houston High School, he earned his B.A. from George Washington University (while working part-time on Capitol Hill for Congressman Bob Price). He earned a Master of Arts in Political Science from Brown University and his Juris Doctor degree from Duke University Law School where he was Order of the Coif and served as Note and Comment Editor on the Duke Law Journal. He and Alice Jean Mendell of Mamaroneck, New York were married on August 23, 1970, one week before he began law school. He was admitted to practice law in Texas, California, the District of Columbia, Virginia, and the United States Supreme Court.

Starr was author of many articles and several highly acclaimed books: Religious Liberty in Crisis: Exercising Your Faith in an Age of Uncertainty was described by best-selling author Os Guinness as “seasoned, wise, magisterial, and gracefully written — a comprehensive judge’s tour of the religious freedom horizon;”  First Among Equals: The Supreme Court in American Life, was praised by U.S. Circuit Judge David B. Sentelle as “eminently readable and informative…not just the best treatment to-date of the Court after Chief Justice Earl Warren, it is likely to have that distinction for a long, long time;”  Bear Country: The Baylor Story and Contempt: A Memoir of the Clinton Investigation (a New York Times best seller in 2018).

He received numerous honors and awards, including the Edmund Randolph Award for Outstanding Service in the Department of Justice, the Attorney General’s Award for Distinguished Service, the J. Reuben Clark Law Society 2005 Distinguished Service Award, the 2004 Capital Book Award, and the Jefferson Cup award from the FBI. He received honorary doctoral degrees from American University, Hampton Sydney College, Shenandoah University, and Pepperdine University.

Starr is survived by his beloved wife Alice Mendell Starr, to whom he was married for 52 years. They lived in Northern Virginia, California and most recently Waco, Texas. In addition, he is survived by his three children…plus nine precious grandchildren.

Starr will be buried at the Texas State Cemetery in Austin. Visitation will be held at Wilkirson Hatch Bailey in Waco on Friday, September 23 from 4:00 – 7:00 pm. A memorial service for family only will be held at Antioch Community Church in Waco on Saturday, September 24 at 3:00 pm. Jimmy Seibert, senior pastor of Antioch, said of Ken’s life, “The world will remember Ken Starr as a brilliant thinker, leader, and defender of truth and justice. I will remember Ken Starr as a devoted personal friend and a man of sincere and deep faith. Thank you, Ken, for your love of God, your love of family and your love for all of us. You will always be remembered in American history, but you will be specifically remembered in our hearts.”

Thank you, Ken, for your dedication, your passion and for the many decades of selfless service to our country. At First Liberty Institute, you will always be cherished and remembered.

*Sections of this statement have been edited for length.