3 Things: Key Insights that Open Up Path To Victory on Coach Kennedy Case 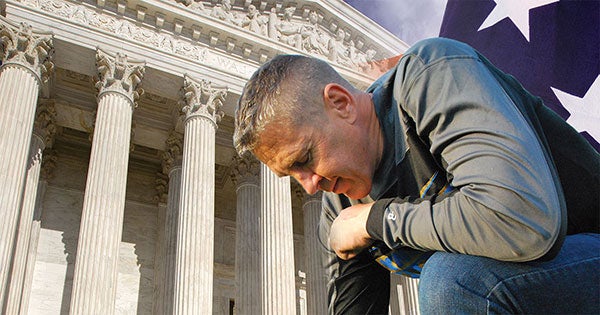 Last week, the U.S. Supreme Court announced that, for now, it will not be reviewing Coach Kennedy’s case.

But their decision came with a catch, so to speak.

In their concurring statement, calling the 9th Circuit’s opinion “troubling,” four Justices of the Supreme Court – Alito, Thomas, Gorsuch, and Kavanaugh – gave a very clear indication of what might win Coach Kennedy’s case.

1. If students’ eyes can see, you have no right to pray.

For many of you, Coach Kennedy being fired for kneeling in silent, private prayer was a bad call to begin with. And the Justices seem to agree.

In their concurrent statement, they expressed great concern about the overreach of the Ninth Circuit Court of Appeals, which upheld Coach Kennedy’s firing.

In particular, they were troubled because the appellate court’s decision “appears to regard teachers and coaches as being on duty at all times from the moment they report to work to the moment they depart, provided that they are within the eyesight of students.”

In other words – if the Ninth Circuit’s ruling were upheld – coaches and teachers could never fold their hands or bow their heads in prayer if there was even a possibility that a student could see them doing so.

And under that kind of interpretation of religious freedom, a teacher or coach saying “God bless you” after a student sneezes might be slapped with a lawsuit, or even be fired from their job, as was the case with Coach Kennedy.

2. Teachers or coaches? They’re never really off the clock.

Even more disturbing, the Ninth Circuit’s opinion could lead to teachers and coaches not being able to live out their faith outside of the workday.

The key question then, is: “When are coaches off the clock?” During the course of their day, when are they free to engage in private activities, like silently praying over their lunch?

In its opinion, the Ninth Circuit justified Coach Kennedy’s firing based on the fact that he dared to pray in front of students even after the game was over.

Clearly, this has some serious implications for you and your religious liberty – especially if you’re a public employee.

Simply put, it means that if you’re a coach or a teacher, then you cannot engage in any outward or visible expression of your religious faith – because you’re always on the clock.

3. To all the role models, please…just put your faith aside.

Lastly, consider the Ninth Circuit’s emphasis that Coach Kennedy was “hired to communicate a positive message through the example set by his own conduct.”

Or to put it another way, he was to serve as a good role model as part of his job.

But when you read through the opinion more closely – and when you take into account the Ninth Circuit’s criticism of Coach Kennedy living out his faith – it makes it seem as though coaches can only be a good role model if they refrain from any kind of visible expression of their religious beliefs.

As a person of faith, put yourself in that scenario for a moment.

Imagine if you had to sideline – or completely hide – your faith any time you engage with a student – or even be SEEN by a student doing any type of activity that they could interpret as being religious.

Take it a step further. What if a student saw Coach Kennedy saying grace with this family out at a public restaurant? Are they free to throw the flag then? Or is Coach Kennedy free to live out his faith?

So, what’s next for Coach Kennedy?

His case will now head back to the trial court — where we eagerly await the opportunity to clarify the issues the Supreme Court wants answered – and this time, we have a possible road map to WIN the case, given to us by the Justices.

In other words, the game clock has been reset for Coach Kennedy and the goal line to victory is clearly in sight for every coach across America – and the rights of every American.

So we’re asking for your support! Together, we can ensure that we take Coach Kennedy’s case back to the Supreme Court for a final victory.

YES, I WILL GIVE AND KEEP FIGHTING FOR
COACH KENNEDY’S RELIGIOUS FREEDOM!