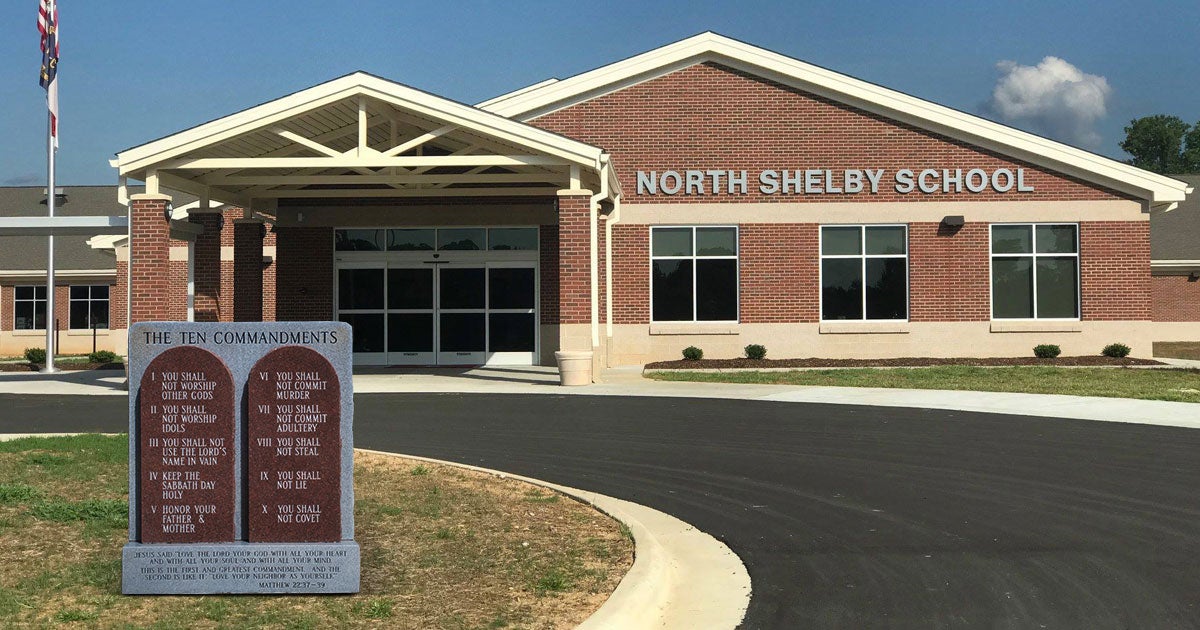 The Freedom From Religion Foundation (FFRF) recently sent a letter threatening a North Carolina school board with potential legal action for considering a Ten Commandments display.

Last month, the Cleveland County School Board discussed placing Ten Commandment displays near the entrances of all its school buildings. Under North Carolina law, school displays may include religious documents of historical importance, as long as the displays are not built for the purpose of establishing a religion or persuading viewers to embrace a particular faith.

First Liberty immediately followed up with our own letter, reassuring Cleveland County School Board that Ten Commandments displays are perfectly legal under not only North Carolina law, but also the U.S. Constitution, and U.S. Supreme Court precedent.

“North Carolina law recognizes that The Ten Commandments, like the Magna Carta and Mayflower Compact, have much to instruct students about the development of the rule of law in this country,” said Jeremy Dys, First Liberty Institute Special Counsel for Litigation and Communications.

As is common with the FFRF, they were quick to complain, but wrongly asserted that Cleveland County School Board’s consideration of the Ten Commandments display would violate the First Amendment.

In our letter to the County School Board, First Liberty attorneys noted the opposite is actually true: Rejecting a Ten Commandments display because of its religious content could be considered “overt hostility toward religion,” which is in fact unconstitutional.

“Rather than dismiss these historic documents from public view, cancelling them due only to their religious content,” the letter states, “the Board should remain committed to the principles of religious pluralism and freedom made possible by the very documents now under consideration.”

The board has yet to make a final decision regarding the displays, and First Liberty is ready to defend the original intent of the First Amendment if the FFRF continues its harassment.

This is hardly the first time displays containing religious content have come under attack. Usually, when organizations like the FFRF, ACLU, or the American Humanist Association oppose the use of religious imagery or faith-based symbols on public property, they’re misunderstanding years of constitutional law and court precedent, as well as ignoring our nation’s rich religious heritage and history.

Thankfully, First Liberty has a winning track record in this area.

In 2019, First Liberty achieved a historic victory at the U.S. Supreme Court in American Legion v. American Humanist Association defending the Bladensburg Peace Cross. The memorial was built to honor 49 heroes from Prince Georges County, Maryland who died fighting in World War I. Because it is shaped like a cross, it came under multiple legal challenges. In 2019 the Supreme Court ruled that such displays are not just legal, but should be seen as “presumptively constitutional.”

For instance, First Liberty is currently defending another Ten Commandments display at the Arkansas State Capitol. Ever since the display was built in 2017, legal organizations including the ACLU have pressured Arkansas to remove the display, and our legal team has responded by arguing that the display is consistent with the American Legion decision because it is displayed as a historical symbol.

Similarly, another Supreme Court case (Van Orden v. Perry, 2005) determined that a Ten Commandments monument on the Texas State Capitol lawn (after which the Arkansas display was modeled) is constitutional. In that case, the Court held that displaying the Ten Commandments represents the foundations of our country’s legal system—not a government endorsement of religion.

Ten Commandments displays (like the one being considering in Cleveland County, NC) and other historical religious symbols are a visible reminder of the moral foundation of law, the values and principles that we share, and of the rich heritage of faith in our nation. Thankfully, because of the American Legion decision, whenever these public displays come under attack, First Liberty is able to respond and affirm that they perfectly legal under the Constitution.