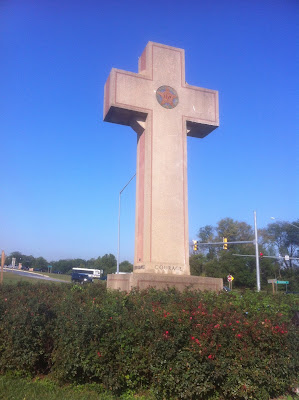 In the latest move to protect the historic WWI Veterans Memorial in Bladensburg, Maryland, Liberty Institute filed a reply brief on behalf of our client, The American Legion, with the United States District Court for the District of Maryland on Monday. While the American Humanist Association demands its alteration or removal, Liberty Institute remains energetically committed to defending the memorial and the memory of the fallen honored there.

Built by the American Legion and completed in 1925, the Veterans Memorial, which is in the shape of a cross – an iconic symbol for the fallen of WWI and the primary grave marker in U.S. cemeteries overseas in which many fallen of WWI are buried – serves to honor the 49 men from Prince George’s County, Maryland who died in WWI. The initial funds for the memorial were partly raised by mothers of sons who didn’t return home.

Surrounding the WWI memorial are other memorials and monuments dedicated to the veterans of the War of 1812, WWII, the Korean War and Vietnam War, and the victims of 9/11. To read more about the memorial’s history and description, click here.

Despite the fact the memorial stood uncontested in Bladensburg, MD for nearly 90 years, the American Humanist Association last year sued for its removal.

The battle began in February of 2014, when the American Humanist Association and some of its members accused the memorial of being unconstitutional because of its cross shape. They alleged that the public ownership, maintenance, and display of the memorial violated the Establishment Clause of the First Amendment to the U.S. Constitution.

Liberty Institute, on behalf of The American Legion, jumped to the defense of the memorial in April 2014, filing a motionto allow the Legion to intervene in the lawsuit and defend the memorial due to the Legion’s property interest in the memorial, its history of honoring those who have died in war and its role in constructing the memorial. The motion was granted in September 2014.

But the battle is still raging.

DEFENDING THE RIGHT TO REMEMBER THE FALLEN

Because similar attacks have exploded across the nation in recent years, Liberty Institute is well seasoned in the defense of veterans memorials like these. For instance:

·      In July of 2015, Liberty Institute and the Mt. Soledad Memorial Association celebrated the transfer of the Mt. Soledad Veterans Memorial in San Diego, Ca. to the Association, hopefully putting an end to attacks on this historic veterans memorial. Read the story here.

In both of these cases, the American Civil Liberties Union (ACLU), an organization with a secularist worldview that is generally hostile to public displays that include religious imagery or text, sued for the removal of a military monument containing religious imagery – specifically, a memorial in the shape of or including a cross. And in each case – like in the current battle to defend the Bladensburg Memorial – Liberty Institute argued that such veterans memorials in no way violate the Establishment Clause.

“When organizations like the ACLU and the American Humanist Association attack veterans memorials such as these, they are ignoring the rich heritage and meaning behind the memorials,” says Jeff Mateer, General Counsel for Liberty Institute. “Their accusations that these veterans memorials are unconstitutional are both incorrect and dishonor those who served.”

Does religious imagery or text on public property mean an unlawful government endorsement of religion? The Supreme Court has said no.  The Court ruled in recent years that in the proper context, both public prayer (to open a city council meeting, for example) and public displays of the Ten Commandments are constitutional. If elected officials can pray before public proceedings, and if the Ten Commandments can be displayed outside state capitols, why can’t a memorial honoring our veterans exist in the shape of a cross? The answer is, it can.

Indeed, Liberty Institute attorneys point out that any assertion that these memorials violate the Establishment Clause completely ignores the history and context of military memorials all over the world. Throughout our nation’s history, religious imagery, including crosses, Stars of David, and biblical references have been used to honor fallen servicemen and women. These veterans memorials commemorate the heroism and sacrifices of those they honor.

Honoring the memory of our fallen heroes through symbols like crosses has been a tradition of our country for many generations.  To tear these memorials down would be to violate Americans’ right to remember the fallen.

“But a Latin cross is not merely a reaffirmation of Christian beliefs. It is a symbol often used to honor and respect those whose heroic acts, noble contributions, and patient striving help secure an honored place in history for this Nation and its people. Here, one Latin cross in the desert evokes far more than religion. It evokes thousands of small crosses in foreign fields marking the graves of Americans who fell in battles, battles whose tragedies are compounded if the fallen are forgotten.”

Once again, America risks “tragedies . . . compounded” by forgetting the fallen through tearing down a memorial in the shape of a cross.

The decision handed down in the case of the Bladensburg Cross will hold huge implications for monuments all around the country. What about the Cross of Sacrifice and the Argonne Cross at Arlington National Cemetery, both WWI memorials located mere miles from Bladensburg?  What about the Tomb of the Unknown Soldier, on which is inscribed: “Here rests in honored glory an American soldier known but to God”?

What about the hundreds more veterans memorials around America containing crosses, stars, or religious text?

If the Bladensburg Cross isn’t safe from destruction, none of these are safe.

Will America really dishonor the memory of so many veterans because of unfounded accusations that these memorials violate the Constitution?  That is not the law and never has been.

It is imperative that we work together to defend the military memorials all over our country.They represent the millions of men and women who have sacrificed everything for our freedom. Are we willing to fight for their memory – and the right to honor their memory – through the preservation of historic monuments?