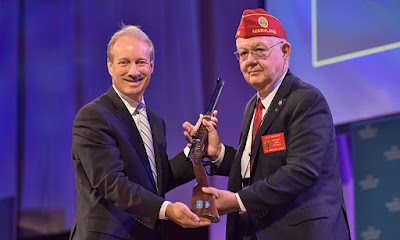 As the battle for religious liberty gains new intensity, Liberty Institute is recognizing the heroes of this struggle in a new way. On Wednesday, September 2, Liberty Institute President and CEO Kelly Shackelford presented the very first Philip B.  Onderdonk Jr. Religious Liberty Award at the 2015 American Legion National Convention in Baltimore, the veterans group’s 97th annual convention. Named after its first recipient, the award is an annual recognition of one individual whose dedication to defending religious freedom has had widespread impact.

“Religious Freedom is our First Freedom,” Kelly Shackelford says. “It must be defended and those who defend it should be recognized.”

Philip Onderdonk is the National Judge Advocate of The American Legion, a position he was appointed to in 1983. He wields an impressive résumé, having graduated with honors and a degree in law from John Hopkins University in 1965. He is a member of multiple bar associations, including the Washington, D.C. Bar Association, and has been admitted to practice before the U.S. Supreme Court. He is also a decorated veteran of the Vietnam War.

His résumé as an advocate for religious liberty is equally stellar. Onderdonk and The American Legion have worked extensively alongside Liberty Institute in the most high-profile veterans memorial lawsuits, helping to defend the Mt. Soledad Veterans Memorial in San Diego, the Mojave Desert Veterans Memorial in California, and the Bladensburg WWI Veterans Memorial in Maryland. Read more about these cases below.

Onderdonk and The American Legion were also instrumental in  working with Liberty Institute to defend the Pledge of Allegiance in public schools when it was attacked in court by a national humanist group.

“For over 10 years, Phil has worked alongside Liberty Institute on behalf of The American Legion to stand against attempts to tear down veterans memorials and also stand against the attacks on the Pledge of Allegiance being recited publicly,” Kelly Shackelford stated. “Because of his relentless advocacy, we have chosen to name the award in his honor.”

“There’s nothing more American than a Henry—the rifle that won the west,”  said Roger Byron, Senior Counsel at Liberty Institute and a veteran, who attended the award ceremony as well. “We are indebted to Henry Repeating Arms for their generosity and support of this award.”

Liberty Institute and The American Legion have worked side-by-side for years to defend our nation’s veterans memorials and other expressions of patriotism and gratitude to our nation’s military veterans. The American Legion’s commitment to veterans and Liberty Institute’s promise to defend veterans’ religious rights and memorials with religious imagery combine to create a strong partnership that honors the sacrifices of millions of men and women.

In recent years, Liberty Institute and The American Legion have worked together to save several veterans memorials:

• In July of 2015, Liberty Institute and the Mt. Soledad Memorial Association celebrated the transfer of the Mt. Soledad Veterans Memorial in San Diego, Ca. to the Association, hopefully putting an end to attacks on this historic veterans memorial. Read the story here.

• In August of 2015, Liberty Institute completed the first stage of legal briefing in the ongoing case to defend the historic Bladensburg WWI Veterans Memorial in Bladensburg, Maryland—which is currently under attack and threatened with removal because of its cross shape. Read about the case here.

Kelly Shackelford said that working with The American Legion on cases to defend veterans rights and veterans memorials is an honor and a privilege Liberty Institute is dedicated to defending the religious rights of our veterans and all Americans. The American Legion is dedicated to defending the men and women who fought so that those rights would exist. Joining forces for a cause as sacred as defending our nation’s veterans memorials makes for an outstanding partnership.

THE POWER OF PASSION—PARTNERING WITH PEOPLE DEVOTED TO FREEDOM

The imperative work of defending religious liberty in America is not something that any one of us can do alone. It takes organizations like The American Legion. It takes brave individuals like Phil Onderdonk. And it takes everyday citizens like you.

As we announce the inauguration of the annual Philip B. Onderdonk Jr. Religious Liberty Award, we also want to extend our gratitude to our friends, our supporters, and those who work with us to spread the word about the ongoing battle for religious freedom in America. We could not do this alone.