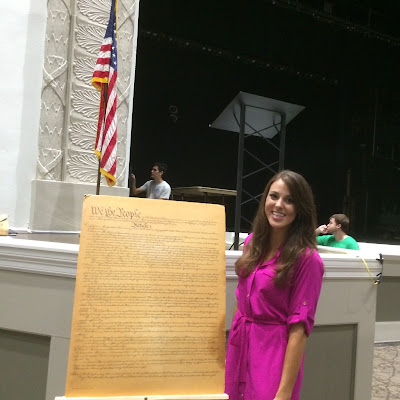 What will America look like now that the U.S. Supreme Court, by a 5-4 vote, has imposed same-sex marriage on the entire country? Specifically, what will it look like for same-sex couples and those who hold sincere faith-based disagreement with same-sex marriage?

That was the topic of a Constitution Day debate on September 17 (the anniversary of the ratification of the U.S. Constitution) between attorneys for First Liberty Institute and the ACLU before an audience of over 700 students, faculty, dignitaries, and visitors at the nation’s 25th largest university, the University of North Texas (UNT).

And the audience—including my daughter and I (full disclosure: I work for First Liberty Institute)—was surprised, initially, that the “debate” didn’t seem to materialize since there were so many areas of agreement between the two sides. Indeed, the only early fireworks were provided by a man who began to heckle First Liberty Institute’s Chief of Staff and Counsel, Chelsey Youman before being escorted away with no one quite comprehending what he was saying.

But what did become clear, soon enough, was that deep disagreements do in fact exist just under the surface between the two sides.

First to speak was Rebecca Robertson, legal and policy director for the ACLU in Texas. Robertson outlined the events that led to the case of Obergefell v. Hodges making its way to the U.S. Supreme Court earlier this year and reviewed the reasoning by five of the nine Justices that discovered a new constitutionally-protected right for same-sex couples to legally marry. Robertson then turned to the impact of the decision for religious liberty.

Her answer: It should have little impact.

For several minutes, the ACLU lawyer sounded like she worked for First Liberty Institute. She affirmed that since the decision, traveling around Texas she had heard a chorus of concerns that religious liberty was greatly endangered by the Obergefell ruling. Yet she also asserted that that she considered herself a protector of both “marriage equality” and “religious liberty,” maintained that religious liberty had to be protected, would be protected, and that the Constitution was “big enough” to continue to protect religious freedom in a post-Obergefell world.

Robertson assured the audience that when it comes to religion, there is “nothing about Obergefell to change what you believe” about same-sex marriage if you are against it. Agreed. Of course, “belief” is not what the First Amendment guarantees, as First Liberty Institute’s Youman would soon remind the audience. The Constitution specifies free “exercise” of religion which includes the ability to act on those beliefs. Nevertheless, Robertson did go farther. She said churches could refuse to marry same-sex couples. Agreed. But again, Youman would soon remind the audience that that right to free exercise of religion goes beyond church walls. Yet Robertson went still farther, saying a religious citizen had the right to “speak publically against same-sex marriage” and even to openly “advocate” against same-sex marriage. Agreed and agreed. She later assured the audience that government should never force churches to marry same-sex couples and that lawsuits against churches trying to achieve such coercion should never happen.

But just when it appeared there was no clash of sexual vs. religious liberty First Liberty Institute’s Youman—formerly a successful private litigator—politely mounted the stage to unveil some inconvenient truths.

After warmly complimenting Robertson on her summation of the legal protections afforded religion in the Constitution and in federal law, Youman began to detail the obstacles anti-faith activists were using to block the road to the land of “coexistence” Robertson had said was just around the corner.

She mentioned the case of Dr. Eric Walsh, a First Liberty Institute client and one of America’s top health administrators. Dr. Walsh was fired after LGBT activists alerted his employer to sermons that he gave as a lay minister, supporting Biblical marriage. So much for the sanctity of churches or religious liberty!

Youman later pointed out the case of U.S. Navy Chaplain Wes Modder, who was relieved of duty for similar private statements affirming his religious beliefs on marriage and sexuality. Though Modder has won his case and been reinstated, his ordeal is evidence of the extreme hostility to religion of “marriage equality” advocates. Again, so much for sanctity of ordained denominational ministers.

Going further, Youman told the audience that First Liberty Institute had received “over 500 calls requesting legal help after the same-sex marriage decision this summer.” She didn’t stop there, but kept the flow of facts coming.

·      She mentioned existing threats to government contractors and sub-contractors based on their religious beliefs on marriage.

·      She mentioned the threat to the tax-exempt status of non-profits—and by implication, religious schools—voiced by none other than the U.S. Solicitor General during the Obergefell oral arguments at the Supreme Court.

·      She explained how religious schools are being intimidated with the loss of accreditation over their faith-based beliefs about marriage, and how students at faith-based schools could even lose government grants, loans, and financial aid.

I think that last one may have connected with some of the hundred of students listening. Should they, or their Christian or Jewish or Muslim classmates, lose their education because of their sincere religious beliefs on marriage?

Youman’s conclusion: “As easy as it would be to say that this tension” between the Obergefell decision and religious liberty “should not exist . . . frankly, the truth is that it does.In the same-sex marriage debate, many religious dissenters have been actively silenced, from the workplace to the pulpit to non-profits.”

I don’t know about the rest of the audience, but at that point I think Ms. Robertson’s ice-sculpture world of coexistence began to melt into the auditorium floor.

Where, after all, was the ACLU when these activists were aggressively going after religious dissenters to same-sex marriage? Not standing beside First Liberty Institute defending religious freedom, that’s for sure.

As the session wore on, I thought it was clear that the ACLU’s offer of coexistence had fine print in which dissenters would be signing away their constitutional freedoms.

When Youman emphasized that religious accommodations—a time-tested American legal remedy to carve out space for conscientious objectors—could be constructed to protect both same-sex couples and people of faith including county clerks and Christian wedding vendors (a clerk has been jailed and wedding vendors hurtled toward bankruptcy), Robertson paid lip service to accommodations but seemed to ultimately demure to this reasonable solution and said dissenting clerks should get used to facing jail time.

In Robertson’s world, it seems that loss of freedom or employment awaits dissenting government workers, and lawsuits and fines are the penalty for being a privately owned “public accommodation” (i.e. family business) such as a Christian wedding vendor who chooses not to participate in the promotion of an event that their faith considers to be sin.

When Youman offered managed diversity, Robertson preached dogmatic conformity where the government decides whether your religious belief is legitimate.

To Youman’s “million dollar question” of “When an irreconcilable conflict arises, should the government be able to force you to do what you sincerely believe is morally wrong?”, it seems that Robertson’s answer is, in many cases, yes.

Which made me think back to something Ms. Robertson said early in the debate. Referring to the “equal protection clause” of the Constitution’s 14th Amendment, Robertson affirmed the principle of equality, saying, “The government doesn’t get to pick favored people and give them special treatment; it doesn’t get to pick disfavored people and hold them up for poorer treatment than others.”

If the victims and potential victims cited by Youman had been in the audience and heard that come from the ACLU, I wonder if they would have chuckled or just rolled their eyes.

About First Liberty Institute
First Liberty Institute is a nonprofit legal group dedicated to defending and restoring religious liberty across America — in our schools, for our churches, in the military and throughout the public arena. Liberty’s vision is to reestablish religious liberty in accordance with the principles of our nation’s Founders. For information, visit www.firstliberty.org.