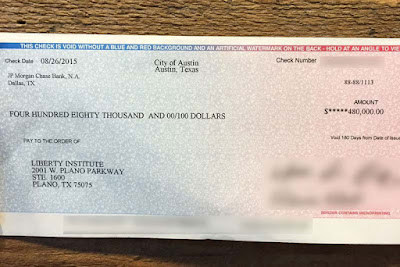 Bullies. That’s what Raul Gonzales called the City of Austin and pro-abortion activists who tried to cut off women from making an informed decision about whether to visit faith-based ministries offering prolife solutions to problem pregnancies.

Gonzales—a former Texas Supreme Court Justice and renowned private attorney was one of the volunteer attorneys for Liberty Institute in defending the prolife pregnancy centers.

Last year, a U.S. District Court ruled against Austin for passing a law targeting the pregnancy centers in an unfair manner. And this week, the City of Austin paid $480,000 in settlement of attorneys’ fees that should serve notice to any government entity contemplating similar action against faith-based ministries.

In 2012, Liberty Institute and  its volunteer attorneys, David Lill and Judge Raul Gonzales, now in private practice after serving on the Texas Supreme Court, challenged the constitutionality of the Austin ordinance that unfairly targeted Pregnancy Resource Centers. The law demanded the centers post false and misleading signs at their front entrances implying that the centers were unprofessional and dangerous. The City, contrary to standard medical requirements, ordered centers to retain full-time doctors even if the centers only provided a free over-the-counter pregnancy test.

Pro-abortion groups such as the National Abortion Rights Action League (NARAL) have implemented an aggressive strategy to establish these types of ordinances in cities across America. Their goal is to unfairly label and stigmatize the prolife centers, driving women away from them and into the arms of abortion clinics that profit from abortions.

Austin is the fourth local government in the United States to pass such ordinances, following Baltimore, Montgomery County and New York City, and Federal Courts blocked the enforcement of either part or all of each of these ordinances finding them to be violations of the First Amendment.

In June 2014, U.S. District Judge Lee Yeakel of the United States District Court for the Western District of Texas Austin Division issued a final judgment and permanent injunction ruling that the Austin city ordinance targeting religious life-affirming groups is unconstitutional. Finding that the ordinance was void for vagueness, the Court ruled that the City of Austin may not enforce its unconstitutional ordinances against the Diocese and other crisis pregnancy centers.

A PAINFUL WARNING TO DISCRIMINATORS

And now, the City of Austin must pay attorney fees of almost half-a-million dollars to Liberty Institute, its volunteer attorneys, and attorneys who represented a fourth pregnancy resource center in Austin. That will sting. And hopefully send a message.

Kelly Shackelford,President & CEO of Liberty Institute, said, “This is a huge victory. Just ask yourself: Can a city punish a faith-based ministry because it doesn’t like what it says? If a city could get away with this, what other kind of outreaches would they be able to restrict? The answer might be: any that they didn’t like, including religious ones. That’s not freedom. Thankfully, assertive legal action has restored justice and liberty for our clients and any ministry potentially at risk.”

This isn’t the first such attack. Liberty Institute has represented ministries and churches across the country that were targets of unlawful discriminatory regulations by local governments. This included an outreach to the homeless in Pennsylvania, a church plant in a town in Mississippi, and more. All have resulted in significant victories that have enabled faith-based outreaches to transform countless lives.

And that’s what religious liberty is all about: the freedom to bless others. Those who attempt to unlawfully hinder such ministries should consider the financial penalty Austin is paying before attacking such a basic American freedom.