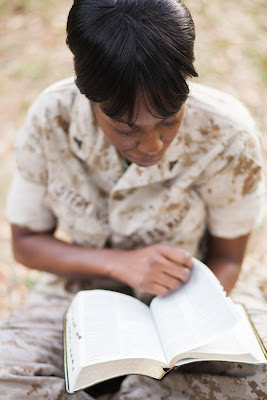 The Court of Appeals for the Armed Forces (CAAF)—the highest court in the military—announced last week that it will hear the case of Lance Corporal (LCpl) Monifa Sterling, a U.S. Marine and Liberty Institute client who was convicted at a court-martial in 2013 for refusing to remove a Bible verse she taped in her workspace.

“Our Marines give up many freedoms when serving, but religious freedom is never one of them,” said Mike Berry, Liberty Institute Director of Military Affairs. “Their right to free religious expression should be protected. We are grateful the Court took the case and we are hopeful for a favorable ruling for our client.”

Attorneys with Liberty Institute and volunteer attorney Paul Clement will represent Sterling in the case before the CAAF. Mr. Clement is a former U.S. Solicitor General and current partner at Bancroft PLLC. He has argued over 75 cases in the U.S. Supreme Court, including the Hobby Lobby case.

“We are pleased that the Court agreed to review this important case,” Clement said. “We hope they will uphold the rights of our service members to religious freedom.”

LCpl Sterling’s case began over two years ago when, stationed at Camp Lejeune, North Carolina, she noticed that other service members had placed various personal items in their workspaces. A devout Christian, Sterling decided to express herself as well, printing out the words of Isaiah 54:17: “No weapon formed against you shall prosper.” She posted these words in three different places around her personal workspace.

Before long, LCpl Sterling’s supervisor—who also happened to be her former drill instructor—ordered her to remove the Bible verse, using profanity to describe the verses in the process. When LCpl Sterling asked why, her supervisor said, “I don’t like the tone.” Sterling explained it was her First Amendment right to display the Bible verse and declined to take them down, also stating that no other person in the unit ever complained about the verse.

During her initial trial, Sterling invoked her First Amendment rights and the Religious Freedom Restoration Act (RFRA), only to have the judge reject those claims. Then, on appeal, Sterling again raised the First Amendment and RFRA. But the court of appeals ruled that displaying Bible verses did not constitute religious exercise as a “part of a religious system of belief.”

While Liberty Institute and volunteer attorney Paul Clement waited to see if the CAAF would take Sterling’s case, notable politicians and policy makers expressed their public support for Sterling.

In early June, Oklahoma Attorney General Scott Pruitt filed an amicus curiae (“friend of the court”) brief in support of LCpl Sterling, urging the CAAF to take her case. Attorneys General from four other states (Nevada, Arizona, South Carolina, and West Virginia) added their names to Pruitt’s brief, along with 43 members of Congress and the American Center for Law and Justice.

The amicus brief explained the signers’ concern about the violation of Sterling’s religious rights, and the harmful precedents that could potentially be established by the continued denial of her rights.

“[The Courts’] failure to recognize the breath of protection offered by RFRA and similar state statutes jeopardizes the religious protections intended by Congress,” the brief read. “Such precedent can have severe consequences to people of faith in the Marines, including those that are citizens of Oklahoma.”

Attorneys at Liberty Institute celebrated the brief as being “rare and unprecedented.”

“It is extremely important to have support from respected legal experts—like State Attorneys General—in cases like this one,” Berry said.

NOT SO RARE: RELIGIOUS DISCRIMINATION IN THE MILITARY

The violation of religious rights in the military is a real problem, according to experts at Liberty Institute.

“The government is clearly targeting religious freedom in the military,” Berry sad, adding that in recent years, Liberty Institute has defended service members from religious discrimination in all four branches of the military.

For instance, Liberty Institute defended Air Force Senior Master Sergeant (SMSgt) Phillip Monk, a Christian, after he was relieved of duties for his beliefs on marriage in 2013. Later, the Air Force cleared SMSgt Monk of any crimes and granted his request for retirement.

In September 2015, the Navy exonerated Liberty Institute client and 20-year chaplain Lt. Commander Wes Modder, who was relieved of duties in 2014 after sailors complained about Modder sharing his own biblical views in answer to their questions during private counseling sessions.

“We have protected military members and vindicated their religious rights under the law,” Berry continued. “Yet, we must continue to do so, so every person of faith in the military feels safe again, regardless of rank, age, color, gender, or branch of service.

The CAAF is anticipated to hear oral arguments in Sterling’s case in the spring of 2016.

Read more about LCpl Sterling’s case at sterlingfacts.com.
Read about the religious liberty rights of military members in our new, free, online Religious Liberty Protection Kit for the U.S. Military.