Which of These Four is the Most Outrageous Attack on Religious Freedom? 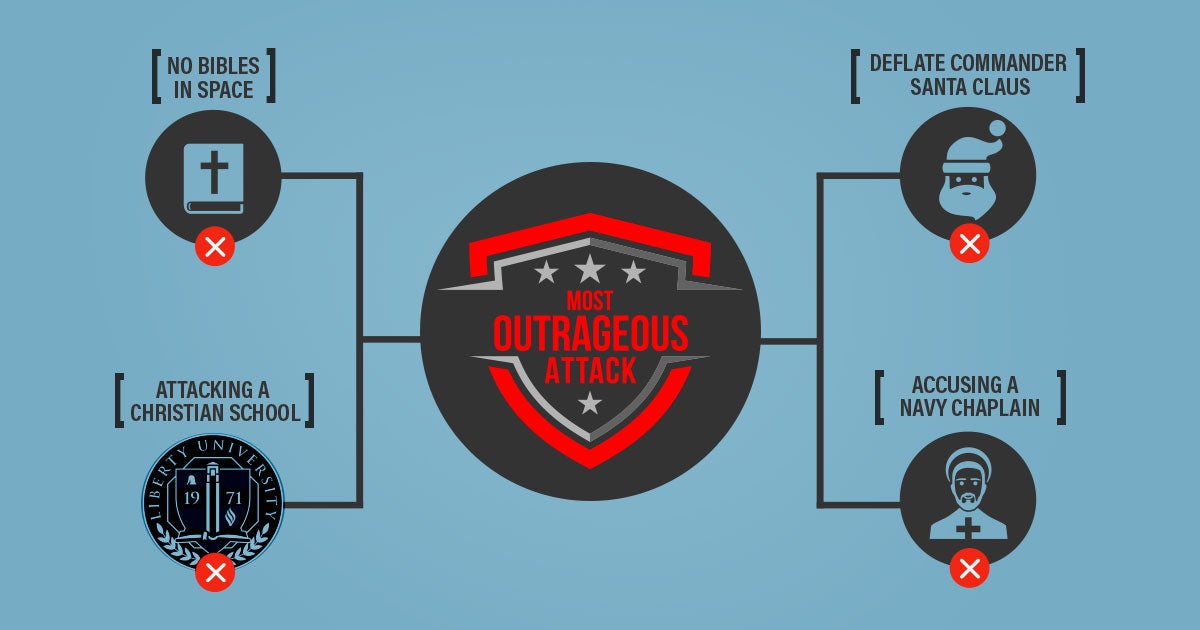 It’s no secret that there’s an All Out war on faith in America.

If we take a minute to survey the media headlines, it’s very likely we’ll find a daily example of activists who are relentlessly trying to scrub religious expression from the public eye and censor people of faith.

A majority of these attacks are shocking and should cause us great concern. Sometimes the intensity and ruthlessness of the hostility may even cause great alarm, because when the faith of one is attacked, the religious freedom of all Americans is at risk.

However, there are a select few times when attacks on people of faith are nothing short of outrageous…and the outright absurdity of certain violations is often caused by an unfounded or misguided understanding of the First Amendment and the Constitution.

In this special feature, we take a brief look at some of the most “maddening” assaults on religious freedom that the radical Military Religious Freedom Foundation (MRFF) has launched in recent months…and we’ll let you decide which one of these takes the title for being the most outrageous.

1. No Bibles in Space

MRFF’s activists cannot seem to satisfy their desire to erode military religious freedom here on Earth. Not long ago, they expressed distaste over the use of a Bible for the swearing-in ceremonies of commanders of the newly created Space Force, the sixth branch of the U.S. Military.

Though the use of Bibles for such ceremonies is a longstanding historical tradition, the group called it a “shocking and repulsive display of only the most vile, exclusivist, fundamentalist Christian supremacy.”

Just last year, only a few days before Christmas, the MRFF found a way to undermine military religious freedom and deflate the holiday cheer at the same time…in one of the most ridiculous ways you can imagine.

They complained about an inflatable Santa Claus on an Army base.

Yes, they made the ludicrous claim that a “Soldier Santa” on display in the commissary at Fort Belvoir in Fairfax County, VA was unconstitutional because it stood wearing military camouflage, a lapel reading “Christmas Force” and held a small sign with the phrase, “God Bless America.”

Apparently, they think a plastic figurine is an actual military officer who speaks for the government…someone with sufficient authority to force and impose his religion onto others.

In another similar holiday attack, the MRFF called out the Peterson Air Force Base in Colorado Springs, CO for selling Jesus-themed candy canes. They even went as far as to refer to this Air Force installation as being one filled with “wretched, fundamentalist Christian, religious extremist bigotry and prejudice.”

3. Dropping a Nuclear Weapon on the Constitution

Typical to the MRFF, they recently sent a threatening letter to the Defense Department because the Air Force held an appeals court hearing in the law school of Liberty University, a private faith-based college. The MRFF described Liberty as a “bastion of odious discrimination” because the school ascribes to a Christian worldview.

Perhaps most outrageous is the MRFF’s understanding of the Constitution. In their own words, they referred to hosting a government proceeding at the university as being synonymous with…“dropping a nuclear weapon on the Constitution.”

Their accusation is a ludicrous misreading of America’s founding document and the law. In fact, the U.S. Supreme Court has repeatedly held that the government cannot favor the secular over the religious, or vice-versa. A historically accurate interpretation of the Constitution—not the MRFF’s mythical version—means that religiously-affiliated law schools must be treated equally with secular law schools in order to satisfy the neutrality required by the First Amendment.

4. Christian Chaplain is “Voluntelling” Navy Sailors to Lead Like Jesus

The MRFF stirred up unnecessary trouble against Cmdr. Richard Smothers, chaplain of Naval Station Newport in Rhode Island, who was offering to teach a 12-week, optional seminar called “Lead Like Jesus.” An email was sent to base leaders, containing a flyer with information about the faith-based seminar.

Shockingly, the MRFF is demanding that the base’s commander, Ian Johnson, conduct a full investigation of Cmdr. Smothers and anyone else who promoted the event with flyers or emails. They argue that service members are being “voluntold” to attend a Christian event.

It’s absurd for chaplains to be attacked for sharing certain aspects of their faith—like a Christian chaplain giving a seminar about Jesus. It goes against their very job description.

A military chaplain’s primary function is to provide religious services and counseling, which inevitably means informing fellow service members of updates regarding faith-related seminars for which attendance is voluntary.

First Liberty Poll: Which Attack is The Most Outrageous?

The attacks above are only those of a single group of radical activists. They show us the extent that enemies of religious liberty are willing to go in order to scrub all religious expression from American life—and our brave military heroes aren’t immune to the opposition’s All Out war on faith.

Our loyal First Liberty supporters know how much our service members risk to maintain our freedoms. If you think these types of assaults are outrageous and dangerous, please take a moment to answer this quick, 10-second survey. Let us know which one of the above is the MRFF’s Most Maddening attack: