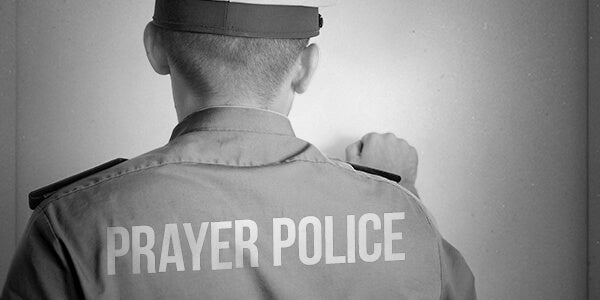 It’s a brand new year, and we’re all looking forward to a new slate of exciting opportunities. And if you’re a person of faith who’s been keeping up with First Liberty, you know that we’ve been encouraging you to go live out your religious beliefs.

That’s why you’ll especially want to keep an eye out on adverse groups who oppose religious expression, as they may be testing out new ways to squash your First Amendment rights – even to the point where they may find a way to intrude into the privacy of your very own home.

As shocking as that may sound, the unfortunate fact is that the “Prayer Police” may already be up to no good in your own neighborhood without you even knowing. They have become, in effect, the new Neighborhood Watch.

Are you still a bit skeptical? Let’s explore a new trend of attacks that our experts and legal team are seeing emerge more frequently – and what it all means for your religious freedom.

Protect religious freedom in your home!

We’ve known for a long time that adversarial groups and government officials are not shy about attacking religious freedom in public settings. Those types of attacks are all too familiar to many of us, whether it’s a coach or a teacher being fired for praying or sharing their faith, or humanist groups wanting to demolish war memorials with religious symbols, or school officials censoring students who wanted to express and live out their faith at graduation.

But our opponents who despise religious expression, appear to want to take things to a whole new level – because when you take heed of the incidents we’ve seen recently, you see a new pattern of attacks. Only this time, these violations are happening in the most sacred and protected space: your very own living room.

Many of you are probably wondering: What will this mean for my religious freedom?

To put it bluntly, you could be the target of the next attack simply because you want to host a small Bible study, or for having some people over to pray together, or maybe even for having too much space in your house devoted to religious purposes.

With that being said, we want to explain to you why you have to keep your guard up if you’re going to protect your religious freedom.

No Safe Space for Living Out Your Faith?

Recently, our attorneys uncovered one of the most jaw-dropping cases of religious discrimination that we’ve ever seen.

For over 30 years, village officials in Airmont, NY have forced the local Orthodox Jewish community underground. They’ve made it all but impossible for anyone who is an Orthodox Jewish believer to live out their faith, demanding that they receive approval from the city to worship in their very own homes.

Even worse, these village bureaucrats will put you – and any person of faith – through a grueling process simply to get a permit to have a Bible study or a small prayer group in any room of your house. And there’s no guarantee that you’ll ever be able to satisfy their demands or that you’ll get the permit you need to worship (as if the U.S. Constitution and the First Amendment weren’t enough of a permit).

If you still don’t think that’s an invasion of your most fundamental rights, think about a village or city inspector being sent to your front door with a tape measure to see how much space you use in your house to shelve Bibles or any other religious book. That’s the sort of thing they’re doing to the religious community in Airmont.

And to be honest with you, what’s happening in Airmont, NY isn’t just a one-off incident.

Right now, we’re fighting two cases where senior residents were prevented from hosting a Bible study in the senior living communities where they live.

In Virginia, retired minister Ken Hauge and his wife Liv, for example, were even threatened with eviction after they tried to have a Bible study in their own apartment. And in Florida, Donna Dunbar was outright banned from hosting any kind of religious group in her apartment’s social room.

Of course, let’s not forget that less than a year ago, First Liberty had to fight at the U.S. Supreme Court for Mary Anne Sause, a retired Catholic nurse who was ordered by two police officers to stop praying in her own home.

So when you step back and see a broader view, you’re left asking a very important question: If Americans can’t live out their faith in their own homes, then is there really any “safe space” left for them do so?

That’s the extent of what we’re dealing with, this emerging pattern of attacks – and it’s why our attorneys are fighting arduously so that you and every American can live in accord with your beliefs without fear of being censored, punished, fined, or forced to hide.

Practicing Faith Without Fear.
No person of faith should be forced underground.