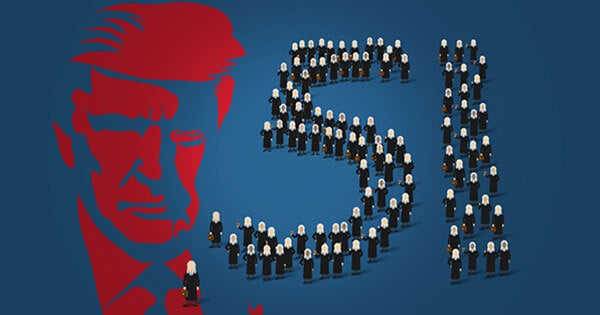 Judicially speaking, President Trump has come out of the gates fast in 2019, picking right up where he left off in 2018.

And millions of Americans – especially people of faith like you – are paying very close attention to the political whirlwinds that are sweeping through Washington, D.C. at the moment.

But though many choose to criticize and banter about what government isn’t getting done and all of the swamp-like stalemate, we thought it worthwhile to shift the focus of the conversation to an area where progress is actually being made.

So here’s our exclusive take of what you are likely not hearing too much about in the mainstream media – that President Trump continues to make the nomination of excellent judges one of his top priorities.

Another record wave of nominees? It very well could be.

Last week, President Trump and the White House re-nominated 51 federal judicial nominees that had been stalled by the previous Congress.

And the reintroduction of these nominees comes at a critical time, especially when you consider what the numbers show. Right now, in fact, we’re looking at close to 150 empty judges’ chairs across our federal judiciary!

So when you do the math, this “wave” of judicial nominations would essentially take care of about one-third of all current vacancies.

And that would indeed be another record-setting achievement for the President on the nomination front. That is, assuming of course, that Senate Republicans can help spearhead the effort to vet, confirm, and vote on all of those nominees in a timely fashion.

But it’s no surprise that the President’s opponents are already putting roadblocks in the confirmation path of these excellent nominees – much like they have done in the past.

To a point, you would expect disagreement on a nominee’s judicial philosophy or the logic behind their rulings – but the opposition to President Trump’s appointees hasn’t always come in the form of critiques about legal doctrine.

Instead, the President’s judicial picks have often faced attacks because of their religious beliefs.

Who Didn’t Get the Memo About Religious Tests?

Of deep concern to you and many people of faith is that more frequently we’re seeing nominees criticized and hounded during confirmation hearings because of their religious beliefs.

Here’s the most recent example.

Last December, Sen. Kamala Harris and Sen. Mazie Hirono took issue with Brian Buescher – nominated to fill a district court seat in Nebraska – and his membership in the Knights of Columbus, a Catholic service organization.

But, of course, we’ve seen this sort of thing happen in the past.

How can we forget the time Sen. Diane Feinstein specifically chastised then-nominee Amy Coney Barrett – now a judge in the 7th Circuit Court of Appeals – regarding her faith, stating: “The dogma lives loudly within you and that’s a concern.”

And, though not a judicial nominee, current Acting Director of the Office of Management and Budget, Russell Vought – also appointed by President Trump –had to endure a heated exchange with Senator Bernie Sanders about his religious beliefs and his affiliation to a Christian college.

Indeed, these incidents, at the least, beg the question of whether or not certain members of the Senate Judiciary Committee – and government in general – are aware that putting nominees through a “religious test” for office is unconstitutional.

But it’s always better to end on a positive note.

In this Congressional term, the Senate Judiciary Committee is now under new leadership – and that could very well be the pivotal factor that Senate Republicans need to breathe new life into the nomination process – and, hopefully, get judicial confirmations back on track.

Want to get insider updates on Trump’s judicial nominees?

Visit our judicial nominees page for exclusive analysis and insight.