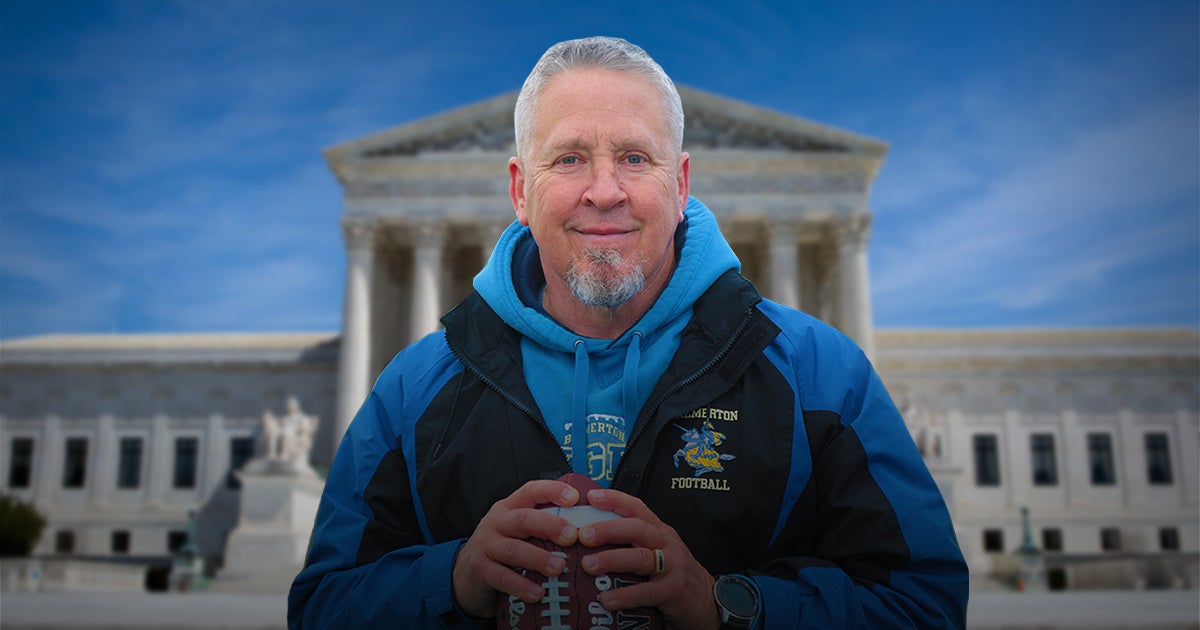 Last week, a three-judge panel of the Ninth Circuit ruled that the Bremerton School District in Washington state can ban Coach Kennedy from briefly and privately praying on the football field after games.

Let’s remember that back in 2017, the same three-judge panel of that court issued a stunning decision. In its prior ruling, the Ninth Circuit held that public employees are not protected by the First Amendment when they engage in religious conduct that is visible to others.

So, although the Ninth Circuit’s most recent opinion is disappointing, it was not unexpected.

The positive news is that the fight to reclaim Coach Kennedy’s religious freedom is far from over, as our game plan will be to appeal his case and possibly present it before the U.S. Supreme Court for a second time in the near future. And while a final victory isn’t guaranteed, it is within sight.

Watch the video below. In it, First Liberty’s General Counsel, Mike Berry, explains the Ninth Circuit’s decision in more detail, and what’s to come in the next several months as our legal team prepares to take the case before the nation’s highest court:

Looking ahead, we can’t forget one of the greatest signs of hope for Coach Kennedy. In 2019, the Supreme Court declined to review the case at that time, but four justices (Justice Alito joined by Justices Thomas, Gorsuch, and Kavanaugh) attached a rare and important statement signaling that the Court would be open to hearing the case at a future time:

But that’s not the only portion of the justices’ statement that’s become a source of great hope.

They also noted something very important about the legal arguments in Coach Kennedy’s case, something that could have a rippling effect for millions of people of faith across America who are fighting for their religious freedom in our nation’s courts.

Coach Kennedy’s primary legal argument was that the school district violated his free speech rights when it fired him for praying. That might seem odd because, while prayer is certainly speech, it is also religious exercise. But a decades old case, Employment Division v. Smith, seemed to foreclose the ability to argue that the school district also violated Kennedy’s free exercise rights. The justices noted this and not-so-subtly suggested that the Smith case should be revisited.

As we prepare to appeal the case, and potentially submit a petition to the Supreme Court, First Liberty’s legal team—alongside the elite volunteer network attorneys at Kirkland & Ellis, LLP—will have a unique opportunity to argue that the Smith decision was wrongly decided and should not result in millions of Americans losing their free exercise of religious liberty.

What’s more, if the case does proceed to the nation’s highest court, the question will be set up for the Supreme Court, which now has the added presence of Justice Amy Coney Barrett to the other justices who have already spoken out about this crucial issue of religious freedom in this case.

Just like our recent Supreme Court victory to protect the Bladensburg Peace Cross, the Coach Kennedy case presents a rare opportunity to overturn a bad precedent that has bound judges for decades to a much narrower view of religious liberty than the Founders intended. If successful, the result could mean that millions of Americans no longer have to choose between their jobs and their faith.