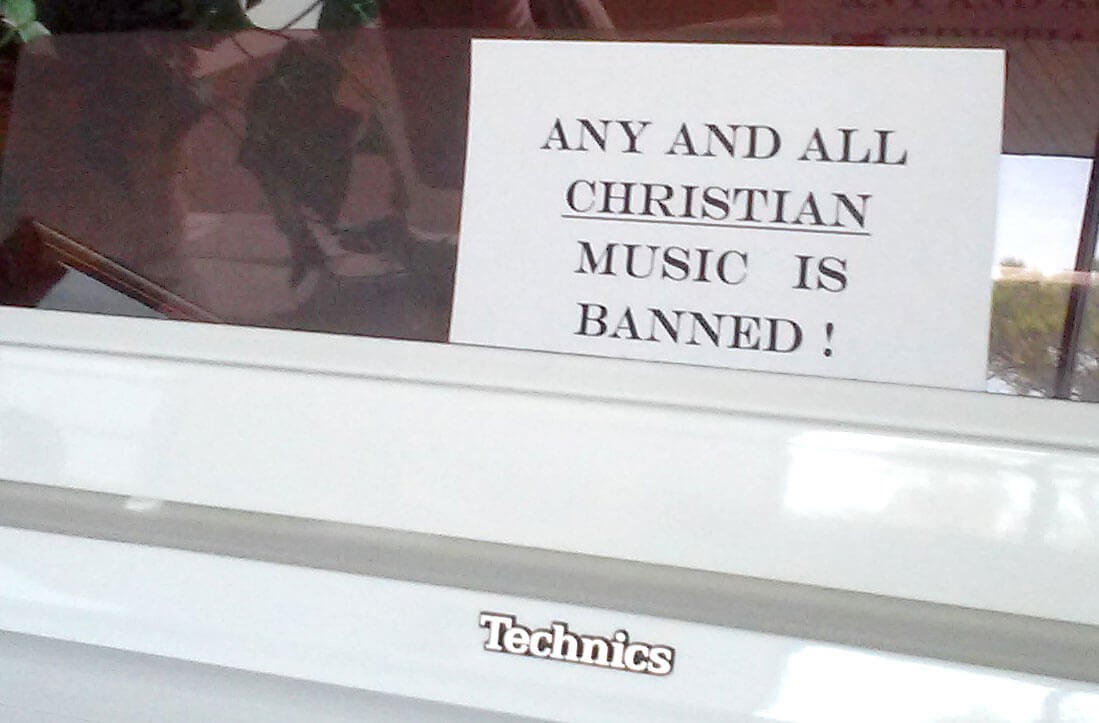 In Port Charlotte, Florida at a Florida Condo, a nasty sign says it all: “ANY AND ALL CHRISTIAN MUSIC IS BANNED.”

And that’s just the start; the story gets even more off-key from here.

Last week, First Liberty stepped in to help Donna Dunbar, a lay minister and recipient of the President’s Volunteer Service Award, from hosting a Bible study in the social room of her residential complex, Cambridge House Condominiums.

Over a year after beginning her small gathering, the Cambridge House Board of Directors – with no public notice – adopted a discriminatory resolution providing that “Prayers and other religious services, observations, or meetings of any nature shall not occur…in or upon any of the common elements.”

Here’s exactly how that translates: no prayers, no Bible studies, no hymns, no religious activity of any kind whatsoever is permitted in the common area of the condo.

“The unequal treatment of citizens in the community simply out of hostility to religion violates federal law and the First Amendment,” said Lea Patterson, Judicial Fellow at First Liberty.

Attorneys with First Liberty Institute submitted a letter to Secretary Ben Carson requesting that the Department of Housing and Urban Development investigate the matter and take all appropriate action to remedy this blatant case of religious discrimination.

So, do you like movies? Great, you can enjoy a “movie night.”

Fun board games? Have yourself a “Game Night.” Perhaps a challenging game of Texas Hold ‘Em is more to your liking? Excellent, because they’ve got TWO nights reserved for cards playing. And, don’t forget “Party Night” …along with playing all your favorite party tunes, like “All Night Long!”.

“The Board’s resolution poses no obstacle to a group meeting in the social room to study a secular book, watch a secular movie, listen to secular music, or carry on an organized secular discussion.”

But the resolution does preclude Mrs. Dunbar and other condominium residents from using the social room for any and all religious activity. The Board’s policy is so broad that it even forbids unobtrusive and silent prayer from the common area.

Shouldn’t the Dunbars – and all the people of faith at Cambridge House – have as much right to the social room as anyone else?

Fortunately, the law has already answered that question very clearly.

First and foremost, the First Amendment safeguards Mrs. Dunbar’s right to public religious expression, a right that has been affirmed time after time.

In a similar case, First Liberty represented senior citizens in Balch Springs, TX who were prevented by a city policy from praying before meals, listening to gospel music, or bringing religious speakers at a senior center.

Because of First Liberty’s legal action and victory in federal court, the city adopted a new policy allowing the center to be used “by any and all members and others lawfully on the center’s premises to engage in constitutionally protected speech without regard to its content or viewpoint.”

In other words, the city recognized that Balch Springs’ residents had a Constitutional right to religious expression.

And those same protections are applicable to Mrs. Dunbar and the residents of Cambridge House.

But there’s more. The Fair Housing Act protects citizens against religious discrimination in housing establishments. The Cambridge House Board is violating that law because it is denying residents access to a common area for any religious activity, while other residents are allowed to use the same facilities for similar non-religious purposes.

WILL THE CONDO BOARD CHANGE ITS TUNE?

The actions of the Cambridge House Board are not only damaging to its own residents, they are also a direct affront to the principles and the laws of our nation. The Board’s resolution only serves to push religious freedom deeper into the shadows of society.

The sign atop the lobby organ says it all.

First Liberty fights ardently so that religious discrimination of this kind is not allowed to persist. We fight back against these intolerant displays to ensure that we can retain the tolerant, diverse, and pluralistic values that are central to America’s identity.

The First Amendment exists precisely to protect the rights of residents like Mrs. Dunbar to have a Bible study, play hymns publicly and to pray without any reprisal. And that’s the reason why First Liberty is answering the call – being first in the fight – so that public religious expression continues to be a part of American life.