“No coach in this country should have to set down their faith when they pick up their whistle.” – Bobby Bowden 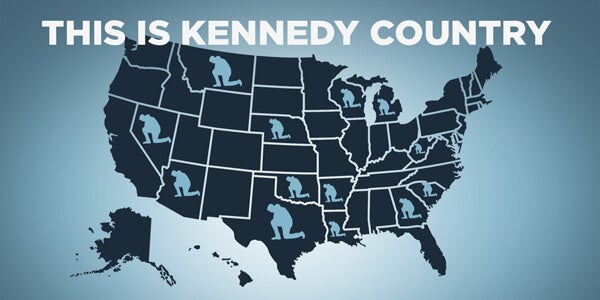 For legendary and beloved football coach Bobby Bowden, these three subjects hit very close to home. After spending more than half a century coaching football, Coach Bowden’s passion for the game wasn’t just limited to the drawing board, a playbook, or seasonal stats. His commitment went above and beyond. He instilled in his players a purpose higher than self and taught them determination when confronted with adversity.

Today, Coach Bowden continues to keep the spirit of courage and perseverance alive.

He is the latest to add his name in support of Coach Kennedy, urging the U.S. Supreme Court to reverse the injustice of Kennedy being fired from his coaching job for kneeling in prayer after games.

And Coach Bowden isn’t alone. Millions of Americans share his passion, not only for football, but more importantly, for the freedom to express, practice, and live according to one’s faith – in accordance with the rights granted by the U.S. Constitution.

From coast to coast, Coach Kennedy is receiving support from Congressional members, multiple state attorneys general, and a long list of the most influential religious organizations in America.

In a friend-of-the-court brief, Members of Congress – including Senators James Lankford, Ted Cruz, John Cornyn, Tom Cotton, Tim Scott, and Rand Paul – made it clear that “free exercise is stripped when government has the authority to dictate the time, place, and posture of a person’s private faith expression.”

Read the Full List of Amicus Support for Coach Kennedy

And that point is especially crucial in this case, because if Coach Kennedy’s constitutional rights aren’t vindicated, it will send a message that government can willfully transgress First Amendment rights of Americans. In practice, this will mean that Jewish teachers could be fired for wearing a yarmulke in sight of students, Catholic teachers would be at risk if they wear a crucifix, and Muslim teachers could face discrimination for wearing a hijab to work.

But that kind of governmental excess is inconsistent with the Constitution, federal law, and decades of legal precedent. In short, it is remiss – and in contradiction to America’s founding principles – to suggest that the First Amendment requires schools to be policed as religion-free zones.

On the contrary, the Constitution protects the right of Coach Kennedy – and that of all public school teachers or employees – to pray in public. Coaches, teachers, and students do not have to shed their constitutional rights at the school’s entrance, nor do they relinquish their religious freedom at a football game or during school-related functions.

The Final Showdown: The Game’s Not Over for Coach Kennedy!

The Supreme Court’s upcoming term is drawing closer, and people of faith throughout the country continue to join support of First Liberty and Coach Kennedy. The countdown clock is ticking away, and that’s why we need freedom-loving Americans – like you – to stand alongside First Liberty, as we fight for and protect the rights of all Americans to engage in religious expression without the fear of getting fired.

In America, no citizen should be put in the position of having to choose between their faith and their job. And that’s why First Liberty is first in the fight for religious freedom, so that what happened to Coach Kennedy does not happen to other Americans.

Join the Fight! Support Coach Kennedy and Get Your “First Down” Tee Today!