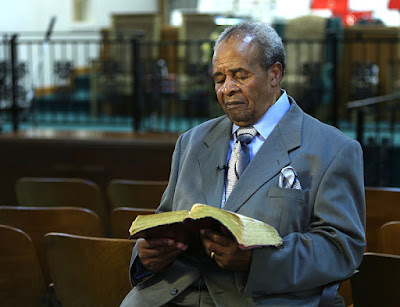 The Houston Housing Authority has backed off its threat to bulldoze a historic church after Liberty Institute filed a lawsuit against the City in early August. But even as the members of Christian Fellowship Missionary Baptist Church celebrate the victory, the Housing Authority remains intent on using eminent domain to seize the property of a neighboring church—the Latter Day Deliverance Revival Church.

Liberty Institute stepped in on August 3, 2015 alongside volunteer attorneys from Baker Botts LLP, suing the Houston Housing Authority  for their unlawful threats against both churches.

Fortunately, the Housing Authority listened—at least, partially. After a hearing on August 31, they rescinded their threat to bulldoze the Christian Fellowship Missionary Baptist Church.

“I didn’t get much sleep last night. I was up all night praying,” Pastor Quinton Smith of Christian Fellowship said on the day of the hearing. “But now I’m all prayed up and ready for anything! It’s a good day!”

“My great-granddaughter is six years old,” Pastor Smith’s wife added. “She keeps asking ‘Why do they want to take our church?’ She wants to get baptized at our church. She’s at home now, waiting to hear what the judge says. We told her we’re not going anywhere. We’re going to stay right here.”

It turns out that Pastor Smith’s prayers were answered, and his great-granddaughter can rest at ease. The members of Christian Fellowship Missionary Baptist Church can stay.

But for the members of the Latter Day Deliverance Revival Church, the battle continues.

In the hearing on August 31, a Harris County District Court judge denied Liberty Institute’s request for a temporary injunction, meaning that the Houston Housing Authority can continue to act against the Latter Day Deliverance Revival Church while the case progresses. And even though the City backed off of Christian Fellowship, they are still demanding Latter Day’s property.

The Latter Day Deliverance Revival Church has a long history in the Fifth Ward. Planted by Bishop Roy Lee Kossie almost 50 years ago, the church has expanded over time to include a children’s ministry center next door, a food pantry around the corner, and plot of land across the street—the property the Houston Housing Authority now wants to convert into a government project. That plot is currently used for regular tent revivals, as a central place to distribute food to those in need, and as a gathering space for other community outreaches, and the church hopes to continue expanding and possibly build more ministry space there.

“Our family has been in the Fifth Ward since the 60’s,” several of Bishop Kossie’s daughters, who gathered at the hearing, said. “Out of nine kids, seven of us were born in the Fifth Ward…Fifth Ward is our home. We want to stay here and be a part of the story God is telling in Fifth Ward.”

Despite the threats against them, members of the Latter Day Deliverance Revival Church are planning their next tent revival for this coming week. If the Houston Housing Authority has its way, it will be the last tent revival to be held on that property.

It isn’t even as if the Housing Authority is completely strapped for options. In her testimony at the hearing on August 31, Karen Kossie-Cheryshev, trustee for Latter Day Deliverance Revival Church, said that there are numerous alternative properties within one mile of the church, some already government-owned through Houston ISD.

So why is the Houston Housing Authority intent on seizing this particular property owned by this particular church? No church should live in fear of being forced out of their own property by the government.

“If the government can do this to us, they could do it to other churches,” said church member Simmie Driver at the hearing, where several members gathered for support. “That’s why we have to stand.”

“It’s tragic that the Houston Housing Authority wants to take the church’s property away and give it to someone else, just so they can make money,” said Jeremy Dys, Senior Counsel for Liberty Institute. “The government cannot take a church’s property and give it to some other business in violation of the law. These churches, their congregations, and this neighborhood are not for sale.”