First Liberty is excited to share that Coach Joe Kennedy will finally have his day in court.

The U.S. Supreme Court will hear oral argument on April 25th. This is a crucial case involving religious freedom that not only could restore Coach Joe’s right to pray. It could also have a broad impact for the right of public-school employees to freely live out their faith without the fear of losing their jobs.

If you have closely followed Coach Kennedy’s case, you know this has been a long and arduous legal battle. Now that it’s First & Goal and we’re so close to scoring a victory, it’s worth a recap of how it all started—remembering how Coach Joe’s heroic persistence helped bring him to this defining moment before the nation’s highest court.

Heroic Perseverance on the Football Field and the Battlefield

Before becoming an assistant coach for the Bremerton High School football team in Washington state, Joe Kennedy served in the armed forces for 20 years, most of that time in the U.S. Marine Corps. He spent time deployed overseas and participated in Operation Desert Shield and Desert Storm.

In 2008, he returned home from serving in the military and made a commitment to thank God after every football game—win or lose—for his team and the opportunity to be a football coach. So, after his inaugural game, Coach Kennedy kneeled on the 50-yard line for a brief, personal prayer.

For seven years Coach Joe lived out his faith on the field without receiving any complaints. Shockingly—after a compliment from a school administrator from a visiting team—the Bremerton School District prohibited him from engaging in “demonstrative religious activity” and ultimately told him any religious expression would have to be done where nobody could see him.

As a combat veteran, Coach Kennedy knows first-hand the sacrifices one must make to protect the liberties we cherish—especially the right to freely live out one’s faith. Not praying on his own after games would mean breaking his commitment to God and forfeiting the liberties he defended. He had to live up to what he’d learned as a U.S. Marine: to be semper fidelis—always faithful.

So, the Marine-turned-football coach did not back down when adversity came his way. He was not going to be bullied or pressured. He continued to pray. And for exercising his constitutional right, the school district fired him.

Never one to back down from a challenge, Coach Joe has braved through nearly seven years of litigation to restore his right to pray. His case has gone up and down and back up again through the federal courts. Despite numerous setbacks, his courage and tenacity have brought him to the most important showdown of all: the U.S. Supreme Court.

A win at the Supreme Court for Coach Kennedy could finally right the wrongs done to this American hero. A victory would allow him to return to the game he loves, while also being able to live out his faith, a freedom he valiantly fought to protect as a Marine.

An Opportunity for the Supreme Court to Review a Harmful Precedent

In addition to delivering justice for Coach Kennedy, this case presents an opportunity for the Supreme Court to review—and possibly rectify—legal precedent that has been harmful to religious freedom for decades.

Public employers, especially school districts, often misinterpret their civic obligations under the Free Exercise Clause and the Establishment Clause of the First Amendment. But now, we’ll be asking that the Court clarify the interaction of these clauses.

In other words, a ruling in Coach Kennedy’s favor could impact public school employees nationwide, helping safeguard their constitutional rights and ensure they won’t face a difficult choice between their careers and their faith.

One month away from presenting oral argument, we want to thank YOU for standing strong alongside Coach Kennedy and First Liberty. We couldn’t have gotten this far without your generous support.

In this final stretch and with so much at stake, we need your help so that our legal team can be razor-sharp when it argues before the Justices on April 25th. Your ongoing support can help deliver a victory for Coach Joe and potentially all Americans.

Will you support us with your donation today as we prepare for the biggest stage of all, the Supreme Court? 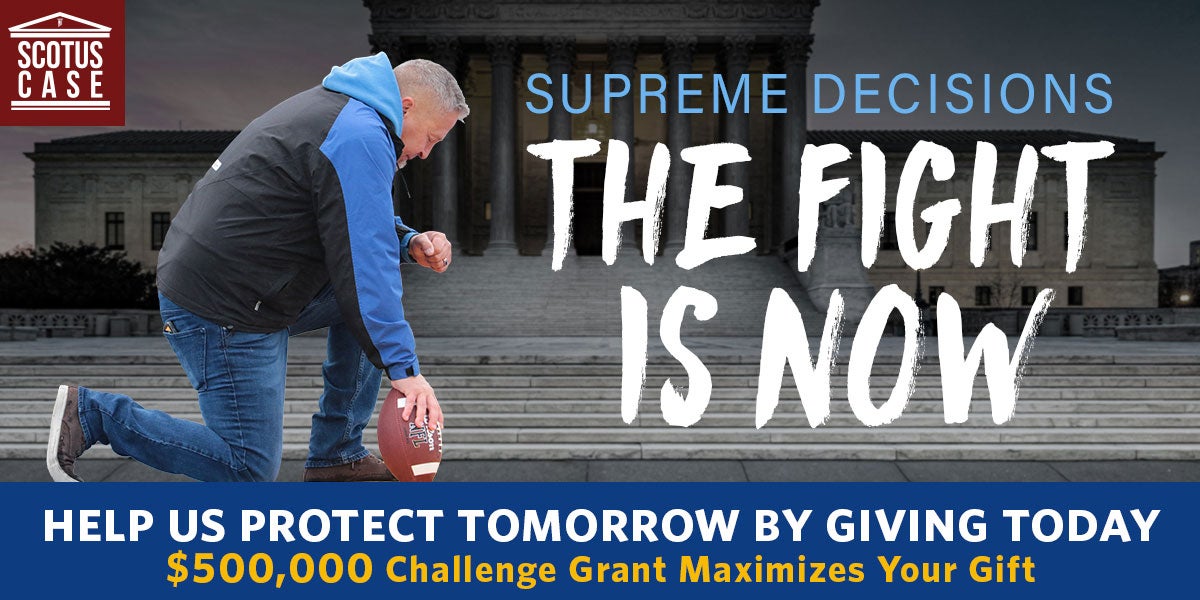