One Supreme Court Justice: How Important to Your Life?

During this election cycle, there has been plenty of discussion about the U.S. Supreme Court.

And indeed, when the new president takes the oath of office on January 20, one seat on the Court will likely remain vacant—that of the late Justice Antonin Scalia. Surveying the current justices, one has struggled with potentially life-threatening illness. Another is age 80, and yet another is 78. Vacancies could emerge any time.

So what might that mean for you, your family, and your religious freedom? 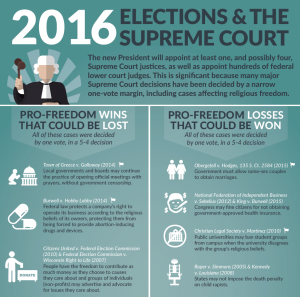 One or two justices could make the difference.

Religious imagery on public places you visit, or wish to visit, such as veterans memorials, could be removed. In the case of Salazar v. Buono (decided in 2010) a 5-4 majority of the Supreme Court stopped the government from tearing down a war memorial in the form of a cross—a precedent that would have cascaded through the country, mowing down other veterans memorials with religious imagery.

Businesses you enjoy—or even own—could be forced to violate their beliefs or suffer devastating fines. In the case of Burwell v. Hobby Lobby Stores, Inc. (decided in 2014), a 5-4 decision of the Court ruled that a company may operate its business according to the religious beliefs of its owners under federal law. The government was trying to force Hobby Lobby, owned by Christians, to facilitate the provision of health insurance that included abortion, considered by the owners to be sin.

Your local government meetings could be banned from opening with prayer. In the case of Town of Greece v. Galloway (decided in 2014), one vote on the Court meant that local governments and boards may continue the practice of opening official meetings with prayers. One vote!

A Religious Freedom Loss That Could Become a Win

Your child or grandchild could regain the benefit of having a religious group meeting on campus. In the case of Christian Legal Society v. Martinez (decided in 2010), the Court ruled 5-4 that public universities may ban student groups from campus when the university disagrees with the group’s religious beliefs.

These are only the recent cases, but serve to illustrate the stakes.

OTHER ONE-VOTE DECISIONS THAT AFFECT YOUR LIFE

These cases can act as weathervanes, indicating which way the ideological winds are blowing. So it’s doubly instructive to examine one-vote decisions that often parallel legal reasoning for religious freedom cases. Some of these significant non-religious freedom cases include the following:

Conservative Wins That Could Be Overturned

Your right to bear arms could be massively restricted. In the cases of District of Columbia v. Heller (2008) and McDonald v. Chicago (2010) the Court held by 5-4 decisions that individuals like you have a right to own handguns in their own home. One justice made the difference.

You, and those who agree with you, could lose your ability to contribute to election advocacy you care about. In the cases of Citizens United v. Federal Election Commission (2010) and Federal Election Commission v. Wisconsin Right to Life, Inc. (2007) the Court decided by one vote that people may contribute as much as they want to causes they care about. And groups of individuals (non-profit organizations) may advertise and advocate for issues. These protected a basic First Amendment right: free speech. By a single vote!

You, or businesses you depend on, could suffer severe economic consequences through extreme regulation. In the case of Michigan v. Environmental Protection Agency (2015), the Supreme Court ruled 5-4 that government cannot regulate industries without any consideration of the cost.

Organizations to which you or your loved ones belong could be forced to accept leaders that violate the organization’s values. In Boy Scouts of America v. Dale (2000), the Supreme Court held—by one vote—that private groups have a right to associate with whomever they please and choose their own members. A shift of one or two votes can mean the fundamental transformation or destruction of entire organizations.

The federal government could acquire even more massive powers to reach into more aspects of your pocketbook and life in general. In the cases of United States v. Lopez (1995) and United States v. Morrison (2000), the Supreme Court decided by one vote that Congress cannot use the Constitution’s Commerce Clause to regulate personal actions that do not have a substantial effect on interstate commerce or actions that are not economic in nature.. If that is overturned, a lot of local control will be lost, and so will your power to impact your community.

Liberal Losses That Could Be Reversed

You and others could regain your protection against the government seizing your property to satisfy private special interests. In the landmark case of Kelo v. City of New London (2005), the Court, by a single vote, decided that local governments may take peoples’ homes—and sell them to developers!

You could potentially get more health insurance options restored to you. In the case of National Federation of Independent Business v. Sebelius (2012),, the Supreme Court ruled 5-4 that the power to regulate interstate commerce does not include the power to order you to buy something that will bring you under the control of the federal government. It was only one shy of the government claiming the power to control every purchase decision you make in your household.

Your state could regain the power to enforce capital punishment on the most heinous criminals. In the cases of Roper v. Simmons (2005) and Kennedy v. Louisiana (2008), the Supreme Court took away the right of states impose the death penalty on child rapists and, separately, on anyone under 18 years of age.

Your state could regain the right to define marriage. In the case of Obergefell v. Hodges (2015) the Court ruled by one vote that the U.S. Constitution makes it illegal for any state to define marriage as one man with one woman.

THE SUPREME COURT IS IMPORTANT—AND PRECARIOUS

Although many debate whether the Supreme Court should have such power under the Constitution, the fact is that under modern legal trends, the Court is indeed supreme. It is a powerful issue in any federal election, especially for U.S. President and Senate, and especially in our time.