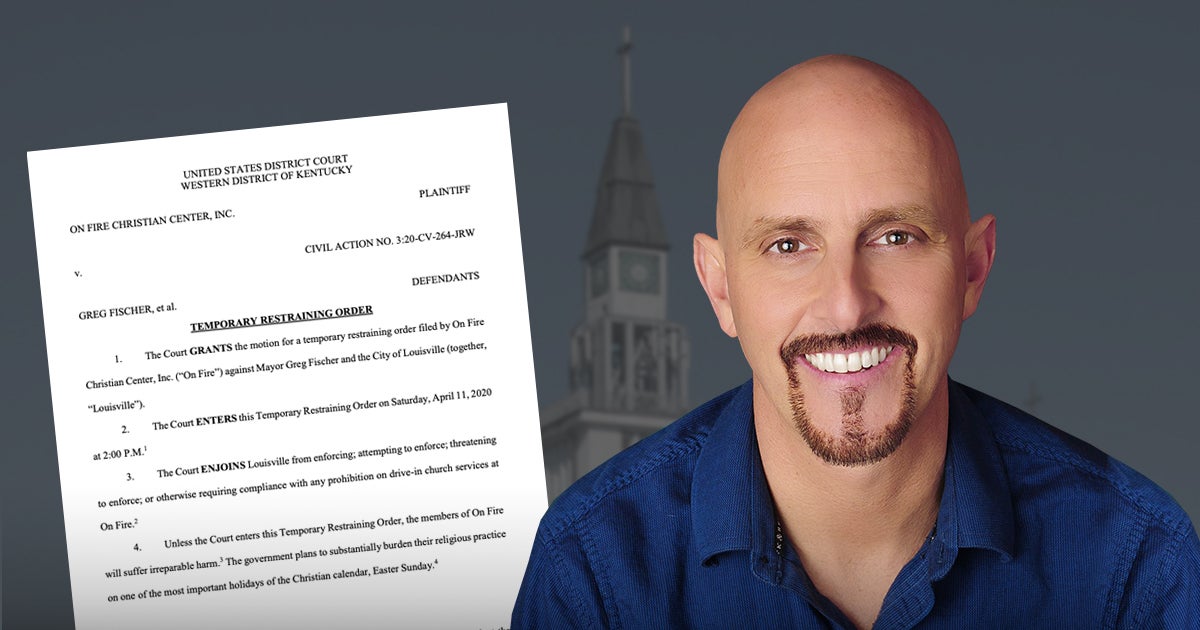 This weekend, as millions of Americans prepare to celebrate Easter and Passover, we’re taken back in memory to one year ago, when government officials tried to stop houses of worship across the nation from safely gathering to celebrate some of their most important religious holidays.

Amidst a wave of unconstitutional shutdowns of religious services, First Liberty secured a major victory for On Fire Christian Church in Louisville, KY. Our attorneys helped set a historic precedent in a crucial emergency injunction, at a time when thousands of houses of worship in America were facing an unprecedented crisis.

This critical first win was “the lawsuit heard across the nation” that set THE seminal precedent protecting our religious freedom moving forward, reaffirming that our constitutional rights are not suspended during a crisis or emergency.

A Stroll Down Memory Lane

At the height of the pandemic, people around the nation scrambled to protect Americans’ health while continuing with essential activities. Many aspects of our normal routines were paused.

But even in times of crisis and emergency, constitutional rights must never be placed on hold.

Several state and local governments ignored that truth. They issued irrational and unreasonable restrictions by shutting down churches everywhere…even when other establishments were deemed “essential” and allowed to operate…even when local churches were fully complying with CDC guidelines to protect the safety of their congregants.

That’s what happened to On Fire Christian Church in Louisville, days before its 2020 Easter service.

In an effort to safely gather for worship, On Fire Christian Church implemented a creative solution shared by many churches: drive-in services. It seemed like the perfect compromise between the need for social distancing and the need for religious believers to gather—until the mayor of Louisville interfered.

First Liberty attorneys quickly intervened by filing for an emergency federal injunction, which led to then-District Court Judge Justin Walker issuing what’s been called the “legal shot heard ‘round the world.” It was the first major legal triumph defending religious liberty during the pandemic, and it came the day before Easter:

After these initial battles with the city, the victory was solidified when First Liberty and our network volunteer attorneys at Wilmer Hale and Swansburg & Smith reached an agreement with the mayor of Louisville. He agreed that churches would be allowed to hold drive-in services going forward.

Now, one year later, Pastor Salvo recounts how crucial this victory was not only for his church, but for millions of other houses of worship. Watch our most recent episode of First Liberty Live! below:

First Liberty’s win for On Fire Christian Church set the stage for many other religious liberty victories during the pandemic.

These aren’t even all the victories that followed Judge Walker’s “legal shot heard ‘round the world!” You can learn about many of our other legal triumphs here.

Triumphs All the Way to the U.S. Supreme Court

The legal battles over religious service lockdowns led to multiple important decisions from our nation’s federal courts, including the U.S. Supreme Court’s ruling in The Diocese of Brooklyn v. Cuomo. In that case, the Court ruled 5-4 in favor of New York’s houses of worship, stating:

The Diocese of Brooklyn precedent caused the Supreme Court to send multiple cases back down to the lower courts to be reviewed in light of the decision.

First Liberty’s victory for On Fire Christian Church was the first major opinion and led the way to ensure that Americans’ first freedom, religious freedom, was not unconstitutionally “suspended” during a pandemic.

Now, even as the nation begins to emerge from the pandemic, First Liberty remains vigilant. We will continue to be First in the Fight to defend religious liberty for all Americans, including in times of crisis.