The Uphill Slog Towards Packing the U.S. Supreme Court with More Justices 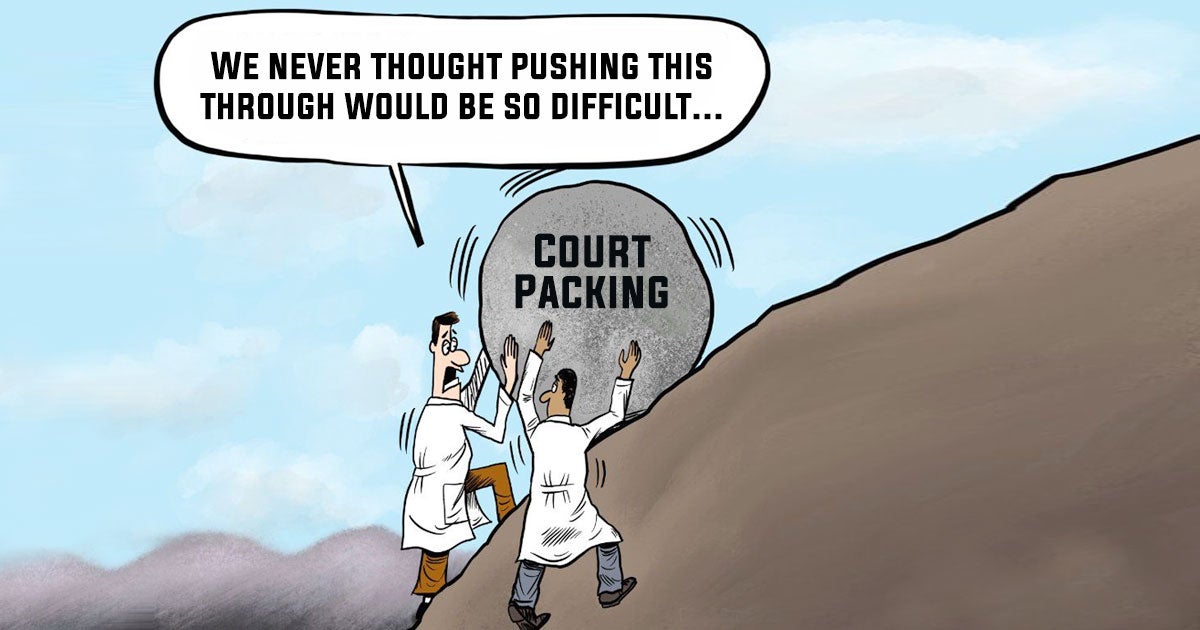 Now that Amy Coney Barrett has been sworn in as our newest Supreme Court Justice, Americans are rightly concerned over calls by some on the Left to pack the U.S. Supreme Court in response to Barrett’s confirmation.

Since former Vice President Biden’s position on court packing has changed from opposition to “voters don’t deserve to know” his answer, to appointing a commission to study and recommend reforms to the Court, those who revere the Constitution and rely upon its protection are asking a la Simon and Garfunkel, “Where have you gone, Hatton W. Sumners? Our nation turns its lonely eyes to you.”

In 1937, after the U.S. Supreme Court struck down portions of the New Deal, President Franklin Delano Roosevelt announced a plan to pack the Supreme Court with Justices who would uphold his proposals. A Democrat Congressman from Texas, Hatton W. Sumners chaired the House Judiciary Committee at the time. Sumners was widely considered an expert on the Constitution and possibly even a candidate for one of the new seats on the Court. When Sumners denounced court packing as an unconstitutional overreach of executive authority, his fealty to the blueprint of American liberty over partisan policy goals provided gravitas to the already snowballing public opinion against the plan.

Since that time, for nearly a century, court packing has remained the Sisyphean boulder no one wanted to resume pushing uphill…until now.

Sisyphus was sentenced to an eternity of futility as punishment for his arrogance and trickery. Senate Democrats destroyed the career of Robert Bork, attempted the same with Clarence Thomas and Brett Kavanaugh, and when in the majority, dispensed with the filibuster for judicial nominees despite warnings of repercussions when their party no longer controlled the Senate and the White House. Now deprived of legitimate means of opposition they find themselves relegated to the uphill slog towards court packing.

The notion of either party adding seats to the Supreme Court in order to impose partisan political agendas on the nation is more than just a theoretical debate for politicians or academics. The executive and legislative branches of government are accountable via the ballot box to the popular will of the people. The Constitution protects the federal judiciary from the political whims of the public in order for the judiciary to protect the God-given rights of each individual from popularly elected lawmakers. As Benjamin Franklin once described:

For decades the Left has considered the Supreme Court their super-legislature and preferred forum for controversial social policymaking when thwarted by the people’s elected representatives in the constitutionally-ordained legislative process. If the Supreme Court becomes just another political body, what protection remains for Americans whose beliefs are in the minority? What defense mechanism is left for those who want to exercise their right to live consistently with their religious convictions?

People of all faiths increasingly find their traditional views on sexuality, gender, beginning and end of life issues, and the role of religion in public life at odds with cultural orthodoxy.

These include many of First Liberty clients, like Coach Joe Kennedy, who lost his job as a football coach in Washington for kneeling in silent prayer after games; Aaron and Melissa Klein, the Oregon couple whose family business Sweetcakes by Melissa was bankrupted by a state bureaucrat due to the Kleins’ views on marriage; Gail Blair a blind senior citizen banned from a park in Rhode Island for sharing a gospel of John tract with interested park patrons; and countless churches, synagogues, and mosques across the nation forced to choose between following dictates of their faith or complying with tyrannical government orders banning worship.

These and millions of other Americans could no longer rely on the First Amendment guarantee of religious freedom if the Supreme Court’s interpretation of the Constitution is dependent upon the outcome of elections.

Turning the Supreme Court into another partisan policymaking battlefield would destroy the constitutional order and the fundamental freedoms therein enshrined which have made our nation the world’s beacon of freedom and hope since our founding.

The American people knew it in 1937 and when Congressman Hatton W. Sumners stood up to the most popular president in his own party’s history, the American people stood with him. Ironically, Joe Biden himself could have played the role of Sumners. Biden once opposed court packing in the presidential primary debates.

Americans across the political spectrum who esteem the Constitution and its separation of powers to protect individual liberty are left searching in vain for a modern Democrat with the courage to put country before party…and it feels like pushing a boulder uphill.