Police Chief Under Fire for ‘In God We Trust’ Decals

After coming under fire for placing “In God We Trust” decals on his department’s cruisers, Childress Police Chief Adrian Garcia has enlisted the help of Liberty Institute for the coming legal battle. 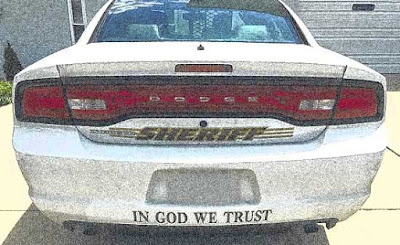 A career in law enforcement has never been considered a particularly safe job. But in today’s America, the risks are dramatically increased.

Threats and deadly violence against law enforcement officers have become disturbingly more frequent, and in response, many police chiefs and sheriffs across America have opted to place decals of the nation’s motto—“In God We Trust”—prominently on their cruisers to boost patriotism.

One such police chief is Adrian Garcia of Childress, Texas. At the beginning of September, shortly after the ambush and murder of Harris County Deputy Sheriff Darren Goforth, Garcia jumped aboard the patriotic bandwagon.

He went to Facebook with a photo revealing the new decals.

BULLIED FOR DISPLAYING THE NATIONAL MOTTO

Our national motto, “In God We Trust,” appears in public places all over America. It’s engraved on government buildings, printed on American coins and bills, and immortalized in iconic presidential addresses. Now, it’s plastered on some patrol vehicles. While that shouldn’t be a problem, it quickly became one.

When the trend began, Freedom From Religion Foundation (FFRF) complained, sending 50 lettersto various police chiefs and sheriffs around the country who had chosen to display the national motto on their vehicles. Garcia was one recipient.

“The idea that it’s illegal for police or sheriffs to have the national motto on their car is ridiculous,” said Kelly Shackelford, President and CEO of Liberty Institute. “The America the complainers are attempting to create would be a nation hostile to religion and its religious heritage. It would be a nation that strips any mention of God from the public square. That might have worked in the U.S.S.R., but it does not work in the United States of America.”

In an interview with the Los Angeles Times on Tuesday, FFRF leader Annie Laurie Gaylor freely admitted to her organization’s war against the four words in question, claiming as “successes” times when FFRF prevented city chambers from displaying the national motto.

In addition to incorrectly stating that displaying the national motto on patrol vehicles violates the separation of church and state, Gaylor insulted law enforcement officers who chose to display the motto, saying, “It is so anti-intellectual imagining that God will protect them.”

Thankfully, historical and legal evidence is against Gaylor and FFRF. Federal Courts routinely rule in favor of the national motto. Just nine years ago in 2006, on the 50th anniversary of the motto’s adoption, the Senate affirmed the words “In God We Trust” as the motto of the United States of America.

Despite the complaints and ruffled feathers from anti-religious groups like FFRF, the law is clearly on the side of the motto and the officers who have chosen to display it. It is completely appropriate and lawful for officers to place the national motto on their patrol vehicles.

STAND WITH LAW ENFORCEMENT AND “IN GOD WE TRUST”

Law enforcement officers risk their lives daily to keep the rest of us safe. In a time like this, distractions like unfounded letters from FFRF are the last thing they need.

Chief Garcia has set a noble example in his refusal to remove the decals. With legal assistance from Liberty Institute, and the support of patriots like you, officers like Garcia will be able to continue the proud display of “In God We Trust.”