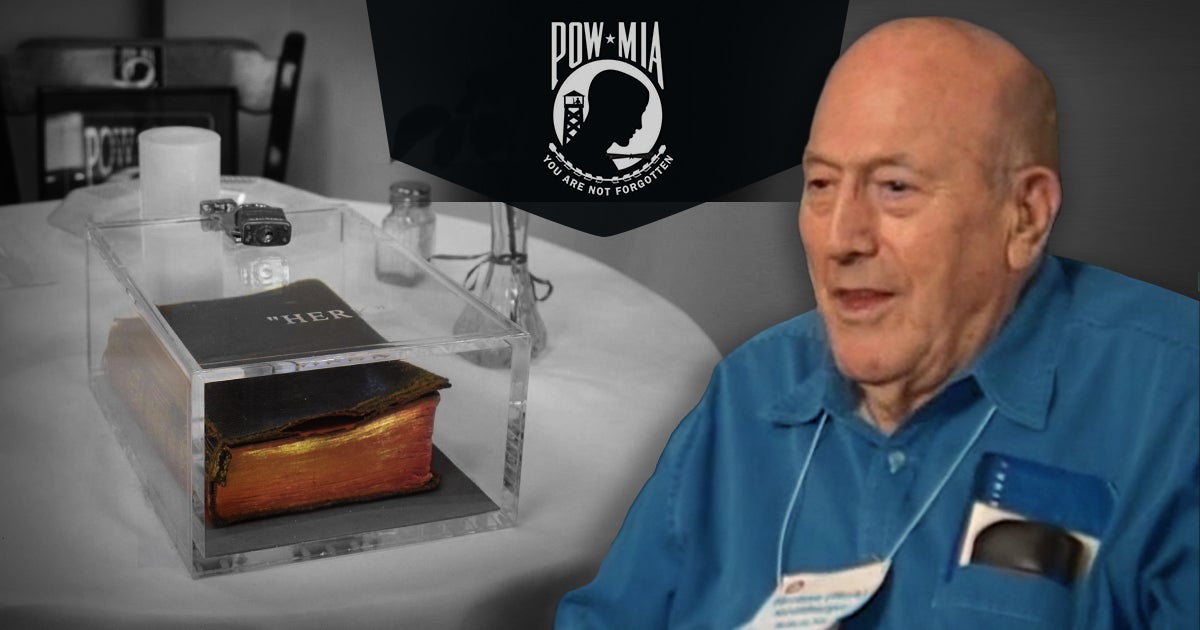 Today, we want to share with you the story of U.S. Army Air Corps Technical Sergeant (TSgt) Herman “Herk” Streitburger.

In 1941, TSgt Streitburger enlisted in the U.S. Army Air Corps and became a gunner and radio operator aboard a B-24 Liberator bomber during World War II. He was 21 years old.

A few weeks after the 1944 D-Day invasion, TSgt Streitburger and his crew were on a mission to Vienna, Austria. His bomber got as far as Hungary when they came under attack by German Luftwaffe fighters. TSgt Streitburger’s plane was shot down and two of his crewmen were killed. He and eight others were captured by German forces.

TSgt Streitburger and several of his brothers-in-arms were brought to a prison camp in northern Germany. A year later, he and two others managed to escape, hiding in the woods until they were rescued by British troops.

During his capture, he found strength in his faith, and years later he graciously donated his Bible to be part of a POW/MIA Remembrance Table at a local VA hospital in Manchester, NH.

First Liberty Institute is currently fighting to defend this very display because an outside group more than 2000 miles away filed a lawsuit demanding the Bible be removed, even going so far as to call it “repugnant.”

We recently sat down with First Liberty Institute’s Executive VP and former USAF fighter pilot Dave Holmes to hear why honoring military veterans especially POWs is close to his heart.

Like thousands of other service members and veterans, TSgt Streitburger is a living example of American prisoners of war who’ve relied on their faith as a source of comfort and courage during their captivity.

In recognition of this, our nation has maintained the sacred tradition of setting a separate table in countless Department of Defense and VA facilities to honor prisoners of war and those who went missing in action. Typically, these tables are decorated with several items, each carrying symbolic meaning to help remember their sacrifice.

TSgt Streitburger explained in his own words the value and importance of faith: “If ever I had fallen behind on my prayers, I made up for it during my captivity and my combat days.” He went on to state that his prayers provided him “great solace.”

That’s why removing any Bible from a POW/MIA Remembrance Table or display would be an insult to the memory of TSgt Streitburger. Not to mention, it would also be a dishonor to countless brave American heroes who’ve had to endure torture, imprisonment and cruelty while in the hands of the enemy.

Simply put, it’s shocking for an activist group to claim that a donated Bible at a VA hospital violates the Constitution. After all, no visitor, employee or patient is being forced to read it. It is simply meant to help us remember the strength gained through faith, especially for those who’ve been captured.

What’s more, a VA medical facility is exactly the sort of place where veterans and their loved ones may decide to think about faith and religious matters. It would be completely insensitive, and even cruel, to tell sick and ailing VA patients that a hospital is no place for them to seek spiritual and religious guidance.

The VA is absolutely within the bounds of the Constitution, federal law and VA policies to allow the display of a donated Bible. This zealous, yet misguided group of activists will have to go through us if they want to desecrate a POW/Mia display that honors TSgt Streitburger and thousands of our courageous military service members.

Follow us on social for the latest updates on this case.