First Liberty Poll: Do You Think the U.S. Supreme Court Needs to Be Restructured? 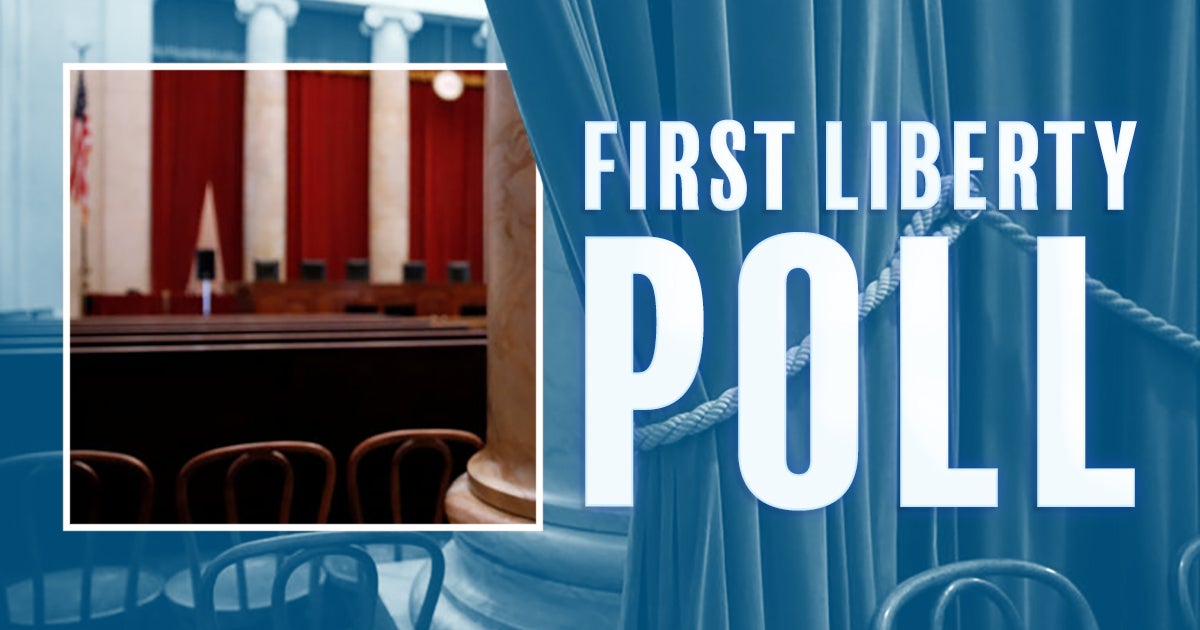 Can you name all Justices of the U.S. Supreme Court?

If you’re having trouble remembering the names of the nine current Justices…imagine having to recall the name of 11, 13, or even 15 of them!

Is it impossible for that many judges to sit in America’s High Court?

Apparently, there are some who think the SCOTUS bench isn’t deep enough. A scan of recent headlines shows there is a faction of U.S. Senators and presidential contenders calling for a restructuring of the Court by increasing the numbers of seats.

And they aren’t the only ones thinking about these changes.

A recent Quinnipiac poll reported that 55% of Americans think the U.S. Supreme Court is mainly motivated by political concerns, instead of being focused on interpreting the law.

As a follow-up, the poll asked whether or not the U.S. Supreme Court should be restructured. 51% of Americans responded that they think our nation’s highest court needs some type of change to reduce the influence of politics.

The Constitution does give the legislative branch the authority to alter the jurisdiction and composition of federal courts, but we ought to pause and think more thoroughly about whether we should actually tamper with the make-up of the High Court.

Will changing the structure really solve the problem – or is it just covering up the symptoms?

America’s courts are critical to the preservation of your religious liberty. Get First Liberty’s expert insight on nominees and the status of confirmations with our interactive maps. Learn more.

Judicial Activism: A Problem That Goes Much Deeper

The root of the problem isn’t necessarily with the organization of the Supreme Court or federal courts across the country.

As our legal experts have explained, much of the growing concern about the politicization of the judiciary comes from an increasing trend to use courts as mini-legislature. Far too frequently, court rulings aren’t an interpretation of the law, they are legislative edicts and policy prescriptions disguised in judicial robes.

So, is today’s public demand for the restructuring of our Supreme Court – including a recent and growing call to “pack the bench” with more Justices – a viable solution?

It’s an available option, but it’s likely not the cure.

At this point in American history, hyper-partisanship continues to sow divisions between citizens while also chipping at the foundations of our best and most virtuous institutions, such as the Supreme Court.

Isn’t adding 2, 4 or 6 more Justices to the SCOTUS bench itself motivated by a political urge? In a way, this would just mean we’re caving into more political theater and gamesmanship, which are the root of the issue.

Alexander Hamilton was clear in Federalist No. 78 about the need guard the judiciary, to the greatest practical extent, from the tides, swells and whims of legislative politics. He wrote:

Packing the SCTOUS bench would just be another partisan, ideological reaction because we don’t like the current Justices or we disagree with the political views of the president who nominated them.

But curing judicial activism won’t happen if we inject more politics, or more Justices for that matter.

To begin restoring our judiciary, we must go back to basics, to the American Founders’ original intent when they wrote the Constitution. Our elected representatives, and we as citizens, must make an earnest effort to remove partisan influences from the judicial process. That means appointing and confirming judges who are committed to interpreting the law, and leaving policy to policymakers.

30-Second Poll – What Do You Think About Changing the Structure of the Supreme Court?