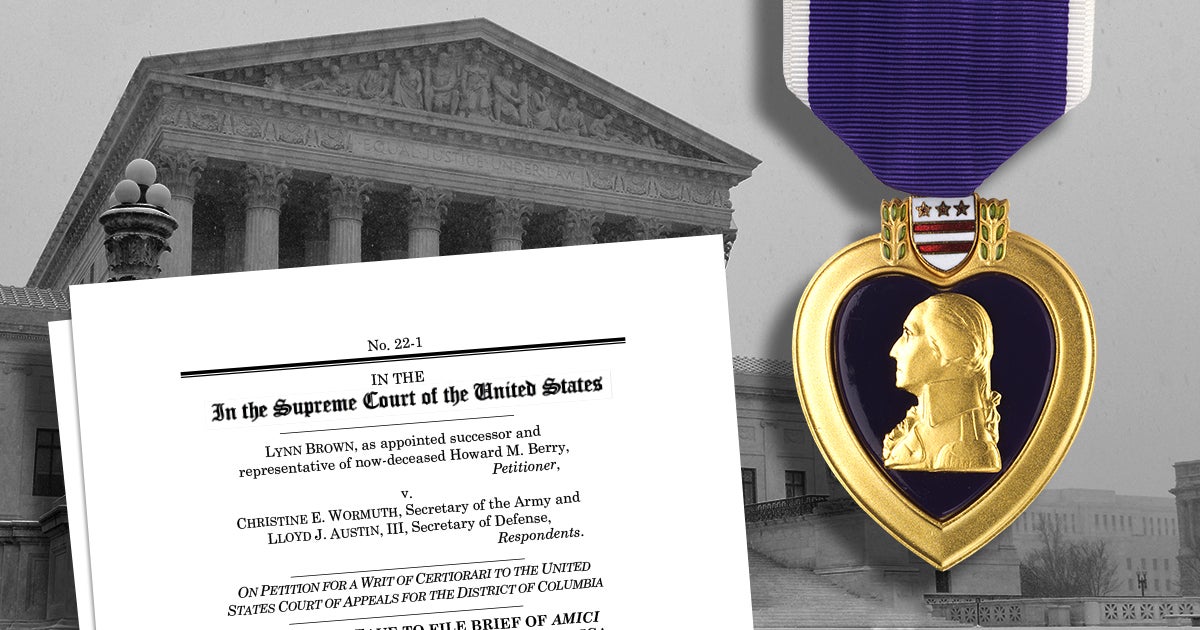 First Liberty is asking the U.S. Supreme Court to reconsider its standard of “unusual deference” to military officials and reverse the Army’s denial of a Purple Heart to Army Staff Sergeant (SSG) and American hero Joshua Berry. We filed a friend-of-the-court brief in Brown v. Wormuth, a case currently being appealed to the high court, recommending a change in the standard, because it could have a significant impact on religious freedom cases.

SSG Berry was injured in the Fort Hood, Texas shooting in 2009. U.S. Army Major Nidal Hassan opened fire at the military base in a heinous act of terrorism that would take 13 lives and wound 30 others.

When Hassan attempted to enter the building Berry and others were in, SSG Berry helped others find cover and then braced the door. Hassan fired three shots at the door, causing Berry to leap for cover behind a desk. While lunging, SSG Berry dislocated his shoulder. Due to his shoulder injury and ongoing Post Traumatic Stress Disorder, SSG Berry was released from active duty and placed on the temporary disability retirement list. Tragically, SSG Berry took his life two years later.

President Obama famously declared Hasan’s murderous rampage an act of “workplace violence.”  But two years after SSG Berry’s death, Congress designated it as an “international terrorist attack.” This important change allowed those injured and killed in the attack to be awarded the Purple Heart.

SSG Berry was entitled to receive the Purple Heart posthumously. According to Army regulations, when eligibility criteria are met, the Purple Heart must be awarded. The Army Board for Correction of Military Records (ABCMR) also confirmed and recommended that he receive the medal. The ABCMR is the highest level of administrative review within the Department of the Army with the mission to correct errors in or remove injustices from Army military records.

His family members began the emotional process of applying for SSG Berry to receive the award posthumously, so they could present it to SSG Berry’s daughter to commemorate her father’s honorable service and sacrifice.

The Army initially agreed. But the Deputy Secretary of the Army issued a stunning reversal:

“I have reviewed the findings, conclusions, and Board member recommendations. I find there is not sufficient evidence to grant relief…I have determined that the facts do not support a conclusion that SSG Berry’s injury met the criteria for a Purple Heart.”

The Secretary of the Army provided no further explanation or reasoning.

The Berry family sued in federal court to ensure his daughter could receive his Purple Heart. Lower courts, however, refused to rectify the situation, citing “unusual deference” to the military. In other words, they’re arguing that judges are not supposed to intrude in military matters.

It’s true that America’s judges are not equipped to run its Army. Nonetheless, judges have a constitutional duty to ensure all government officials—including military officials—follow the law. Under the Constitution, the military not only takes orders from the President as Commander in Chief, but also from Congress. And in this case, Congress directed the military to view the Fort Hood attack as an “international terrorist attack,” making those injured and killed in the attack eligible for the Purple Heart. It’s crystal clear that SSG Berry and the dozens of other victims are entitled to receive this recognition.

When Congress has spoken, the courts must uphold the law as written by Congress. However, in SSG Berry’s case, the courts have defaulted on their duty by granting the military “unusual deference.” This standard must be fixed. It presents the Supreme Court with an opportunity to do so, as they honor the sacrifice of a hero.

Beyond awards, fixing the “unusual deference” standard also has major implications for religious liberty. The military frequently fails to respect service members’ religious liberty, and the courts have been reluctant to intervene in these cases, citing “unusual deference.” By fixing this standard, the Supreme Court can help protect the rights of our service members.

The Army’s denial is heartless and wrong. Military heroes like SSG Berry should be remembered and recognized. Just as they did not give up on their country, First Liberty will never give up on our service members. They courageously fight for us, sometimes putting their lives in great danger and some even make the ultimate sacrifice—all so that we can live in liberty. We will keep fighting to honor them and protect their constitutional rights, including their right to live and serve in a manner consistent with their religious beliefs.