‘Stand Like a Rock:’ Honoring a Man who Honored Religious Freedom

Taking a moment to honor Thomas Jefferson and his advocacy for religious freedom. 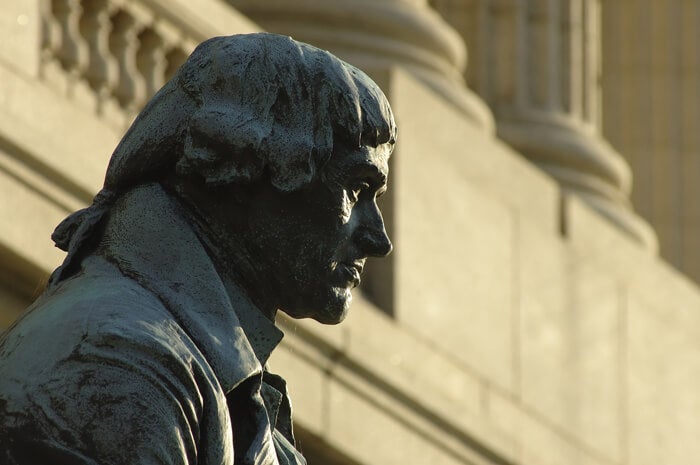 Last Wednesday marked the anniversary of Thomas Jefferson’s 273rd birthday. A renaissance man with a long and accomplished legacy, Jefferson played a major role in the founding of the United States of America—and establishing its strong protections for religious freedom for all.

Ironically, Thomas Jefferson has become somewhat of a folk hero of contemporary opponents of open, free, public exercise of religion. Yet anyone walking into the magnificent rotunda of the Jefferson Memorial in Washington, DC will notice something striking. Of five Jefferson quotes engraved in large letters on the stone of the memorial, four concern God’s role in human affairs or freedom of conscience from government tyranny.

So who was Thomas Jefferson in the context of religious liberty?

Champion of “our Creator”

As the primary author of the Declaration of Independence, Jefferson exemplified his deep commitment to the divine origin of the rights of each individual in the famous line, “We hold these truths to be self evident, that all men are created equal, that they are endowed by their Creator with certain unalienable rights; that among these are Life, Liberty, and the pursuit of Happiness.”

In essence, America’s “birth certificate,” as penned by Jefferson, declared that God existed, and that His existence was the basis for all personal, political, and economic rights.

Advocate for the Bill of Rights and the First Amendment

Among these rights, Jefferson believed that the right to religious expression was one of the most important rights a human could possess. Jefferson’s first criticism of the Constitution when it was drafted in 1787 was its lack of a Bill of Rights,[1] and most importantly, its lack of protection for the free expression of religion.

Author of the Virginia Statute of Religious Freedom

One of Jefferson’s lesser-known achievements is authoring the Virginia Statute of Religious Freedom.[2] He wrote the statute in 1786 after a number of groups voiced their concerns about their freedom to practice their faith.

Jefferson reinforced his commitment to religious freedom for all in a letter to the Danbury Baptists, a religious group in Connecticut concerned with their state government’s weak religious liberty protections.

Writing them in 1802, shortly following his election to the Presidency, Jefferson stated:

Today, Jefferson’s phrase “wall of separation” has been twisted out of context to support excluding faith from civic life and even to advance persecution by government of people of faith. Jefferson would be appalled. Clearly, his intent was to affirm that government should not violate the free religious exercise of its citizens.

Thomas Jefferson made it very clear to many that no individual should:,

[S]uffer on account of his religious opinions or belief; but that all men shall be free to profess, and by argument to maintain, their opinion in matters of religion, and that the same shall in no wise diminish, enlarge, or affect their civil capacities.

Supporter of Religion’s Role in a Healthy Civil Society

Jefferson believed that religion was important to civil society for a good and moral generation to form. In his 1800 presidential election campaign and throughout his presidency, Jefferson emphasized the natural and inalienable rights of the common many, which he believed necessary for a flourishing society. He advocated that in order for the country to operate true to the manner in which it was designed, the people needed to be involved, and should not be hindered from doing so merely because of their religious faith, or a lack thereof.

“STAND LIKE A ROCK:” TAKING QUEUES FROM JEFFERSON TODAY

Though religious freedom is under attack in this nation like never before, those who support religious freedom for all Americans must remember that while defending our first freedom might not be the popular point of view, especially with elites who often hold disproportionate power, we must never allow our unalienable rights to fall prey to what is popular or trendy.

Thomas Jefferson himself embodied this idea when he said, “on matters of style, swim with the current, on matters of principle, stand like a rock.”

In recognition of the anniversary of his birthday, we celebrate Thomas Jefferson for his dedication to promoting and advocating for religious freedom, and for contributing to our country as one of its most prominent Founding Fathers.