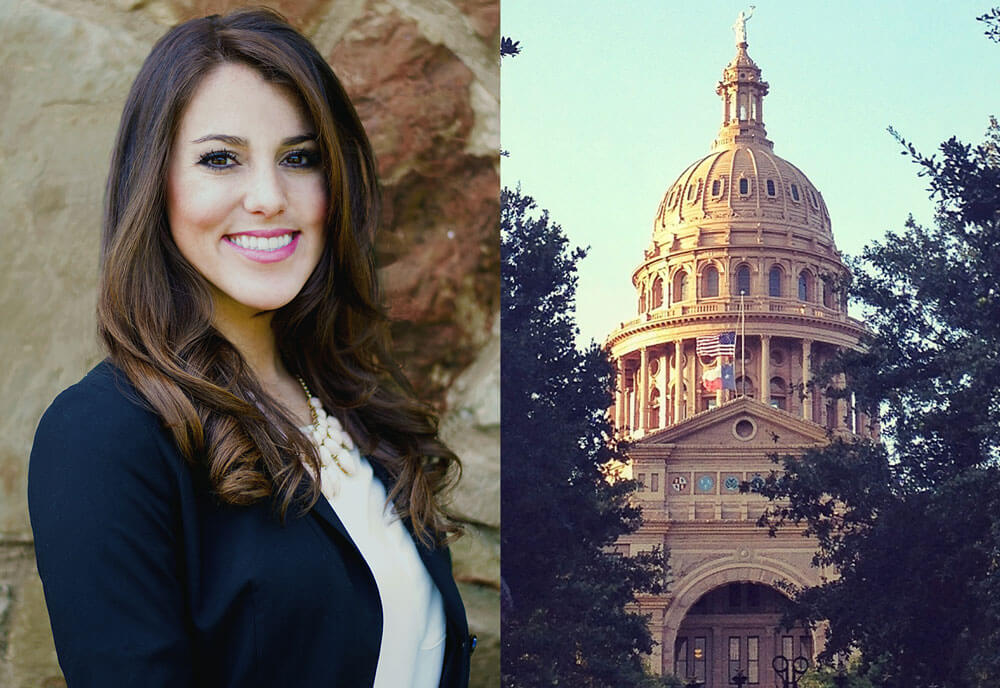 As America’s largest legal organization solely dedicated to defending religious freedom, First Liberty continues to expand its influence throughout the country. Our attorneys are increasingly solidifying their standing as trusted and credible subject matter experts.

Last week, First Liberty’s attorney, Chelsey Youman, testified at a session held by members of the Texas Senate Committee on State Affairs. Only a handful of the most respected firms and individuals in the country are asked to offer expert testimony on topics that affect the lives of millions of the state’s residents.

And First Liberty was among those chosen.

Representing First Liberty, Youman offered unique insight into the measures and actions that are being taken to protect religious liberty, as well as outlining the areas for needed improvement.

In her testimony, Youman spoke about the significance of the Religious Freedom Restoration Act (RFRA) as a tool in defending the religious liberty of the state’s residents. It’s important to note, however, that states with RFRA laws in place are essentially balancing the interests of the state with the burden placed on religious individuals.

With this in mind, RFRA does serve as a blanket protection of religious liberty, but there is still a considerable degree of leeway given to judges. Some judges may weigh the balances in the government’s favor while others may weigh the same balances on the side of the religious adherent.

To resolve this issue, many states are creating specific provisions that clearly protect the rights of religious individuals and organizations. For example, Texas passed House Bill 3859, which implemented protections in the context of child welfare service providers. Because of this legislation, faith-based non-profits like Bethany Christian Services, Catholic Charities, and Lutheran Social Services, can now conduct their work backed by precise laws and can place children in homes in accordance with their beliefs.

“By setting bright-line rules on particular topics, the legislation also ensures that both religious adherents and government officials know what is and is not protected religious conduct,” Youman explained. “The uncertainty of hoping that a judge will weigh the balances in your favor so that you can follow your religious beliefs is removed.”

And that’s good news not only for people of faith but also for all residents within their respective state.

These are positive steps, without a doubt. But there is still much more that states can do to protect religious freedom.

Passing legislation consistent with Supreme Court precedent that prevents religious entities from having to choose between their religious identities and receiving a generally available government benefit.

Protecting the Religious Rights of Professionals

Enacting religious conscience measures that enumerate the rights and protections professionals have in their trade or industry (i.e. pharmacists, like those we supported within our amicus brief in Stormans v. Weisman, who object to prescribing abortifacients).

Adopting a bill that would create a set of statewide, uniform guidelines that govern how religious exemptions are applied. Currently, rights vary drastically from precinct, city, or county, which creates confusion about the rights given to religious individuals and organizations.

THE RULE, NOT THE EXCEPTION

“Finally, it should be noted that conscience protections for religious dissenters are the rule in the American legal tradition – not the exception.”

Because First Liberty continues to successfully defend religious freedom inside the courtroom, state legislatures recognize our attorneys’ expertise on religious rights and the First Amendment.

Offering critical insight to state leaders and decision-makers is yet another way that First Liberty is first in the fight to protect and restore religious liberty for all Americans.