Support Pours in for Christian Bakers Who Lost Their Business 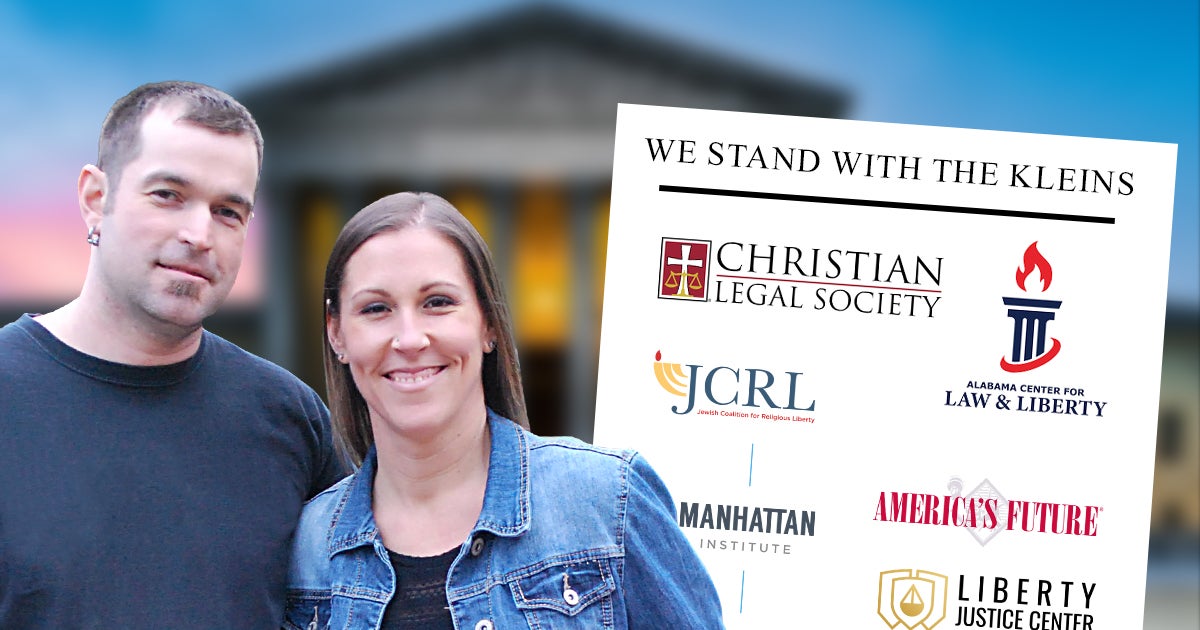 We’re asking the Court to reverse a state court decision that effectively forced the Kleins to shut down their Oregon bakery, Sweet Cakes by Melissa. They declined to create a custom cake for a same-sex wedding because doing so would force them to convey a message that conflicts with their religious beliefs. An Oregon state agency ruled the Kleins violated a public accommodations law and imposed a devastating penalty of $135,000.

We argue that the Constitution protects the Kleins and all Americans from being forced to express a message with which they disagree. Our petition to the Court states that “forcing artists to design, create, and decorate custom products against their strongest beliefs abridges the freedom protected by the Free Speech Clause” of the First Amendment.

As the Supreme Court deliberates whether to hear their case, Americans are coming together to support the Kleins. We’re happy to announce that 14 friend-of-the-court (amicus) briefs have been filed at the nation’s highest court supporting their case. This includes briefs from a broad coalition of organizations and leaders such as:

This diverse showing of support for the Kleins highlights just how vital this case is for religious liberty in America.

During the previous Supreme Court term, 11 amicus briefs were filed in First Liberty’s Treat Children Fairly case (Carson v. Makin) at this stage of the legal process. A total of 10 amicus briefs were filed in our Coach Kennedy case (Kennedy v. Bremerton School District). That many briefs for each of those cases was a tremendous display of support. Those cases resulted in major decisions that had a positive, rippling effect on the freedom and rights of thousands of religious parents, students, schools, teachers, coaches and employees across the country.

With this many amicus briefs filed, it’s clear that many Americans recognize the huge implications of the Sweet Cakes case. From cake artists and florists to photographers and designers, religious people in the marketplace are facing the threat of closure for operating in accordance with their religious beliefs. This is one of the most pressing issues of our time. A win for the Kleins could set a precedent that protects countless religious Americans from being forced to choose between violating their beliefs or losing their business.

In their brief, the State Attorneys General write:

“This case is about the freedom of artistic expression and religious exercise that should be protected by government rather than threatened by it. As part of our fixed constellation of individual rights, no government—even one with the best of intentions—may commandeer the artistic talents of its citizens by ordering them to create expression which the government agrees but the artist does not.”

In its brief, the Alabama Center for Law and Liberty explains that core constitutional freedoms are at stake in this case:

“If the Court compels a baker to conform to the messages they convey to the popular opinion, then both the diversity of thought in this country and the freedom of speech under the First Amendment will cease to exist.”

Members of Congress state in their brief that this case “raises a fundamental question of Constitutional freedom.” Indeed, the Sweet Cakes case presents the Supreme Court with this vital question: Can the government compel Americans to create a message that conflicts with their deepest convictions?

Aaron and Melissa deserve justice. A win for them would be a win for all Americans. It would deliver relief to countless faith-based business owners who face hostile treatment and the real threat of closure and bankruptcy because of their beliefs. Will you join First Liberty as we continue fighting this important case at the highest court? Your support is critical to help ensure that people like the Kleins across the country don’t lose their business, their livelihood or their job for living out their faith.