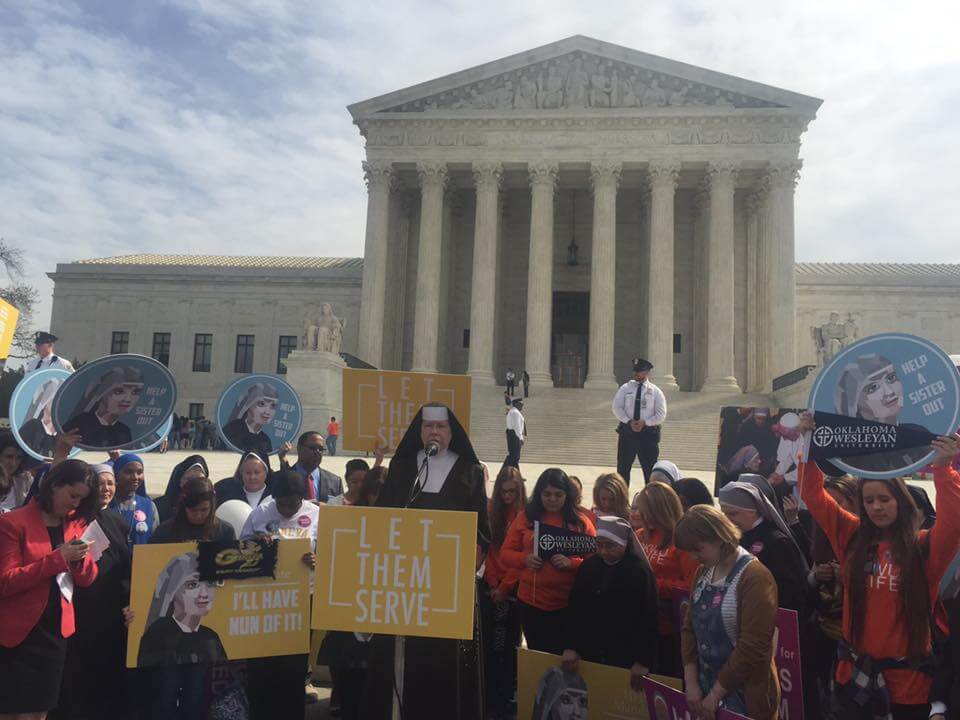 The HHS “Abortion Pill” Mandate is a portion of the Patient Protection and Affordable Care Act, also known as the PPACA or “Obamacare,” that forces group health insurance plans to provide coverage for abortion-inducing drugs or devices. Churches, church denominations, and even major national corporations are exempt from this mandate—but faith-based ministries like the Little Sisters of the Poor are not. To learn more about the HHS Mandate, click here.

The U.S. Supreme Court recently heard oral arguments this week in Zubik v. Burwell, a case that will significantly impact the future of faith-based non-profits in America.

Though the case’s most notable plaintiff is the Catholic non-profit Little Sisters of the Poor—a group of nuns devoted to helping needy elderly of all races and religions—the plaintiffs include several faith-based non-profits that are challenging the federal government’s Health and Human Services (HHS) Mandate.

The HHS “Abortion Pill” Mandate is a portion of the Patient Protection and Affordable Care Act, also known as the PPACA or “Obamacare,” that forces group health insurance plans to provide coverage for abortion-inducing drugs or devices. While churches, church denominations, and even major national corporations are exempt from the mandate, faith-based non-profits are not.

Several faith-based non-profits have joined their names to Zubik v. Burwell through amicus briefs, including First Liberty’s clients: four retirement communities and two colleges, each a ministry of The Christian and Missionary Alliance (CMA) denomination. Read about First Liberty’s brief on behalf of the CMA ministries here.

Kelly Shackelford, President and CEO of First Liberty, sat in the Supreme Court Chamber for the oral arguments, along with First Liberty Senior Counsel Ken Klukowski.

“I was encouraged by the argument before the Court and felt it went very well,” Shackelford said. “While I was concerned by the Solicitor General’s suggestion that the government can refuse to exempt churches from the mandate and can force them to provide abortion-inducing drugs in violation of their conscience, I think it’s clear a majority of the Court does not share that extreme position. We are hopeful the justices will respect the religious liberty of all religious orders and non-profits in their decision.”

“If the Supreme Court rejects the arguments of the plaintiffs in Zubik v. Burwell, then First Liberty’s clients—and all faith-based non-profit ministries—will face damaging consequences and suffer loss of their religious liberty,” he added.

The outcome of Zubik v. Burwell, likely to occur before the Court’s term ends in June, will determine whether the HHS Mandate violates the religious liberty rights of faith-based, non-profit ministries under the Religious Freedom Restoration Act (RFRA).

BUT ISN’T THE BATTLE OVER? DIDN’T HOBBY LOBBY WIN?

In Hobby Lobby v. Burwell, the Supreme Court ruled in favor of Hobby Lobby Stores, Inc., establishing that religiously affiliated, family-owned for-profit businesses could not be forced to violate their beliefs by complying with the “Abortion Pill” Mandate. The 2014 ruling was a substantial victory for religious freedom—but not a total victory.

The decision was limited to the protection of closely-held for-profit businesses, leaving non-profit ministries—which fall neither within the exempted church category nor the Hobby Lobby precedent—subject to the coercive demands of the federal government.

Since the PPACA became law, dozens of faith-based, non-profit ministries have brought their cases before courts, hoping to achieve the same kind of legal relief for their sincerely held religious beliefs as for-profit businesses received in the Hobby Lobby decision. But time and again, federal appellate courts have ruled against them.

In September 2015, however, the Eighth Circuit Court of Appeals shook things up and become the first circuit court to reject the government’s arguments and rule in favor of the religious liberty rights of faith-based non-profits. This ruling caused a circuit split, leading the United States Supreme Court to take up these cases.

This ongoing issue and the outcome of the oral arguments in Zubik v. Burwell matter for several reasons.

First, the impact of religious non-profit ministries of all kinds is too significant to be measured. Consider First Liberty’s clients:

There are dozens more faith-based non-profit ministries that are currently waiting on the Supreme Court to determine if they will be permitted to freely exercise their sincere religious beliefs—including the belief that is morally and ethically wrong to participate in the termination of unborn human life. Should the federal government prevail in this battle, religious non-profit ministries all around America will be affected, and their impactful work compromised.