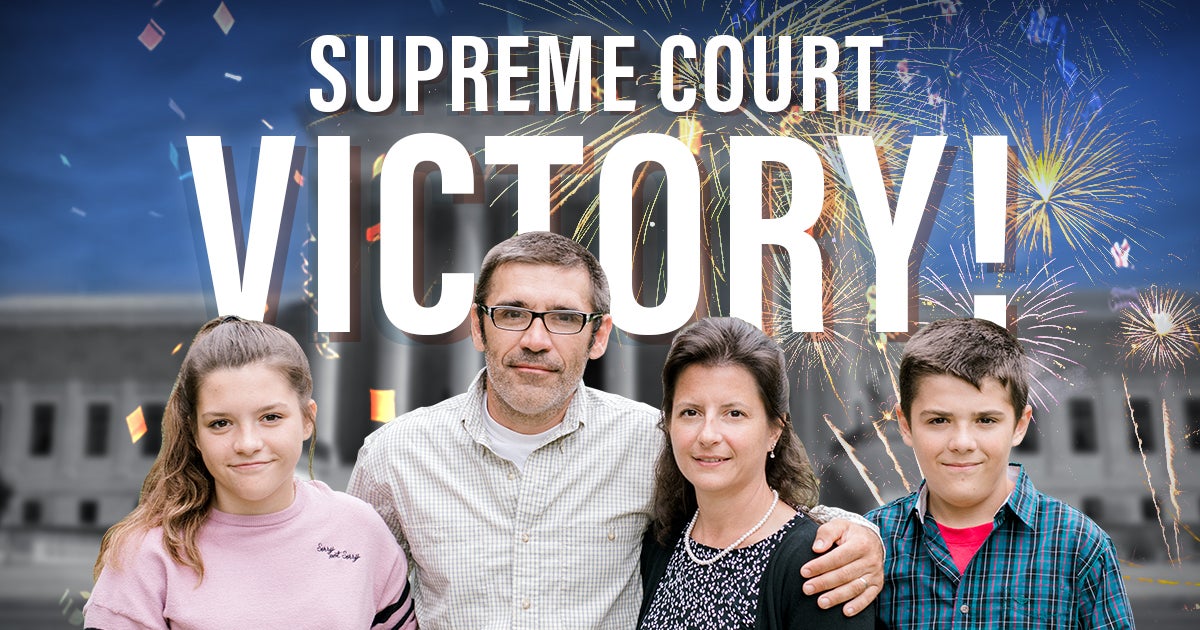 Can the government discriminate against parents who choose religious schools for their children?

This week, the U.S. Supreme Court answered with a resounding “No!”

In a 6-3 decision, the Court ruled in favor of students’ rights in our Treat Children Fairly case, Carson v. Makin, which we brought together with the Institute for Justice. This ruling affirms that states cannot discriminate against parents who want to send their children to religious schools under government student-aid programs.

The Supreme Court held that what Maine did was wrong and unconstitutional:

“Maine’s ‘nonsectarian’ requirement for its otherwise generally available tuition assistance payments violates the Free Exercise Clause of the First Amendment. Regardless of how the benefit and restriction are described, the program operates to identify and exclude otherwise eligible schools on the basis of their religious exercise.”

“The State pays tuition for certain students at private schools—so long as the schools are not religious. That is discrimination against religion.”

“We are thrilled that the Court affirmed once again that religious discrimination will not be tolerated in this country. Parents in Maine, and all over the country, can now choose the best education for their kids without fearing retribution from the government. This is a great day for religious liberty in America.”

This ruling is an important victory that will result in greater freedom for families nationwide as they choose the best schools for their children, as well as fairness in how religious schools are regarded.

A Legal Victory That Ends Decades of Discrimination

Here’s a quick recap of how this case reached the nation’s highest court, and why the ruling is crucial win for religious liberty.

In 1903, Maine passed a law ensuring that all children would have access to primary and secondary education. But not every community had enough money—or students—to justify building their own schools.

When a school district did not provide a public high school, Maine would help fund tuition at any private school that families would choose. Throughout most of the program’s history, parents were free to choose religious schools. But that changed in the 1980s, when Maine’s Attorney General declared it was unconstitutional to include them in the program.

On behalf of three Maine families, the Institute for Justice and First Liberty filed suit. We argued that the Supreme Court has given the green light to include religious options in a school choice program. Supreme Court precedent makes it clear that barring parents from choosing religious options violates the Constitution. The high court heard oral argument in December 2021.

This week’s decision brings an end to decades of discrimination. It rights the wrongs done to our clients and to countless parents and students not only in Maine, but also across the country. It makes it clear that in America, families should not be excluded from participating in widely available public benefits, simply for choosing a religious education.

Thank you for your support and prayers. First Liberty and the Institute for Justice are excited about this major victory, as both parents’ rights and religious freedom were upheld.

We know that we could not have won at the Supreme Court without you. But our work to defend our constitutional right to live according to our faith is far from over.

Together, we will continue to fight for every American’s right to freely live out their faith.