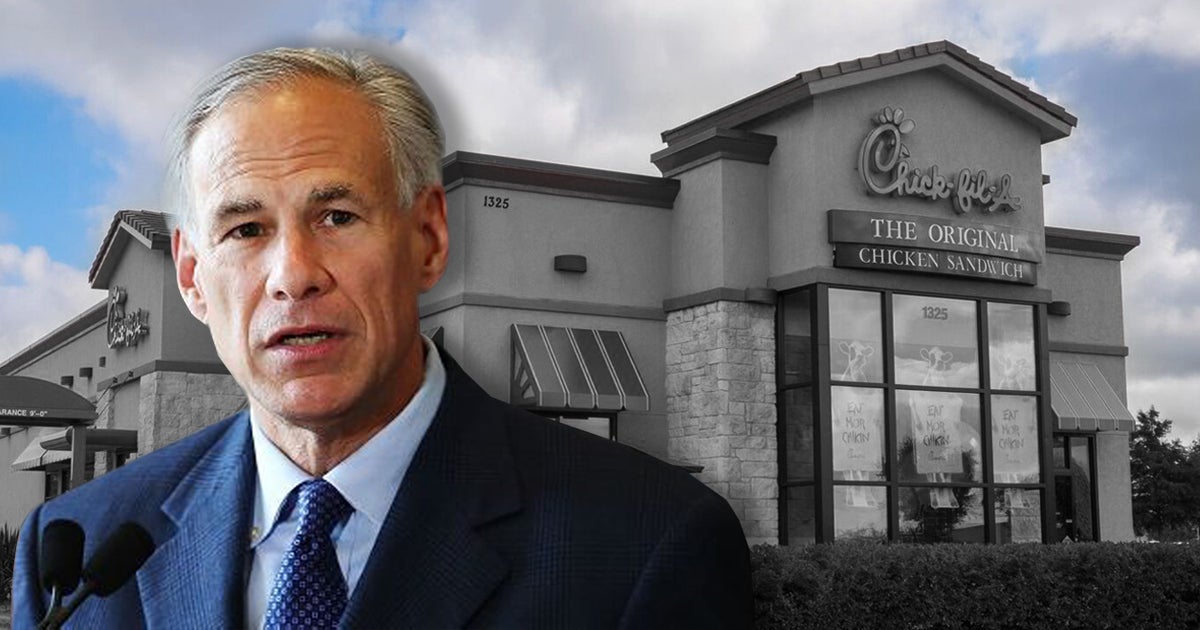 When religious freedom is on the line, the Lone Star State isn’t afraid to take a bold stand.

Last week Texas Governor Greg Abbott signed the “Save Chick-fil-A” bill into law. The legislation makes it illegal for the government to discriminate against people or businesses that make financial contributions to, or have memberships in, religious organizations.

Gov. Abbott hinted he would sign the bill days earlier, tweeting a picture of a Chick-fil-A meal, with his laptop open to a news story about the bill in the background. 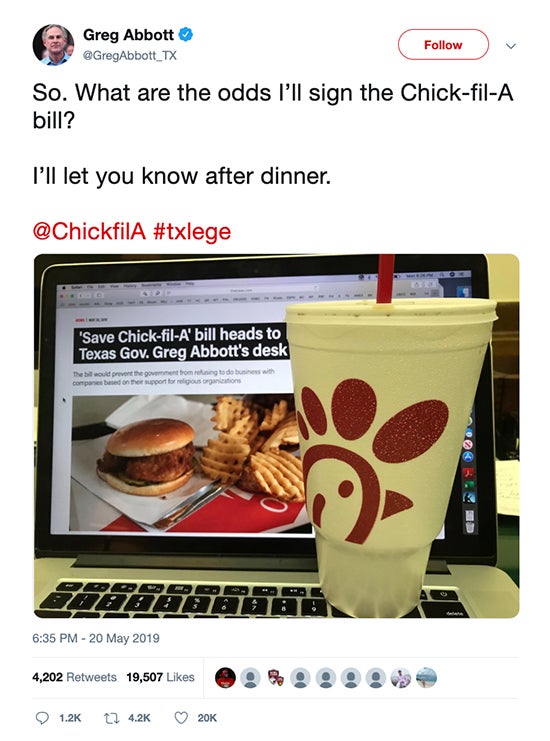 But beyond just protecting Chick-fil-A, this new law is also going to benefit Americans who choose to live according to their religious convictions, and who also operate their businesses consistent with their faith. It will ensure that people of faith are shielded from discrimination, and rather than being excluded from the marketplace, the law will further safeguard the First Amendment freedoms of religious Americans.

So why was this law necessary in the first place?

It came months after the San Antonio City Council voted to exclude Chick-fil-A from opening a location in its local airport, along with disparaging comments from some city council members who claimed that Chick-fil-A is a “symbol of hate,” and did not belong in a “city full of compassion.”

Why was Chick-fil-A, a restaurant chain committed to providing great food and quality service, called a “symbol of hate?” Because its current owners made donations to charitable organizations in line with their religious values — organizations like the Salvation Army, which works to combat homelessness, hunger, and poverty and other similar social issues.

Banning Chick-fil-A over its religious affiliations isn’t just a display of bigotry; it’s also a direct and outright violation of federal law and the Constitution. In particular, it’s a violation of the First Amendment to treat any organization with hostility just because of the religious views of its owners.

In addition to this most recently passed bill, First Liberty Institute responded to San Antonio’s unlawful actions by calling for an official investigation by the U.S. Department of Transportation.

We emphasized that federal law and regulations prohibit recipients of federal grant funds, like the San Antonio airport, from engaging in religious discrimination. Thanks to our intervention, the Federal Aviation Administration (FAA), which is part of the Department of Transportation, responded to our request and is currently conducting an investigation.

Along with First Liberty Institute and the federal government, Texas Attorney General Ken Paxton’s office also opened an investigation into San Antonio’s decision to ban Chick-fil-A, seeking to expose any documents showing that city officials did engage in discriminatory actions.

Federal taxpayers should not be required to subsidize religious bigotry, and if San Antonio persists in its discrimination against Chick-fil-A, then the federal government should pull its grant money away from the city.

While states like Texas are dedicated to advancing religious freedom for all their residents, other states are bent on restricting it. Two recent examples are Oregon and Colorado, which both penalized businesses — Sweet Cakes by Melissa and Masterpiece Cakeshop, respectively — that operated according to the owners’ religious values.

But recently, the U.S. Supreme Court made it clear that government hostility toward religious Americans will not be tolerated.

Just this week, in a major victory for religious freedom, the Supreme Court vacated Oregon’s decision to penalize First Liberty Institute client and cake artist Melissa Klein for running her family business, Sweet Cakes by Melissa, according to her  faith. In its ruling, the Court cited the similar Masterpiece decision from last year, which specifically stated that it is illegal for the government to show anti-religious bias against Americans who want to live consistent with their faith.

The Supreme Court’s overall message is the same one as the one sent by Texas’ “Save Chick-fil-A” bill: in America, you can’t penalize people or businesses for their religious beliefs.