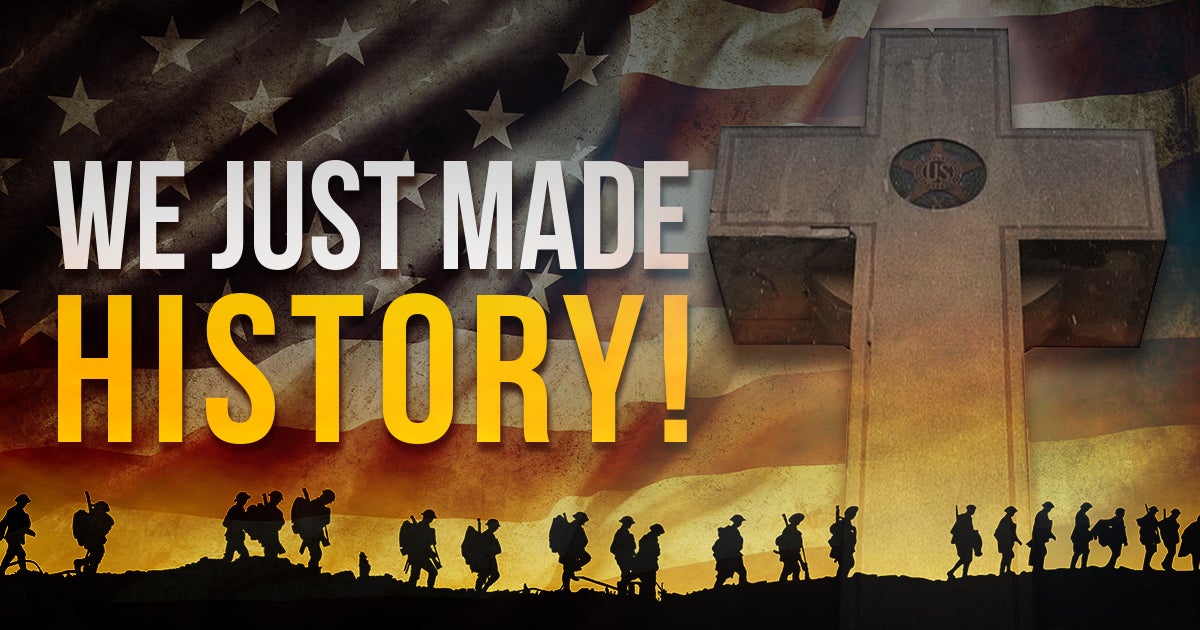 For the past 30 years I have dedicated myself to defending religious liberty. And throughout that time I’ve witnessed both major victories and difficult setbacks to the cause of our first freedom.

But it is no exaggeration to say that this week is the biggest and most momentous of my entire career.

This past month we’ve been sharing with you our Biggest 30 moments of impact for religious liberty in 2019 – and it’s been an exhilarating month to say the least, especially as it relates to our U.S. Supreme Court cases.

Yesterday, in a 7-2 decision, the Justices of the Supreme Court issued a landmark decision, declaring that the Bladensburg WWI Veterans Memorial is not coming down.

And earlier this week, the Supreme Court announced a critical victory for religious freedom in the Sweet Cakes by Melissa case, in which the Court made it clear that government hostility toward religious Americans will not be tolerated.

I want to take a moment to explain why these two cases are so important, and why they present an opportunity to usher in an era of religious liberty unparalleled by any in my lifetime.

In a landmark decision, the Supreme Court ruled that Bladensburg Memorial is constitutional and will remain standing.

This represents a historic victory for religious freedom in America. The Supreme Court’s message is clear: the attempted perversion of our Constitution is now over, and government is no longer hostile to Americans who express and live out their faith. The days of activist courts illegitimately weaponizing the First Amendment to attack religious symbols on public land are over.

With this ruling, the Supreme Court has set a precedent for other similar memorials across the country, including those in Arlington National Cemetery, protecting them from destruction and desecration.

What’s more, the Justices also made an important change in our constitutional law, returning to a more commonsense reading of the First Amendment. They put the so-called Lemon test, which has haunted religious freedom for nearly 50 years, on the shelf. Moving forward, monuments, displays and similar practices that include some form of religious expression are presumed to be constitutional, and the Lemon test does not apply to those.

Doing away with Lemon and returning to the original text and intent of the Establishment Clause is going to prevent citizens from being coerced with regard to their religion or compelled to support a state approved religion. This return to the Constitution helps bring clarity to this area of the law, which Justice Clarence Thomas has noted “is in hopeless disarray.”

Thanks to this decision, you and millions of Americans of all faiths now have more religious freedom than you’ve had in decades.

In our petition to the Supreme Court on behalf of Melissa Klein, the former owner of Sweet Cakes by Melissa, we sought justice for her and her family, whose business was bankrupted by a $135,000 penalty from the State of Oregon for not custom designing a wedding cake for a ceremony that conflicted with their deeply-held religious convictions.

In essence, the Supreme Court opened a door to victory, giving us an unprecedented opportunity to argue the Sweet Cakes case once again in the state courts. And if the Oregon Court of Appeals reaches the same conclusion it previously held even in light of Masterpiece, we would have yet another opportunity to petition the Supreme Court, ask for justice for the Kleins and of course review the Smith decision.

You might be wondering, why is it so important for the Court to review and possibly do away with the Smith ruling?

I can honestly say when I began defending religious liberty 30 years ago I never expected to see a day when the Supreme Court would put the Lemon test on the shelf, or to have an opportunity to present the Court with a case that could reverse the nightmare that is Smith.

We aren’t just witnessing history, we’re taking an active part in making history at the Supreme Court, and that fills me with more hope for the future of our nation than I can put into words. The full religious freedom put into place by our Founding Fathers is being restored in America. Let’s pray and keep working together to continue fighting—and winning—for our first freedom.