The Boys of Bladensburg in the Final Days of WWI 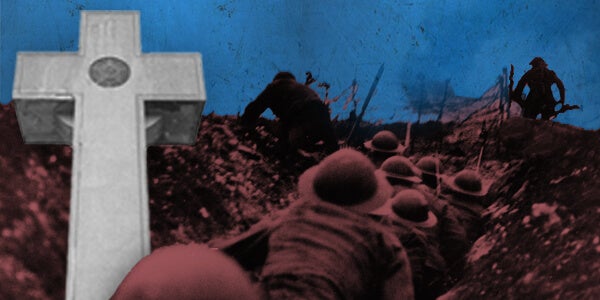 In the summer of 1918, three young men from Prince George’s County, MD sailed from the Chesapeake Bay near Virginia to the frontlines of WWI in France.

In just a few short months, these three Boys of Bladensburg entered the heat of battle in the final days of the 100 Days Offensive, joining millions of other American soldiers and Allied comrades.

Throughout October 1918, the Allied Expeditionary Force suffered heavy casualties as they sought to push through the German defense. The remaining troops – though weary – continued to launch attacks. By the third week, the Allies had penetrated the German defensive line and cleared the Argonne Forest.

Victory was almost within reach and a few short weeks later – on November 11, 1918 – the Great War came to an end with the signing of Armistice.

In this final special feature, we share the stories of three fallen American heroes from Prince George’s County who did not live to see the day of triumph. Their sacrifice and service, however, is alive with us today because their names are inscribed on the Bladensburg WWI Veterans Memorial.

Born on January 15, 1894, Charles Francis Huntemann, was accomplished from a very young age. He graduated from the first officer’s training camp at Fort Myer (Arlington, VA) as 2nd Lieutenant and was sent from there to the Warfare School at Harvard. Huntemann registered for the draft in June of 1917 and entered the Officers Reserve Corp shortly thereafter.

In May of 1918, 2nd Lieutenant Huntemann sailed for France from Norfolk, VA aboard the USS Zeelania. He was a part of Company K, 111th Regiment US Infantry, 80th Division.

In early October he was promoted to 1st Lieutenant, Company K, 319th Regiment US Infantry, serving in this position for the slightest pass of time before being killed in action on October 10, 1918.

Huntemann’s body was buried in an isolated grave at Commune Brielle’s sur Meuse, France. He was later reinterred at Argonne American Cemetery in France, where the grave was marked with a cross with his identification tags affixed.

A few weeks before his death, the Evening Star ran a story, recalling how Lieut. Huntemann sent home a unique ornament from the battlefield:

“TINY AIRPLANE MADE OF SHELL FRAGMENTS” Lieut. Huntemann Sends Home One Manufactured of Remnants Found in No Man’s Land. A unique ornament in the form of a miniature airplane, made from remnants of German shells which were found on the battlefield in no man’s land by Lieut. Charles F. Huntemann, has been received here by Miss Hannah J. Hannaway… It is made up of a base which is the metal part of a fuse of a shrapnel, and in the nose of the fuse is a Mauser cartridge, which forms the shaft on which the small airplane is suspended…The body of the airplane is made of a Mauser cartridge…The wheels and propellers are made of small pieces of aluminum. The planes are about six inches across. Miss Hannaway received the gift several days ago from Lieut. Huntemann by mail.

William Lee’s draft card – dated June of 1917 – indicates that he was a 27-year-old farmer, born in either Leeland or Upper Marlboro, MD.

On March 30, 1918, he sailed to France on the USS Sesquehana, departing from Newport News, VA. As WWI waged on, Lee served as a part of the 93rd Division, a segregated unit that fought alongside the French 157th Infantry Division – the historic “Red Hand” Division.

Little is known about Joseph Ford’s life, but it is recorded that in 1910, at the age of 20, Ford resided with family in Prince George’s County, MD and spent his days as a laborer.

Eight years later – also on March 30, 1918 – Ford sailed across the Atlantic from Newport News, VA, aboard the USS Sesquehana. He was assigned to Company A, 372 US Infantry and made the ultimate sacrifice on October 2 when he was killed in action.

A cross-shaped headstone with his identification tags affixed was placed above the grave at Argonne American Cemetery, Romagne-sous-Montfaucon, Meuse, France, where his body was reinterred the summer of 1919.

With the 100th anniversary of the end of WWI fast approaching, we take time to remember all the Boys of Bladensburg who fought and paid the ultimate price in defense of freedom. Their service was not in vain, and their stories must not become a footnote in history.

That’s why today we’re standing strong to prevent the destruction or disfigurement of the Bladensburg WWI Veterans Memorial – the eternal gravestone of those 49 fallen heroes who gave it all in the battlefields of the Great War.