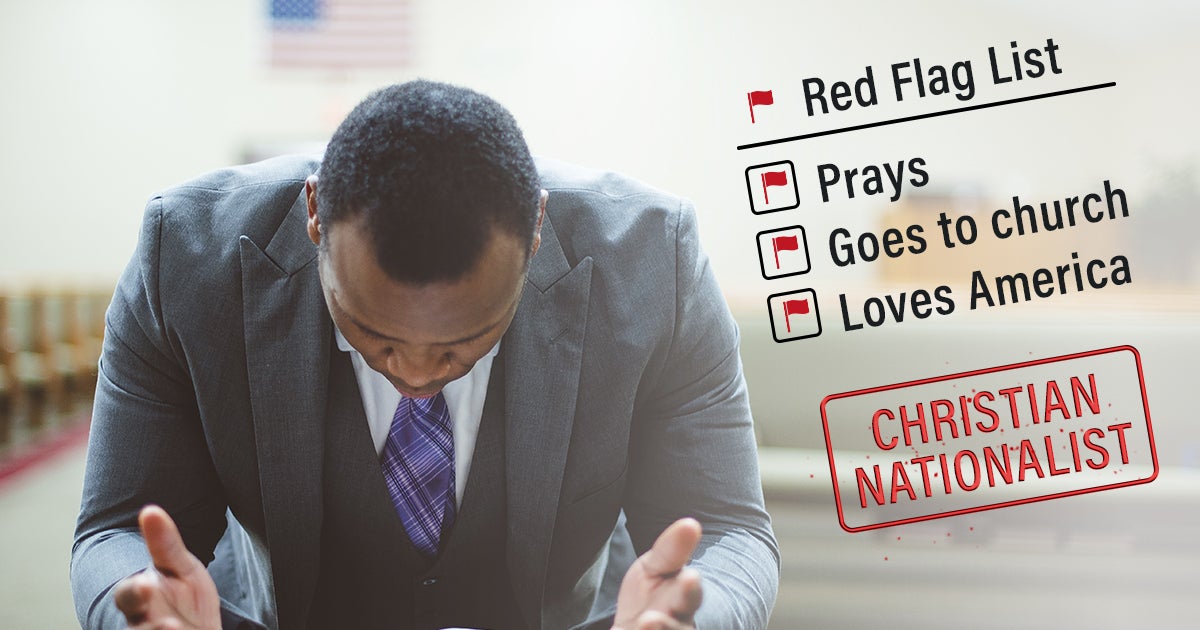 The label “Christian nationalist” is appearing more frequently and is being used to silence people of faith, according to experts.

Dr. Mark David Hall, an author and professor at George Fox University, recently discussed the history behind the term. He argues that the political Left started using it well over a decade ago “to label Christians who bring their faith into the public square for ends they don’t like.”

“What they did was they created a faux term ‘Christian nationalism,’ and they gave it all these negative attributes and then used that to attack Christians. It’s part of what you call an ‘intersectional line of attack’ in a political warfare model, which is the Maoist insurgency model, which we believe is the premier principal form of Marxism.”

Former congresswoman and current dean of the Regent University School of Government, Michele Bachmann, contends the surge in use is no coincidence, especially so close to a midterm election. She explains:

“It’s all about holding on to power. That’s what it’s about. There’s only one party in power now in the United States, in Washington, D.C. They don’t want to let it go…And what they have seen is the power of the Church, the epicenter of power in the United States. Opposing their agenda is the Church and the principles of the Bible. They don’t like pastors preaching on issues. They don’t like congregants being inspired from the Bible. And so that’s why we’re the target. They want to silence us.”

An Attack on Religious Liberty and America’s Founding Values

The use of the “Christian nationalist” label contradicts the principles and values of our country. Its perpetual misuse is especially harmful to religious liberty.

Among the many problems is how it demonizes public prayer and virtually any other commonplace religious activity. Whether a political leader or an everyday person, anytime there is a public expression of faith, the term is leveled against them as wanting to establish a Christian theocracy.

In other words, if a citizen exercises their constitutionally protected and inalienable right to religious freedom, that person runs the risk of being labeled a “Christian nationalist.” And once you carry that label, it essentially means you’re a pariah, someone who should be vilified and not allowed to participate in the marketplace or society.

This, of course, is nothing new. As Dr. Coughlin explained, this is a tactic straight out of the Marxist playbook. Whenever a political force wants to wield power and authority, religious people and religious liberty are the first ones on the target list.

Radicals and dictators know fully well that houses of worship and people of faith are the ultimate check on authoritarian power. Their allegiance is not to the government. A free people know their loyalty is to God above all, the true provider and source of our freedoms. If a tyrant succeeds at destroying religious freedom and religious institutions, they can remove the most effective challenge to their rule.

Vilifying the faithful is a timeless tool of authoritarians. Liberally tossing around the “Christian nationalist” label and slapping it on anyone who lives out their faith is a direct attack on religious freedom. Make no mistake. Radicals want to normalize the use of this loaded term to chip away and destroy one of the building blocks of our republic.

The political Left regularly screams “Christian nationalism” when a person of faith shows patriotism and pride in their country. If you say America was founded on Judeo-Christian principles, you’ll quickly be accused of trying to establish a theocracy. But that’s simply not true, and is based on a wildly distorted view of our nation’s history.

This use of “Christian nationalism” typically relies on a misguided understanding of the “separation of Church and State,” which radicals interpret to mean that there can be no intersection between religion and government. They claim that any religious expression or influence in the public square cannot be tolerated, because it would violate this strict wall of separation.

Understood in context, however, the “separation of Church and state” does not mean religious exercise or prayer is banned on government property. This phrase doesn’t even appear in the text of the Constitution. The original intent was never to keep religion locked inside the walls of a church or synagogue. Instead, it was to protect houses of worship and religious people from state intrusion and harassment. It’s misleading to argue that government and religion should never, under any circumstances, be mixed together.

Additionally, no matter how much secularists or the political Left deny it, the United States was, in fact, founded by people who valued biblical principles. From George Washington to Thomas Jefferson, James Madison, and other Founders, an overwhelming majority of them expressed belief in the Divine, a Creator who is the ultimate grantor of our rights and freedoms, as is clearly referenced in the Declaration of Independence. One of the foremost constitutional theorists of the founding generation, John Adams, observed, “Our Constitution was made only for a moral and religious People. It is wholly inadequate to the government of any other.”

America’s Founders were a prime example that faith and patriotism are not mutually exclusive. They demonstrated that it’s possible to serve God and be committed to the American constitutional experience—to the cause of liberty, human rights, representative democracy and the rule of law.

More than two centuries later, a strong majority of Americans still believe in this truth. Pew Research recently found 60% of Americans think the Founders originally intended the U.S. to be a “Christian nation.” However, 52% said the federal government should never declare an official religion. This shows that most people believe in the core principles of the First Amendment. That is, we can freely worship God while also cherishing our system of government.

Being a religious person who also loves their nation does not make one a “Christian nationalist.” Quite the opposite. Someone who serves God and country is embodying the best of America’s traditions. We’re a nation built on religious freedom, which means Christians—and people of any faith—do not have to be forced to choose between loving our republic and loving the One True God.