The Forgotten Triangle of Freedom?

Our system of government was supposed to be more than just laws. The character of its people plays a role that is impossible to ignore. 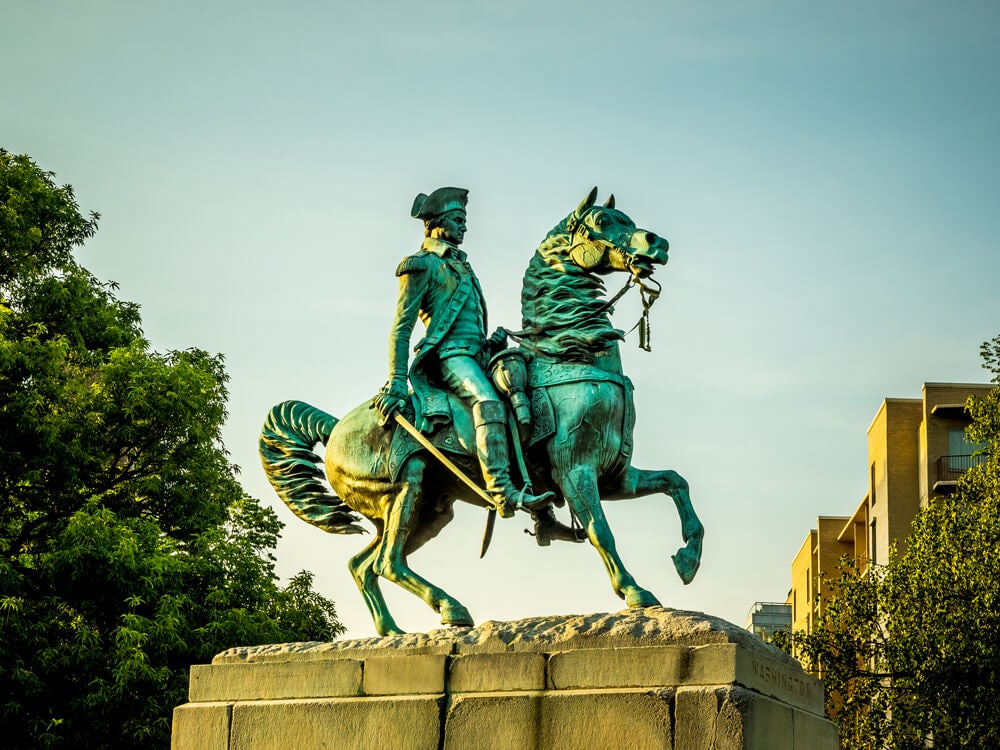 If you were asked what the most important moment in American history was, what do you think you would say? The Battle of Yorktown? The end of World War II?

There is a moment in our history that is largely overlooked by history teachers today: At the end of the American Revolution, the Continental Congress was in financial trouble. Many disgruntled revolutionary soldiers didn’t think they were going to be paid, and many began contemplating that this new country would be better off with a monarchy.

The title of “King” was first offered to General George Washington: “King George I of the United States.” However, without a second thought, Washington refused. They had just won a battle for freedom from an oppressive monarchy, and he was not about to return this new country into the hands of such a system.

Washington’s refusal astonished many. England’s King George III himself said that if Washington did not take the offer, “he would be the greatest man alive.”

Why didn’t Washington take this offer? Most men given such an opportunity would say yes. The difference between him and most men today is his character and the virtue that makes up his character.

When the Founding Fathers began writing the Constitution and forming a new system of government, many aspects of politics, philosophy, and human nature were taken into account. What emerged was our Constitution and its system of checks and balances.

However, built into the Founders’ vision was a compliment to the Constitution, a formula described later by scholar Os Guinness, in his book A Free People’s Suicide, as the Golden Triangle of Freedom: 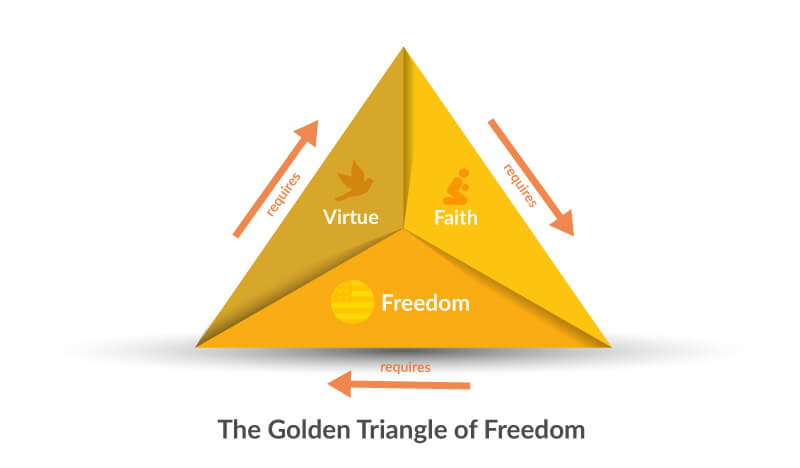 What happened since then? Over time, but especially accelerating during the 20th Century, the American legal system began to take a more secular approach to its functionality. “Virtue” and “Faith” began to wane. Where character, trust, and virtue had been prevalent, the importance of legal contracts took their place.

As Guinness wrote, “Legal contracts were strengthened and sharpened to take the place of weakening moral considerations such as character and trust.”

Liberty and freedom don’t “just happen.” History is largely a tale of tyranny. All men were created equal and have certain unalienable rights, as recognized in the Declaration of Independence. However, the freedom and liberty Americans experience comes from more than just laws and regulations. They come from the virtue of the citizenry.

Virtue is the only internal characteristic that supplies the self-restraint necessary to balance the risk to the social order of giving people a large amount of liberty.

The Founders were clear in their view that the virtue necessary to allow maximum liberty required a solid foundation: and that foundation was religion. Even the Founders with the least affinity to orthodox Christian views of their day believed this.

Benjamin Franklin made it very clear that he would never be a Christian, however, he stated that “as to Jesus of Nazareth, my opinion…I think the System of Morals and his Religion, as he left them to us, the best the World ever saw or is likely to see.” It was Franklin who initiated prayer during a crisis moment in the Constitutional Convention. It was Franklin who saw the immense cultural value of the work of his friend, the renowned evangelist George Whitfield.

And Thomas Jefferson, an alleged deist, stated, “The Christian religion is the best religion that has ever been given to man.” Many critics forget that men like Jefferson were no secularists; they clearly believed in God. Jefferson, as a statesman and as president, was clear that without faith there is very little reason to be virtuous. The Jefferson Memorial itself displays famous quotes by Jefferson connecting freedom to the moral laws of God.

Faith is voluntary in America. Americans may choose to believe or not to believe. We have the ability to exercise our faith without coercion, and participation is by choice.

As the Williamsburg Charter, a 1988 document on religious freedom signed by over 200 leaders from various backgrounds, stated:

“No longer can sword, purse, and sacred mantle be equated. Now, the government is barred from using religion’s mantle to become a confessional state, and from allowing religion to use the government’s sword and purse to become a coercing Church. In this new order, the freedom of the government from religious control and the freedom of religion from government control are a double guarantee of the protection of rights. No faith is preferred or prohibited, for where there is no state-definable orthodoxy, there can be no state-definable heresy.”

Yes, faith can flourish in totalitarian states. But the record of history demonstrates that lowering the walls to faith often allows an expansion and all the benefits of a public tolerance of open religious practice.

WHY IS THIS NECESSARY?

In many of the writings of the Founders, the importance of character and faith are heavily discussed. They understood that the system they designed was best for self-government by a virtuous citizenry. The checks and balances created by the Constitution are to be complemented with leaders of high virtue and character, those who can be trusted to place the importance of the people ahead of their personal gain.

Today, the character and virtue of both average citizens and leaders are being more and more privatized, just as religion is. Many believe that whatever a person believes, and how they behave, the decision is private with little consequence beyond that individual.

Is it any surprise, then, that religious liberty has come under growing hostility? If virtue requires faith, and virtue is devalued, then it follows that faith—and the freedom to express that faith—will also be devalued.

And is it any surprise that such a system will also begin to value competence over character in leadership—whether public or in business—a dangerous choice? Leaders need skills and abilities necessary to do well in leading our country; however, the Founders believed that character should be equally, if not more, important.

The Founders believed that liberty and freedom could be maintained through the system they designed. However, without the influence of virtue and faith—all of which are enhanced by religious freedom—how long can the Golden Triangle of Freedom, and freedom itself, be maintained?

Radical groups are on the prowl looking for ways to suppress religious expression throughout America.

Contact First Liberty for immediate help if your religious speech has been censored or attacked.