The following article is taken in part from our new Religious Liberty Protection Kit for the U.S. Military. For the full, free, online version, click here. 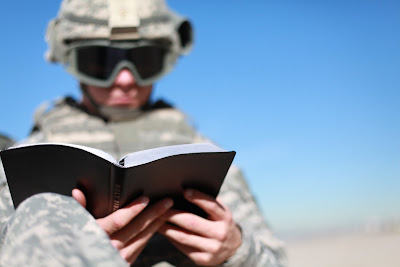 Religious liberty in the U.S. military is under fire from politically correct government officials and radical legal organizations. Recently, we were asked by Members of Congress to provide legal and historical analysis in light of the argument that service members must leave their religious freedom rights at the base gate. Our answer was an emphatic, “No, they keep their rights.”

This answer is not just important for Congress and courts to hear. It is crucial that men and women in the military—or those who may be thinking of serving in the military—know the strong legal basis for their right to openly live and express their faith while in uniform.

Here is a brief summary of the legal and historical analysis supporting our claim that members of the military do not forfeit their religious liberty:

I. AMERICANS HAVE MORE RELIGIOUS FREEDOM THAN WE THINK

Despite serious attacks on religious expression, the American legal basis for religious liberty is strong and has withstood many challenges. Usually, we lose when we fail to stand up for our rights. When we do stand up, we win. Consider:

The U.S. Constitution itself is pro-religious freedom. The First Amendment outlaws government interference with the “free exercise” of religion.In 1789, Congress passed a law providing for the payment of legislative chaplains.

One hundred and ninety-four years later, in Marsh v. Chambers (1983), the Supreme Court upheld the payment of legislative chaplains, concluding that it “is not . . . an establishment of religion,” but rather “a tolerable acknowledgement of beliefs widely held among the people of this country.”

In Zorach v. Clausen (1952), the Supreme Court acknowledged, “we are a religious people whose institutions presuppose a Supreme Being” and that the First Amendment “does not say that in every and all respects there shall be a separation of Church and State. . . .Otherwise the state and religion would be aliens to each other—hostile, suspicious, and even unfriendly.’”

In Corporation of Presiding Bishop v. Amos (1987), the Supreme Court stated “this Court has long recognized that the government may (and sometimes must) accommodate religious practicesand that it may do so without violating the Establishment Clause.”

In Westside Board of Education v. Mergens (1990), the Supreme Court held that the Government “does not endorse or support . . . speech that it merely permits on a nondiscriminatory basis.” In other words, permitting religious speech is not establishing religion.

In Rosenberger v. Rector (1995), the Supreme Court stated: “private religious expression receives preferential treatment under the Free Exercise Clause,” and warned that “discrimination against speech because of its message is presumed to be unconstitutional.”In other words, don’t suppress private religious expression even in public places! The Rosenberger decision said this is unconstitutional “viewpoint discrimination,” which includes unreasonable restrictions on “proselytizing . . . or even acts of worship.”

In Van Orden v. Perry (2005), the Supreme Court held that a Ten Commandments monument on public grounds did not violate the Establishment Clause, noting that “people may take offense at all manner of religious as well as nonreligious messages, but offense alone does not in every case show a violation.”

In Salazar v. Buono (2010), the Supreme Court held that a memorial cross in a public park to honor WWI veterans did not violate the Establishment Clause.

In Town of Greece v. Galloway (2014), the Supreme Court held that allowing government officials to open their meetings with prayer does not violate the Establishment Clause.  Echoing the Van Orden decision, the Court stated “offense . . .does not equate to coercion.”

Many secularists might read Point 1 and exclaim, “But wait! That doesn’t apply to the military! The military is different. It has its own system of laws, and as an arm of the government must be sterilized of all religious influence!” This is incorrect. It’s a scare tactic aimed at frightening people of faith in the military into silence. So let’s look at actual military law.

President Thomas Jefferson—often described as a strong church-state separatist—signed the Articles of War (the precursor to the Uniform Code of Military Justice) which “earnestly recommended to all officers and soldiers, diligently to attend divine services.” In 1791, Congress passed the Military Establishment Act, which included the creation of the U.S. Army chaplaincy.

In 1799, Congress required commanders of U.S. Navy ships “to take care that divine service be performed twice a day, and the sermon preached on Sundays.”

In 1800, Congress encouraged U.S. Navy ships’ crews “to attend at every performance of the worship of Almighty God.”

To this day, the U.S. Navy maintains the tradition of saying a daily prayer aboard each vessel.

In 1950, a report to President Harry Truman stated:

“[I]f we expect our Armed Forces to be physically prepared, we must also expect them to be ideologically prepared. A program of adequate religious opportunities for service personnel provides an essential way for strengthening their fundamental beliefs in democracy and, therefore, strengthening their effectiveness as an instrument of our democratic form of government.”

In 1955, President Dwight Eisenhower signed Executive Order 10631, prescribing the Code of Conduct for Members of the Armed Forces. Article VI concludes: “I will never forget that I am an American, fighting for freedom, responsible for my actions, and dedicated to the principles that made my country free. I will trust in my God and in the United States of America.”

The Free Exercise clause of the First Amendment to the Constitution of the United States applies to members of the military.

The 1993 Religious Freedom Restoration Act (RFRA)applies to military service members to the same degree that it does to civilians. In order to be lawful, a statute or regulation that burdens a service member’s religious expression must demonstrate that it: (1) furthers a compelling governmental interest; and (2) uses the least restrictive means to further the interest.

This important regulation states that the Department of Defense “places a high value on the rights of members of the Military Services to observe the tenets of their respective religions.”

It specifies and therefore restricts the circumstances that give a commander the authority to deny religious accommodation.

DoD Directive 1304.19, Appointment of Chaplains for Military Departments (2004) states that commanders are required to provide comprehensive religious support to service members. Chaplaincies are established to assist commanders in carrying out this responsibility.

Air Force Instruction 1-1 (November 12, 2014) states that as a government entity, the U.S. Air Force must allow free exercise of religion of its members, with the reasonable caution that superior officers must not appear to seem biased for or against those under their command because of religious beliefs.

This regulation also states: “Supporting the right of free exercise of religion relates directly to the Air Force core values and the ability to maintain an effective team. All Airmen are able to choose to practice their particular religion, or subscribe to no religious belief at all. You should confidently practice your own beliefs while respecting others whose viewpoints differ from your own.”

United States Army Regulation 600-20 (March 18, 2008) states that: “The Army places a high value on the rights of its soldiers to observe tenets of their respective religious faiths.”

The only restrictions are those that reasonably apply to any religious activity that would overtly impair military functions and readiness.

Secretary of the Navy Instruction 1730.8B (October 2, 2008) states: “Department of the Navy policy is to accommodate the doctrinal or traditional observances of the religious faith practiced by individual members . . .”

Again, the only restriction allowed is when religious activity to overtly impair necessary military functions.

United States Coast Guard Commandant Instruction M1730.4B (August 30, 1994) states: “In keeping with the provisions of Coast Guard policy, unit commanding officers shall provide for the free exercise of religion for Coast Guard personnel, their dependents, and other authorized persons, and seek to accommodate the religious practices and observances of individual members when they will not have an adverse impact on military readiness, unit cohesion, health, safety or discipline.”

Some may object that in our “enlightened” age, the courts are striking down such pro-religion policies as violating the First Amendment by breaching the so-called “separation between church and state.” However, much the opposite turns out to be the case. For example:

In 2010, a U.S. District Court upheld the right of a civilian employee at Marine Corps Base Camp Lejeune, North Carolina to put decals on his car that included some carrying an overtly religious message. Even though some base personnel alleged the decals could be offensive, the Court ruled that the base commander engaged in “viewpoint discrimination” by permitting non-religious decals but banning those with a religious message, and ruled in favor of the religious rights of the base employee.

In 1997, a U.S. District Court ruled that Roman Catholic military chaplains could encourage their military parishioners to contact legislators regarding proposed laws they deemed of utmost spiritual importance. The military sought to prohibit the chaplains from engaging in such political activity, but the Court ruled for the chaplains, stating when chaplains “are acting in a religious capacity…it is wholly appropriate for them to advance their religious beliefs in that context.”

In 1985, a U.S. Court of Appeals rejected the claim that a government-funded chaplaincy violates the First Amendment’s Establishment Clause. In fact, the Court ruled that the Constitution “obligates Congress, upon creating an Army, to make religion availableto soldiers who have been moved by the Army to areas of the world where religion of their own denominations is not available to them.”

Amid the bluster of those who take aim at religious freedom in the military, it’s easy to get the misimpression that such freedom doesn’t exist, is vanishing, or can’t be reclaimed. The bluster is wrong. As we’ve seen, we have every reason to confidently assert our constitutional religious rights as applied to the armed services. Religious liberty is a military necessity.

Liberty Institute has successfully defended active service members, veterans and veterans memorials in the past, including

Click on the links above to read about these victories, and access our free, downloadable Religious Liberty Protection Kit for the U.S. Military here.