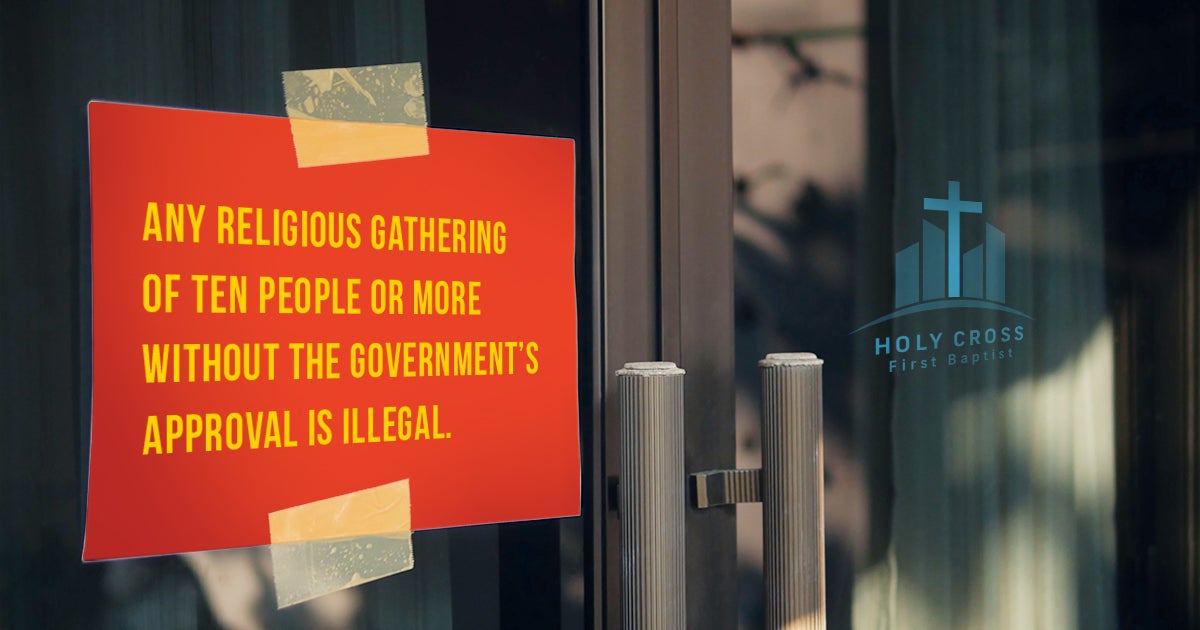 A scan of current headlines reveals a chilling trend: An aggressive assault on religious liberty happening worldwide, from totalitarian nations to beacons of freedom, including the United States.

Recent news reports show how China’s authoritarian government has stepped up its control of houses of worship. In fact, Chinese officials’ grip on internet censorship has reached such an unprecedented level that even government-approved Christian groups have had to resort to using abbreviated initials “JC” to replace the Chinese characters for “Christ” or “Jesus” in certain publications.

Americans must pay close attention and learn some important lessons from China’s recent censorship blitz, particularly about being vigilant of the growing religious intolerance in our own country and the resemblances to the violations that occur in oppressive regimes.

As our nation faces a crisis that threatens the fabric of the Constitution, it’s clearer now more than ever before why the battle for religious freedom is the most essential fight of our lifetime.

As history has shown us, once government takes control of the church and religious communities, it’s not long after that all other civil, political and even economic freedoms are also taken away.

The government overreach that has surfaced in the United States since the beginning of the pandemic shares some concerning similarities to totalitarian crackdowns in China. Consider the following:

That’s just one raid in a recent crusade by the CCP to destroy unregistered religious (mainly Christian) venues, harassing and arresting believers, as well as imposing hefty fines on them.

While the “Land of the Free” is still far away from total tyranny, violations of religious liberty are added to the list with each passing day, some of which we never thought would happen in a nation founded as a religious safe haven.

For example, police arrested multiple people in the city of Moscow because they gathered for a an outdoor event at a local church. By the way, that’s not Moscow, Russia. It’s Moscow, Idaho, a Midwestern American city with a population of less than 30,000.

In reference to California Governor Gavin Newsom’s order that prohibited singing in houses of worship across the Golden State, Rachel Stormend, the worship leader of Destiny Church in Rocklin, CA, recently shared in an exclusive interview in FLI Live!:

“I never thought singing and worshipping God in song would be the most controversial decision I’d make in my life.”

What’s more, Los Angeles County officials threatened to evict Grace Community Church Pastor John MacArthur from the large parking lot that his church has used since 1975. That was on top of threatening him with arrest and fines if he did not comply with local and state restrictions on church services.

For many churches and religious leaders, threats have materialized into what appear to be forms of punishment for living out their faith.

Of course, we can’t forget when police officers in Greenville, MS told a local pastor that he couldn’t host drive-in church services during Easter weekend because his constitutional rights were “suspended.”

Let’s step back for a moment and think about this: Pastors threatened with arrest, churches punished with crippling fines and evictions, the threat of state task forces and government meddling in the church’s business, to the point that the state tells worship leaders they can’t sing together with their congregations.

Does this sound like America, the world’s beacon of freedom and a nation built upon the bedrock principle of the free exercise of religion?

For the millions of people of faith who cherish the right to worship freely, we cannot become complacent in fighting for our First Freedom, especially given the last nine months of church lockdowns and government officials abusing their constitutional authority.

First Liberty needs your ongoing support in the most essential fight of our lifetimes. Together, we can put a stop to the assaults that threaten to strip away our religious freedom and our First Amendment rights as Americans.