The Northwest Ordinance: A Turning Point for Freedom in America 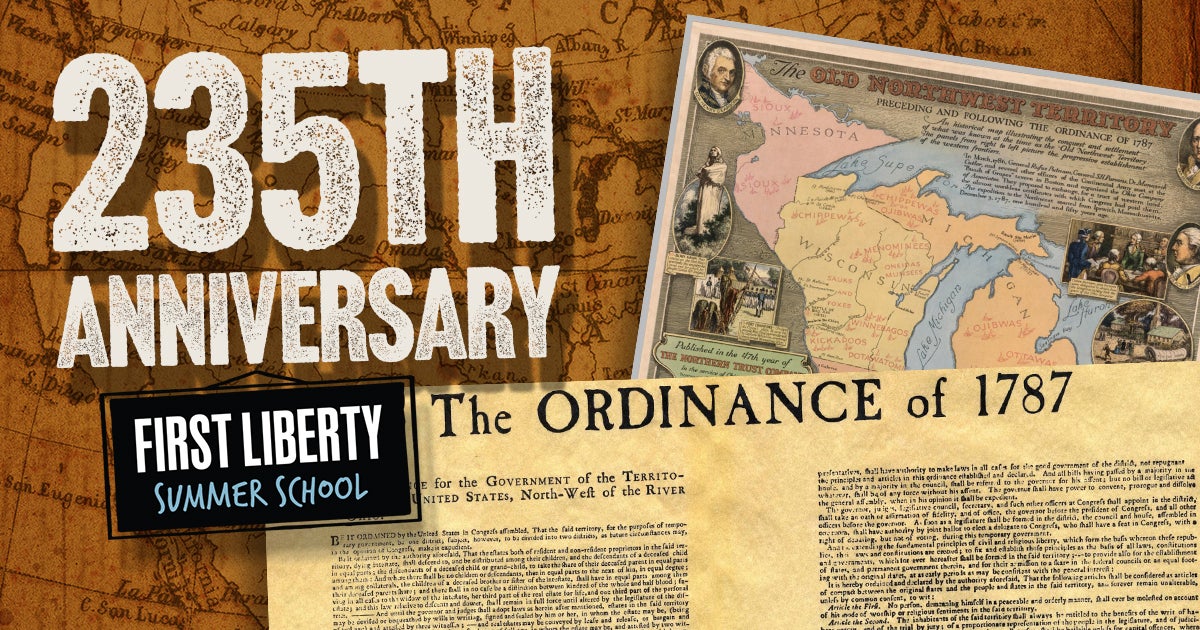 July 13th is a special day in American history. This year, it marked the 235th anniversary of the passage of the Northwest Ordinance, one of the most important documents of the Founding Era. It would serve as a building block of freedom in our country.

What is the Northwest Ordinance?

After the end of the Revolutionary War in 1783, the United States laid claim to lands stretching from the Ohio River west to the Mississippi and north to the Great Lakes—an expansion known as the Northwest Territory. Several states claimed this land but gave up those claims when the Articles of Confederation—the precursor to the U.S. Constitution—were ratified.

In 1784, Thomas Jefferson put forward a plan to organize this territory into states. The Northwest Ordinance chartered a government, provided a method for admitting states and listed a bill of rights guaranteed in the territory. The Confederation Congress passed it on July 13th, 1787.

Why Was It So Significant?

The Northwest Ordinance helped set the stage for the Constitution, which would be ratified only a couple of years later (1789). It mentioned a series of rights related to criminal procedure, political equality and the protection of private property. It would also follow through on the promise outlined in the Declaration of Independence that “all men are created equal.” Importantly, it outlawed slavery in the states to be formed out of the Northwest Territory.

Remember, the First Amendment did not exist at the time the Northwest Ordinance was passed. The Bill of Rights—the first 10 amendments to the Constitution—was not adopted until 1791.

The Northwest Ordinance was a vital document that influenced what would later become the First Amendment. Together with other landmark pieces of legislation, such as the Virginia Statute for Religious Freedom, it helped shape constitutional religious liberty protections. Without these documents, one wonders: would America still have religious liberty as we know it today?

Sec. 13. And, for extending the fundamental principles of civil and religious liberty, which form the basis whereon these republics, their laws and constitutions are erected; to fix and establish those principles as the basis of all laws, constitutions, and governments, which forever hereafter shall be formed in the said territory.

Another provision required religious toleration. It stated that no one should be harassed or punished because of their religious beliefs:

Art. 1. No person, demeaning himself in a peaceable and orderly manner, shall ever be molested on account of his mode of worship or religious sentiments, in the said territory.

Although it’s not the exact same phrasing, it evokes the same principle underpinning the First Amendment: the government should not discriminate or act against someone simply because of their faith.

The Ordinance also mentioned religion as a vital component to ensure our fledgling republic could flourish:

Art. 3. Religion, morality, and knowledge, being necessary to good government and the happiness of mankind, schools and the means of education shall forever be encouraged.

This resembles a famous quote from John Adams, one of the foremost constitutional theorists of the founding generation. In a letter written in 1798, years after the Northwest Ordinance passed, Adams wrote:

“Our Constitution was made only for a moral and religious people. It is wholly inadequate to the government of any other.”

Did these statements suggest America was to be a theocracy? Of course not. The Founders experienced first-hand the oppressive dictates and religious intolerance of the British Crown, which led to the American Revolution and the pursuit of independence. It’s why they drafted the First Amendment to ensure the government could not establish a national church.

The Founders, however, understood that the laws and constitutional freedoms of the new republic were founded on this principle: our rights are granted by God, not government. They intended religion, education and morality to work together among the people to guarantee good government and liberty. Without religion, morality, virtue and knowledge, free citizens would not be able to govern themselves. They would instead quickly cede or lose their rights. The success of a free nation depended on a virtuous people. Only they could courageously defend the rights endowed by their Creator.

The Northwest Ordinance is one of the “Organic Laws of the United States of America.” Together with the Declaration of Independence, Articles of Confederation and the U.S. Constitution, it is a pillar on which our country was built.

Many today will attempt to censor, cancel, rewrite or even erase parts of our history. They claim America’s Founding documents are outdated relics. But one thing is clear: without documents like the Northwest Ordinance, we would not have the freedoms we cherish today. The principles and values we find in them are timeless—and for that reason, they should be taught, remembered and celebrated.