Top 20 Cities Where Americans Pray, Read Scripture and Attend Church the Most 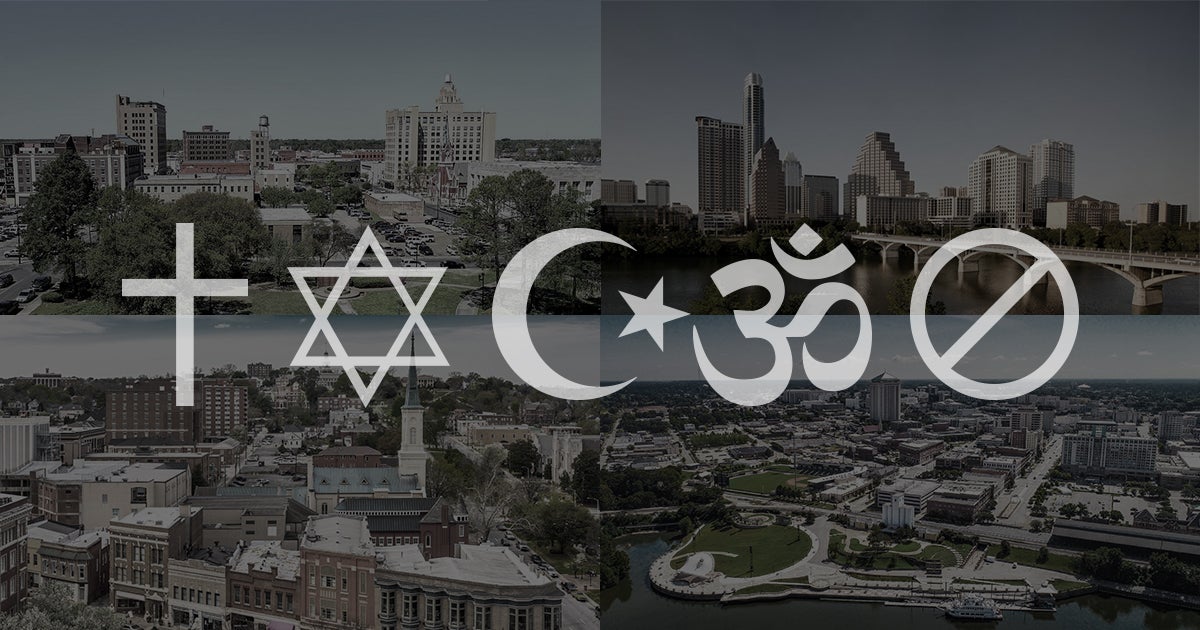 In the 1600’s, the first settlers fled persecution in England searching for liberty—specifically the liberty to live out their faith without the oppression of the state.

Before landing on the shores of the New World, the Puritan leader John Winthrop delivered a speech to his fellow voyagers, reminding them of their common purpose: To be a “city upon a hill,” a place the world would see as an example of freedom.

Today, and throughout America’s history, that famous phrase remains the core of who we are as a country: The world’s beacon of hope, where people of all faiths can freely live out their beliefs, and where government cannot force them to violate their conscience.

Looking back on Winthrop’s wise words, it’s probably no coincidence that he used the term “city” to describe the American colony he’d soon establish.

Because while most of us often tend to think of religious freedom as a national treasure, it’s in cities—in communities, towns, villages and neighborhoods—where Americans like YOU live out your faith daily. It’s in your local house of worship, school, workplace, business, nonprofit charity, sports stadium, or public park where the free exercise of religion becomes reality.

So, in the spirit of honoring cities as a key heartbeat of religious life, we’ve compiled a list of top American cities that are the most religious, based on weekly scripture reading, prayer and church attendance.

So, how religious is your city? Check out the charts below!

According to data from Barna Research, an average of three (3) in ten (10) adults in the U.S read the Bible at least once a week. The graph below shows a list of the top twenty cities where Americas are reading scripture significantly above the national average—in some cases twice as much!

Notably, cities with high scripture readership tended to be further south in states like Louisiana, Alabama, Texas, Mississippi and Georgia. 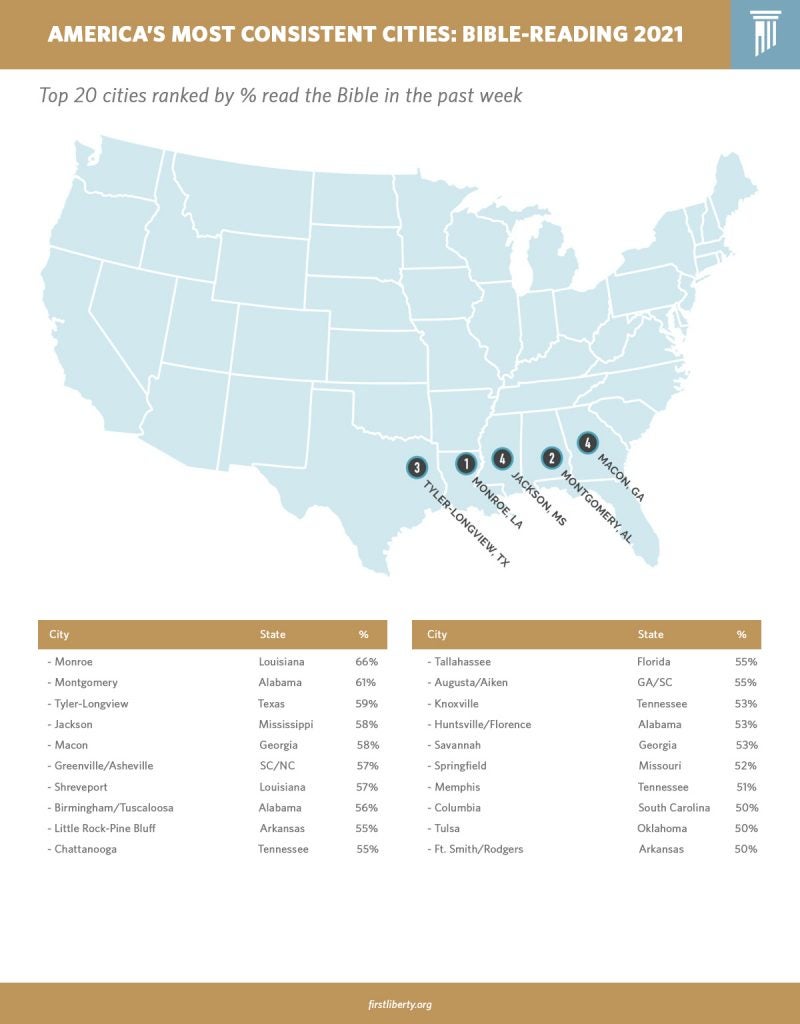 Barna Research reports that sixty-four percent (64%) of Americans participate in prayer at least once a week. That statistic is more than double compared to the national average for Bible readership.

Although prayer has reportedly decreased in recent years, the following list of top twenty (20) cities shows that Americans are still actively living out their faith through prayer. 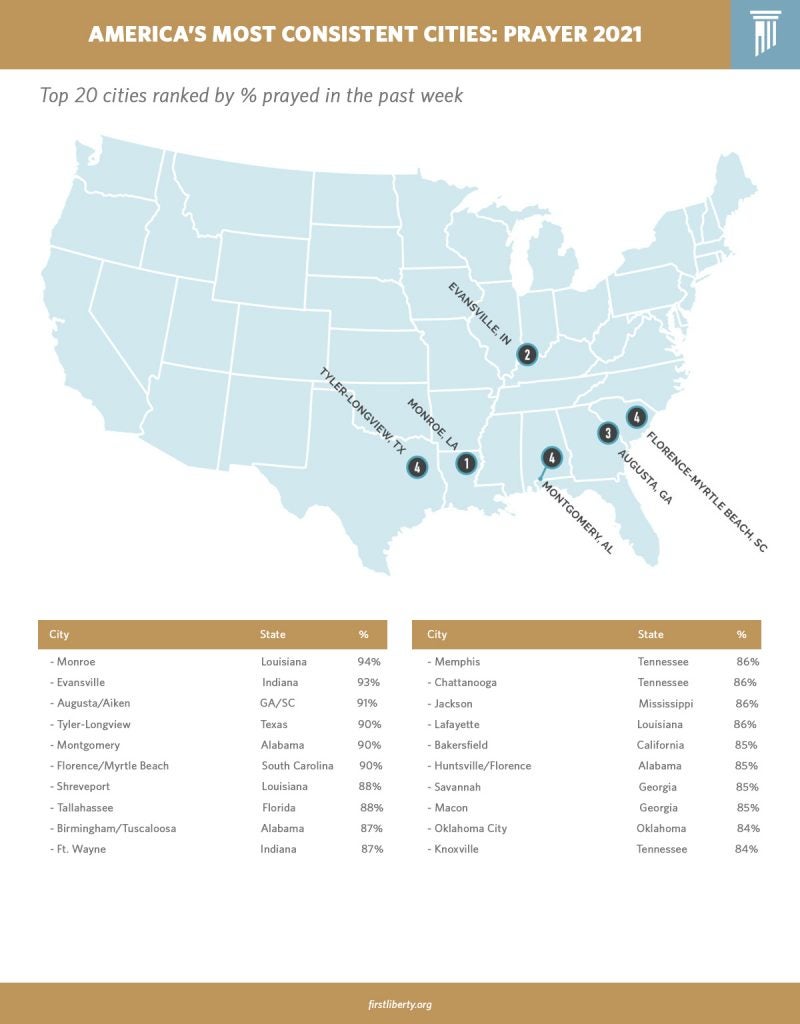 Barna Research notes church attendance as another important indicator of how active Americans are in their faith. The graph below lists the top twenty (20) cities measured by the percentage of people who’ve attended a church service in the last week.

Interestingly, cities in states such as Utah, Illinois, Indiana, Kansas, and Arizona scored notably better on this survey compared to the Southern cities that ranked near the top in the previous two categories. 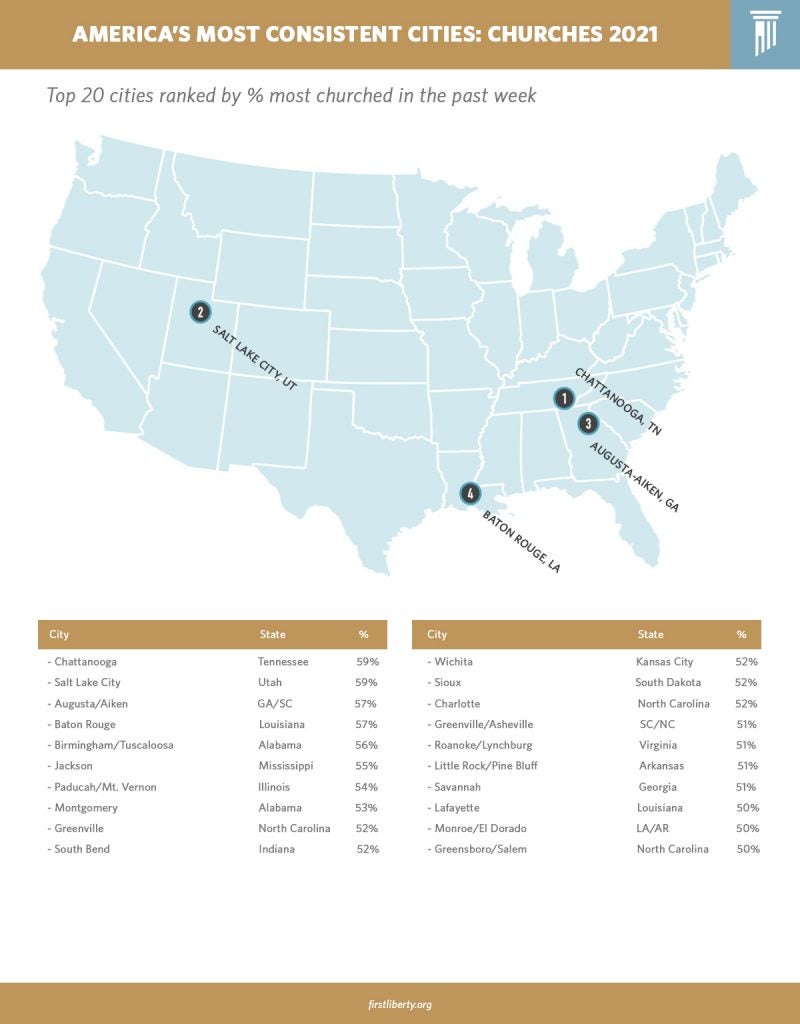 What is considered a constitutional right in America is regarded as a crime or a punishable offense in many countries. For millions of people around the world, attending a house of worship, praying and even owning a Bible isn’t a right—but a privilege.

America is an exceptional place not only because the Constitution says we are a nation committed to protecting religious freedom. We have stood out as a shining city on a hill because we are nation of people who exercise that cherished, constitutional right.

America can keep being the world’s beacon of freedom, and it starts with us actively living out our faith and enjoying the “blessings of liberty” bestowed to us by our Founders, including the liberty of going to church, praying or reading scripture.