First Liberty steps in to represent Livingston Christian School in its appeal to a federal court. The school’s existence in its town is at risk.

It should be a simple decision.

A Christian school is doing good work preparing children to be productive citizens in its town. The school’s former facility is no longer viable so it finds a new home in a church. This is vital, because the school may not have any other option for its needs in that town. Then the local zoning board recommends approving the zoning permit necessary for the move. The local community supports it. Town experts support it.

But the town council denies the application, effectively threatening the school’s right to exist as a ministry in the town—and putting children’s religious education at risk.

These disturbing events are exactly why First Liberty Institute has stepped in to fight for Livingston Christian School in Genoa Township, Michigan. The battle is now at the U.S. Court of Appeals for the Sixth Circuit, one level below the U.S. Supreme Court. 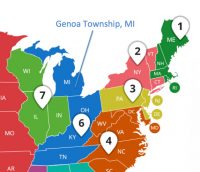 “The government is refusing to allow a Christian school to move into a building on church property or, for that matter, anywhere else in town,” Hiram Sasser, Deputy Chief Counsel for First Liberty Institute, says. “That’s wrong. Federal law expressly prohibits the government using zoning laws to keep religious institutions out of their town.”

FORCING A RELIGIOUS SCHOOL OUT OF TOWN

What went wrong? Here is the story:

For nine years, Livingston Christian School (LCS) operated its school in the Village of Pinckney, Michigan. In 2014, the school sought a new, larger location more centrally located to their students.

They found only one viable option. LCS entered into an agreement with Brighton Church of the Nazarene to lease one of its buildings to house the school. In March 2015, Brighton Church, on behalf of LCS, submitted an application to amend its existing special use land permit to allow the school to use the church’s building as a religious school.

But, on July 20, 2015, the Township Board denied the application without explanation, preventing LCS from operating at the church or anywhere within Genoa Township!

A few weeks later, the Board explained the denial was due to concerns the school would overburden the public infrastructure and would not promote “harmonious and organized development consistent with adjacent land uses.” This denial came despite the opposite conclusions of consultants, the planning commission, the community development director, and town residents.

THE SCHOOL GOES TO FEDERAL COURT

The school sued Genoa Township in federal court. Incredibly, the federal district court ruled that the school’s religious liberty had not been “substantially burdened” by the town’s decision.

First Liberty and its volunteer attorneys from Covington & Burling, LLP filed a brief appealing the district court’s decision to the U.S. Court of Appeals for the Sixth Circuit.

They sued the Township under the Religious Land Use and Institutionalized Persons Act (RLUIPA) arguing that the Township’s actions substantially burdened the school’s ability to operate as a religious ministry.

Yet the federal district court ruled against the school on the grounds that the Township’s actions did not constitute such a burden, and therefore did not violate RLUIPA.

THE STAKES ARE HIGH—FOR CHILDREN AND FREEDOM

“First Liberty has won multiple cases using RLUIPA,” said Sasser. “We know this law well. In fact, we won a landmark case, Opulent Life Church v. Holly Springs, in the 5th Federal Circuit Court when a town used zoning regulations against a religious institution. We lost at the district court, but won at the federal appeals court. We hope for the same outcome in this important case.”

And it is, indeed, important.

At stake: Children’s education. Religious influence in an entire community. And a precedent over the application of RLUIPA that could either create a chilling precedent against ministries, or keep open the doors of such institutions by protecting their existence against discriminatory zoning laws.

Will this Christian school be allowed in a church building? Stay tuned as the appeal commences.