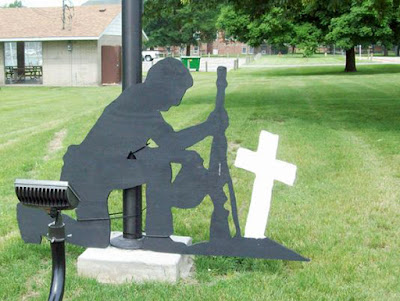 In the wake of the recent Mt. Soledad Veterans Memorial victory and the ongoing battle for the Bladensburg WWI Veterans Memorial in Maryland, yet another veterans memorial is being attacked—this time in the small town of Knoxville, Iowa.

The memorial in question isn’t particularly elaborate. Made of plywood and strapped to a flag poll, the memorial depicts the silhouette of a soldier and his rifle, kneeling with head bowed before a small cross-shaped grave marker of a fallen comrade in arms.

It was hand-carved by 67-year-old Vietnam War veteran and Purple Heart recipient Al Larsen, who donated the memorial to the local American Veterans (AMVETS) Post 63. The AMVETS group placed the memorial in Knoxville’s Young’s Park just months ago to honor fallen veterans—including Larsen’s best friend who died serving in Vietnam.  Identical veterans memorials were already on display outside the local VFW and American Legion posts.

Larsen carved many of these memorials as a hobby. The cross-shaped grave marker is meant to represent the thousands of similar grave markers commemorating fallen American soldiers in American military cemeteries around the world.The depiction is of a cutout soldier kneeling to mourn the loss of a fellow warrior.

“This memorial represents me and my best friend,” Larsen said. “That’s me kneeling at his grave. He was killed November 17 and I got shot November 18. This is my memorial to him and his sacrifice. I want it to stay up for him.”

But Americans United for Separation of Church State won’t take that for an answer. The group sent a letter to the City of Knoxville on August 17, demanding the memorial’s removal, claiming that it was unconstitutional because it contained a cross and sat in a city park. The letter was met with no small amount of opposition.

On August 30, a crowd of several thousand, including hundreds of veterans, gathered in Young’s Park to show their support for the memorial.

Knoxville, population 7,300, is home to branches of the American Legion, VFW, and AMVETS. The town runs rampant with support for the military—and the contested memorial.

Even city officials were caught off-guard by The Americans United for Separation of Church and State’s demands.

“It only makes sense [for the memorial] to go there,” Hatch told the Des Moines Register. “The whole entire area there is only for one purpose, and that’s to honor veterans.”

In light of the overflow of support for Larsen’s memorial—including verbal support from presidential candidates like Ted Cruz and Bobby Jindal—the City Council decided last Tuesday to try to keep the memorial right where it is.

Currently, the City of Knoxville is investigating the possibility of a land transfer, which would allow the memorial to stay in its original location, the only difference being private versus government ownership of the land in question. No matter what, Liberty Institute has publically committed to representing the memorial’s creator Al Larsen in the defense of the memorial. Read Liberty Institute’s press release announcing our legal representation of memorial creator and veteran Al Larsen.

Though the attacks on veterans memorials in America seem to never cease, neither does Liberty Institute’s defense of those memorials. Veterans memorials that use images or text which can also have a religious meaning are lawful. The U.S Supreme Court, discussing the Mojave Desert Veterans Memorial, which uses a cross shape, said a cross used as a veterans memorial “evokes thousands of small crosses in foreign fields marking the graves of Americans who fell in battles.” Claiming otherwise and trying to tear them down is an affront to the men and women they are meant to honor.

Just this year, Liberty Institute successfully defended one longstanding and much beloved national veterans memorial, and is working toward victory in defense of another:

Liberty Institute is committed to defending the Knoxville veterans memorial just as we have defended many others in the past. Our veterans fought for the freedoms we enjoy—including religious liberty. It is our job to fight for the right to honor their memory with veterans memorials.

“Knoxville veterans created this memorial, paid for this memorial, and erected this memorial,” said Roger Byron, Liberty Institute Senior Counsel. “This monument is their private speech honoring their friends who died in battle. The fact that anyone would attack these veterans and their memorial is shameful.”