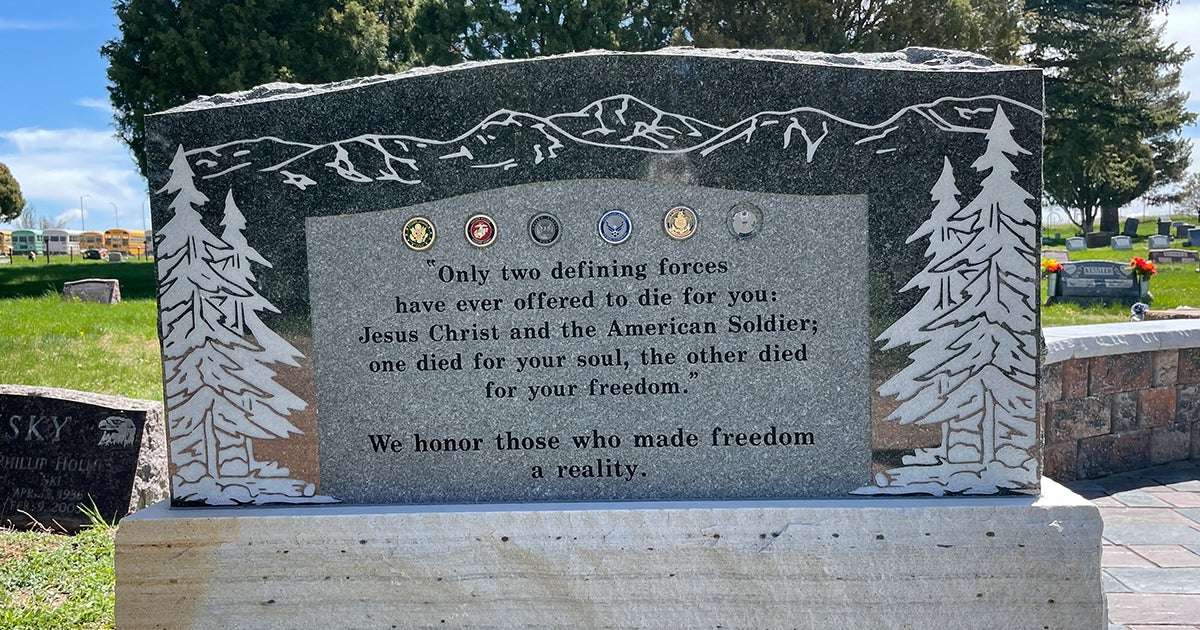 Sixteen year-old Michael Carlson had one goal with his Eagle Scout project: to honor American veterans. For nearly two years, he labored to plan, raised private funds for, and build a veterans memorial in his hometown of Monument, CO.

When Michael presented the completed project to the town in October of 2020, he called it a “dream come true.”

The memorial sits in the town cemetery and includes a crescent stonewall, recognition of the private donors who funded the project, a “battlefield cross,” and a headstone sporting the insignias of six military branches, as well as the following statement:

Only two defining forces have ever offered to die for you, Jesus Christ and the American soldier. One died for your soul, the other died for your freedom. We honor those who made freedom a reality.

Sadly, that statement has made Michael’s Eagle Scout project the target of an outrageous attack from the usual suspects known for creating problems where they don’t exist: the deceptively named Military Religious Freedom Foundation (MRFF).

Despite claiming that he was not directing an attack against the young Eagle Scout or questioning his intentions, MRFF founder Mikey Weinstein called the project a “wretched, unconstitutional dumpster fire.”

Watch the video below. First Liberty Live! host Stuart Shepard and attorney Stephanie Taub give you an Insider’s look and exclusive tour of the monument. They also explain why the memorial is constitutional and should be kept intact, despite the MRFF’s complaints:

MRFF threatened to sue the town of Monument, claiming that because the memorial’s headstone referenced Christianity, it amounted to a violation of the First Amendment’s Establishment Clause, or government’s promotion of one religion over others.

Remember, however, the memorial was privately funded and planned by Michael’s own efforts. That means the headstone inscription referencing Michael’s religious beliefs is private religious speech. The religious reference in no way suggests that the government is discriminating, excluding, or failing to honor military veterans of all faiths—or those of no faith—for their sacrifice. Also, while located in the town cemetery, Michael’s family purchased the plots where the memorial sits, ensuring that the town does not own the memorial and is not responsible for its maintenance.

First Liberty quickly jumped to the defense of Michael and the town of Monument, demanding an apology from Weinstein—an apology yet to be given.

“Your attack on a minor who simply intended to honor our veterans is profoundly disrespectful to all involved,” wrote Stephanie Taub, First Liberty Counsel in a recent letter to MRFF.

“The Eagle Scout intended to use his voice to honor all the brave men and women who have served in our armed forces. The memorial he created is privately designed, privately maintained and located on private burial plots in Monument Cemetery.”

Whether it’s individual service members or veterans memorials that frequently come under attack from MRFF and other hostile organizations, First Liberty is committed to being the one that jumps to the defense of our nation’s brave heroes and those who are trying to honor them.

You’re the Force Multiplier who helps replenish First Liberty’s legal arsenal, and with your continued financial support, we can keep securing crucial legal victories for memorials like the one built by Eagle Scout Michael Carlson in Monument, CO.

This Memorial Day, will you be the one to join us in standing for veterans memorials around the nation?