After appealing to the Trump Administration, First Liberty secures victory for Texas and Florida churches impacted by 2017 hurricanes. 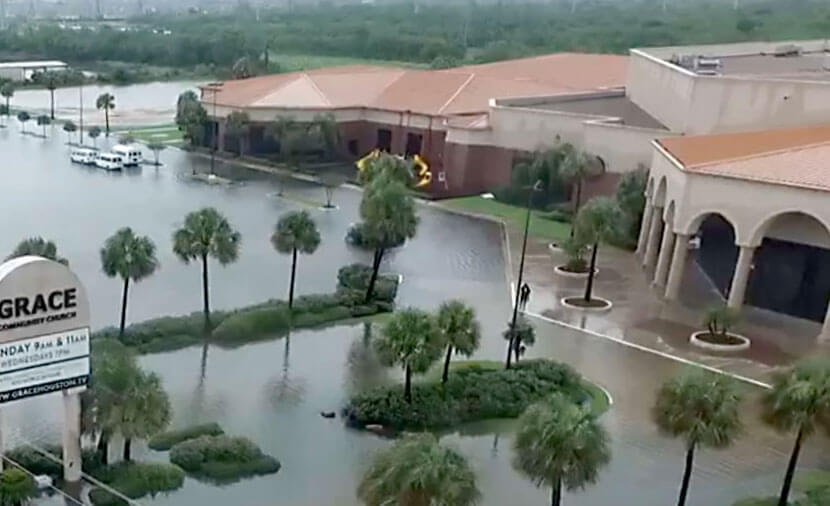 They have not been forgotten. Months after being ravaged by Hurricanes Harvey and Irma, First Liberty clients Trinity Church, Church on the Rock Katy and Grace Community Church – and hundreds of other affected houses of worship – are starting the New Year with hope and optimism.

On January 2, the White House announced that it would end a religious ban on entities like churches, synagogues, mosques, and temples in hurricane-affected areas and allow them to apply for FEMA relief, consistent with federal law.

“The announcement by the White House allows our clients to continue to be the bedrocks of their hurricane-ravaged communities,” said Chelsey Youman, Counsel for First Liberty. “Thanks to the Trump administration, thousands of houses of worship are again eligible for FEMA relief just like everyone else and can start the process of rebuilding.”

With the stroke of a pen, the Administration would be able to rescind the unconstitutional religious ban found in FEMA’s Public Assistance Program and Policy Guide (PA Policy Guide). The PA Policy guide specified that churches and religious nonprofit organizations were ineligible to apply for and receive public assistance on the same terms as their non-religious neighbors.

These guidelines were published and re-issued in previous administrations, including President Obama’s, and excluded houses of worship from receiving federal aid purely because they were churches.

Earlier in 2017, Trinity Lutheran of Columbia, Inc. v. Comer addressed the issue of churches and religious institutions being eligible for public assistance. In that case, a Missouri church applied for relief under a certain state program. Even though the church met all the necessary qualifications to receive the requested assistance, it was denied for being a religious entity.

The U.S. Supreme Court ruled in favor of the church, holding that the Free Exercise Clause of the First Amendment to the U.S. Constitution protects religious observers against unequal treatment by the government.

CHURCHES HELPED OTHERS IN NEED, WHILE DENIED FEMA AID

The toll inflicted by these storms was overwhelming. As a Category 4 hurricane, Harvey hovered over southeast Texas and Louisiana for days, unleashing record-setting rainfall and trapping over 17,000 people in treacherous floodwaters. In its wake, Harvey demolished thousands of homes and displaced 30,000 individuals. The fierce storm claimed the lives of 71 people and $200 billion in economic loss.

Only weeks later, Hurricane Irma struck Florida causing millions of homes, businesses and other entities to lose power for days. As with Harvey, many homes and other buildings were wiped out, and 34 deaths were confirmed.

In many of the affected areas, people turned to the places closest to them – at times the only places they could go: their local church. At the height of a crisis and despite suffering crippling damage, churches and houses of worship in both Texas and Florida provided vital assistance to the people in their neighborhoods and communities.

A SIGH OF RELIEF

First Liberty’s clients – as well as hundreds of other churches – can now breathe a little easier.

Pastor Jorge Cardenas from Church on the Rock Katy responded to the Trump Administration’s recent announcement:

“I am speechless at the moment. This goes to show you that the faith community is an important component of society and being able to get help enables us to keep serving our community. Thank God and also our President. We have to continue praying for him because he has been very in touch with the faith community.”

The Administration and FEMA’s actions recognize the First Amendment rights of churches and religious nonprofits, and will also help distressed churches and communities with recovery after months of struggle.